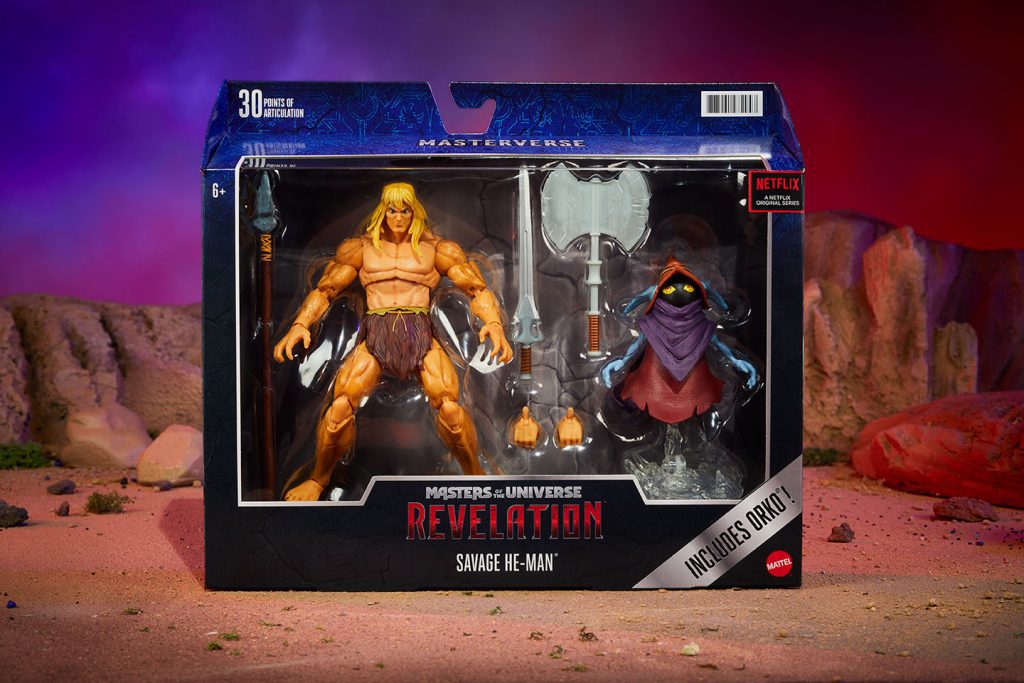 Few characters in the Masters of the Universe franchise have so much mystery surrounding them as the legendary savage version of He-Man. Inspired by a unique Mattel promotion in the early 1980s, fans have never before learned the true backstory of this iconic and elusive character, nor seen him represented on screen. Today, with the announcement of Masters of the Universe: Revelation Part 2 , longtime fans will be delighted to learn that Savage He-Man is being reimagined for our beloved fans in content as well as with a new incredible action figure.

For years it was assumed that Prince Adam could only call upon the Power of Grayskull using the Sword of Power, but Adam himself always wondered what would happen if he called upon the power without the sword. We now know the answer: Savage He-Man.

With the full Power of Grayskull unleashed inside him, Adam gains a combination of primal rage and all of the power in the universe – the raw fury, the brutal strength, and the unbridled speed of ten He-Men! But without the Sword of Power to temper these mighty forces, Savage He-Man is all strength with no intellect to control it. The barbarian version of our hero leaves his friends wondering if Adam is truly present within the transformed beast, as he tears through Eternia in an uncontrolled frenzy. Luckily, Adam at his core possesses innate compassion, humility, goodness that rivals the Power of Grayskull itself. Only the Prince of Eternia could wield such Power and be both willing and able to relinquish it once the battle is won.

While fans will soon have the chance to see this legendary savage version of He-Man  on Netflix for the epic conclusion of Masters of the Universe: Revelation in a showdown against Skelegod, they will also, for the first-time, have the opportunity to bring this hero home in a completely unique form to add to their collection. Joined by Orko, Eternia’s most powerful sorcerer, Savage He-Man represents the latest in the Masters of the Universe: Masterverse series, all of which offer highly detailed designs with at least 30 points of articulation for extreme pose-ability and come with each character’s unique accessories. The duo will be available at retailers in 2022.

The Netflix animated series Masters of the Universe: Revelation is a radical return to Eternia™, and the Masterverse collection brings the reboot to life with equally radical action figures. Each deluxe-styled figure is approximately 7 inches tall and designed with a high level of detail fans will love. Featuring heroic warriors and villainous foes, the character figures come with swappable hands and multiple accessories for epic storytelling and displays. For collectors and fans who treasure the MOTU™ legacy and its expert revitalization, these Masters of the Universe™ deluxe figures are must-haves.

Earlier this year, we introduced the first wave of Masterverse figures. The latest assortment from the next wave of the Masterverse action figure line is available at retailers now and also includes:

We hope that our reimagining and reintroduction of Savage He-Man, along with these latest heroes and villains of Eternia, offers a modern interpretation that will delight our deserving fan community. We can’t wait for you to check them out and tune into the epic conclusion of Masters of the Universe: Revelation on November 23!