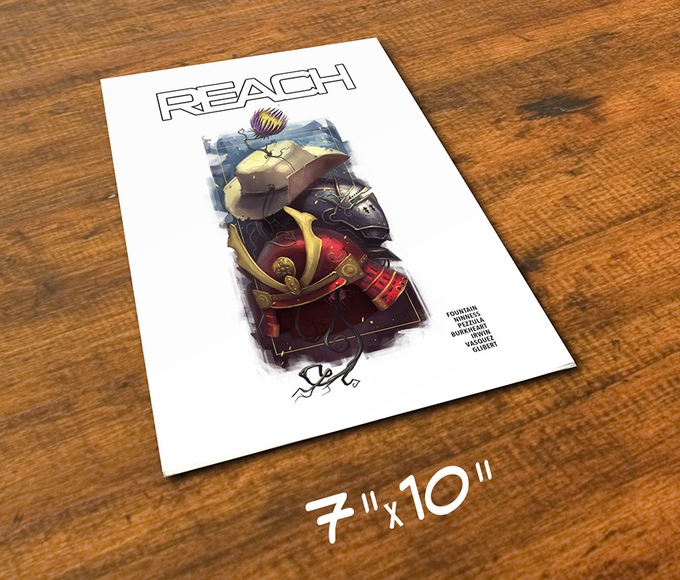 It is time once again to shine the spotlight down on a well deserving Kickstarter project: this time, its the graphic novel, Reach. So, without further adieu…

What is Reach? Here’s straight from their Kickstarter page:

Reach is a three-part adventure that follows a family line over three distinctly different time periods as they pursue a particular type of mythical treasure. We begin in the time of King Richard, through to the samurai of the Sengoku Period, and eventually arriving in the American West.

Three distinct stories, each self-contained as a stand-alone tale, connecting over the centuries to manufacture a single narrative of warning to all those who would overextend their…reach.

This Kickstarter campaign is for the entire book. All three stories are here. It’s done. If we get this thing funded, REACH is finished. So don’t worry, you won’t have to wait for another volume because there isn’t one. Support this and get the whole shebang. The finished book will be between 80 and 100 pages.

From creators Joe Pezzula, Scott Irwin, Michael Drace Fountain, Chris Burkheart, James Ninness, Mike Vasquez and Ben Gilbert, the project looks and sounds like a winner. They have some sample pages up on the Kickstarter page, and I must say, this looks promising. Pledge levels include digital copies, physical copies, and packages with prints from various artists. My favorite print is the “Yoshida” print by Joel Gomez. Just amazing.

Check out their Kickstarter at https://www.kickstarter.com/projects/879969337/reach-a-graphic-novel.