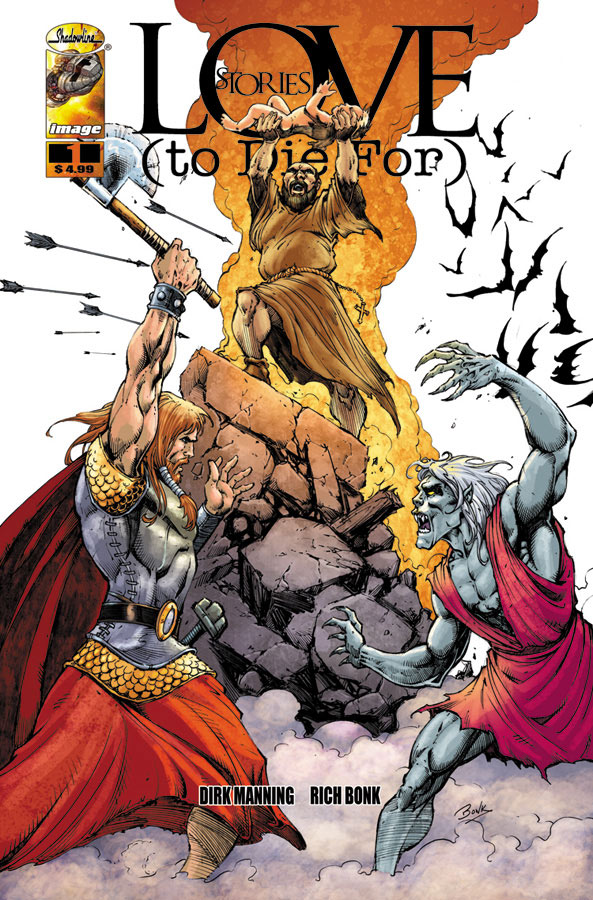 (California)– One comic. Two stories. One shared theme: love in the face of death. A group of savage Vikings in 946 A.D. are pitted against a band of equally-savage vampires to protect a monastery from invasion in “Bloodlust: Deceiver of the Gods.” Thousands of years later in the far-flung future, a man fights his way through an alien-infested space ship in an attempt to return to his wife and escape to safety in “Symptom of the Universe.” Written by Dirk Manning and drawn by Rich Bonk and Owen Gieni, respectively, LOVE STORIES (TO DIE FOR) #1 is a full-color one-shot 48-page flip book published by Image Comics/Shadowline that hits stores on September 4 for $4.99.

LOVE STORIES (TO DIE FOR) #1 features two full-length stories in one attractively-priced flip book with two covers, one on each side. Both tales explore the intersection of love and life, death and hope, and what happens when a person is forced to choose between one or the other. One man must fight his way through vicious monsters in order to return to the love of his life. Another must fight vampires alongside his men while pursuing justice.

Writer Manning says, “The best horror stories usually revolve around the premise of morals versus survival, and these two stand-alone tales explore this theme in different settings and genres.”

LOVE STORIES (TO DIE FOR) #1 arrives in stores on September 4 and can be pre-ordered now from the July issue of Previews (JUL130432).