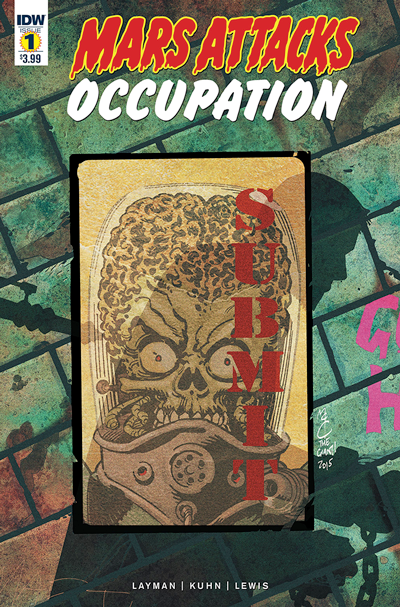 (Victor Valley)– When Mars Attacks hit theaters in 1996, it generated lots of laughs and became an instant cult classic. With the looks of a B-movie and an all-star cast, the Tim Burton helmed film left an impact among sci-fi and Burton fans alike.

Twenty years later, IDW has revisited the world after the conclusion of the movie. While the movie ended with the defeat of the invading Martians, this story begins after Mars has attacked again and succeeded in overthrowing the Earth. Humanity is in chains and the aliens have begun rebuilding destroyed cities in the image (and names) of their own using involuntary human labor.

At the heart of the story is Ruby Johnson. A young woman who is trying to find her way in this new and dangerous world. When an alien sympathizer from her past decides to make trouble for her, she finds herself captured and in danger of execution, or worse.

John Layman does a great job of changing the tone from a campy looking Tim Burton film to a serious story of a defeated and oppressed humanity enslaved by alien invaders. While the feel of the series and the movie differ, the transition in tone appears seamless as the comic thrusts the readers into the newly conquered world where the movie was only the first chapter is a much larger story.

At first, I was skeptical of a comic series based upon a 20 year old campy movie, but Layman delivers an intriguing story that ends on a captivating cliffhanger. Mix that with amazing pencils and ink by Andy Kuhn and Jason Lewis (who make the Martians look even more terrifying than they were in the movie), and fans of the movie and series have the ingredients for a winning comic. Throw in a hilarious note from Denton Tipton where he channels his inner Kent Brockman (“I, for one, welcome our new Martian overlords”) and this issue really sells itself.

Rating: 9.5 out of 10. IDW continues their hot streak of taking existing properties into new and exciting directions with Mars Attacks: Occupation.