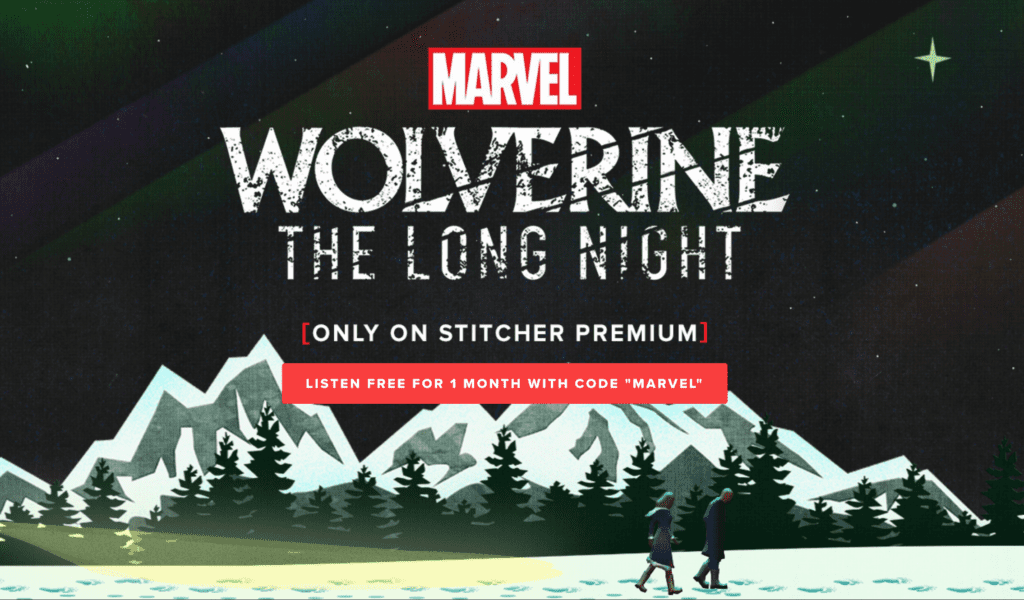 Early praise for the show highlights its “shrewd sound design” and “clear and compelling” action. Vulture.com calls it “a bold experiment for Marvel,” and Wired says “sound design has never mattered more” and that the show successfully “manages to place the listener truly within the story…”

The “Wolverine: The Long Night” story is a captivating hybrid of mystery and the larger-scale fantasy of the Marvel Universe. It follows agents Sally Pierce (Celia Keenan-Bolger) and Tad Marshall (Ato Essandoh) as they arrive in the fictional town of Burns, Alaska, to investigate a series of murders and quickly discover the town lives in fear of a serial killer. The agents team up with deputy Bobby Reid (Andrew Keenan-Bolger) to investigate their main suspect, Logan (Richard Armitage). Their search leads them on a fox hunt through the mysterious and corrupt town.

“This is a story about deception, unreliability, identity, atonement, and man in the wild and the wild in man,” said Ben Percy (“The Wilding,” “Red Moon”), show writer and award-winning comic book author. “Every character has a secret. Every scene has a question mark at the end of it. And I can’t wait for you to hear the phenomenal actors who have brought the story to life — and the next-level sound design that make this audio drama like nothing you’ve ever heard. SNIKT!”

In addition to Percy, Stitcher and Marvel have assembled a production team of veterans from both the comic world and podcasting industry, including director Brendan Baker (formerly a producer for Radiotopia’s “Love & Radio”), and sound designer Chloe Prasinos (formerly a producer for Gimlet’s “Reply All”). The series is produced by Daniel Fink of Marvel and Jenny Radelet of Stitcher.

“It’s been an honor to work with Marvel, Stitcher, and our entire cast and production crew to bring Wolverine’s story into audio,” said Baker. “I’m so proud of what we’ve made together, and can’t wait to finally share it—with Marvel fans and podcast fans alike. So put on a nice pair of headphones, close your eyes, and experience this Marvel story where you create the pictures in your mind.”

The process behind the making of “Wolverine: The Long Night” brings Marvel’s storytelling expertise into the podcasting world, breaking new ground for the medium. To provide listeners a sense of immersion into the story, outdoor scenes were recorded in realistic-sounding locations including forests and a cabin. In the studio, actors were recorded in an ambisonic — or fully surround-sound — environment, allowing them to move, interact with one another and fully inhabit their characters.

“We are excited to officially launch ’Wolverine: The Long Night’ and bring a truly unique storytelling experience to our fans,” said Dan Silver, vice president, head of platforms and content for Marvel New Media. “We are thrilled with the enthusiasm for this project from our fans and the podcast community, and look forward to exploring the medium in the future.”

Marvel Entertainment, LLC, a wholly-owned subsidiary of The Walt Disney Company, is one of the world’s most prominent character-based entertainment companies, built on a proven library of more than 8,000 characters featured in a variety of media over seventy-five years. Marvel utilizes its character franchises in entertainment, licensing and publishing. For more information visit marvel.com. ©2018 MARVEL

Stitcher is one of the world’s most popular podcast listening services, with a growing network of original content and a premium subscription service. Stitcher is part of Midroll Media, a leading podcast company that is also home to the Earwolf network and its top-ranked comedy podcasts and the Midroll advertising network, representing over 300 of the world’s largest podcasts. With offices in Los Angeles, New York City and San Francisco, Midroll was founded in 2010 and is a wholly owned subsidiary of The E.W. Scripps Company (NYSE: SSP).