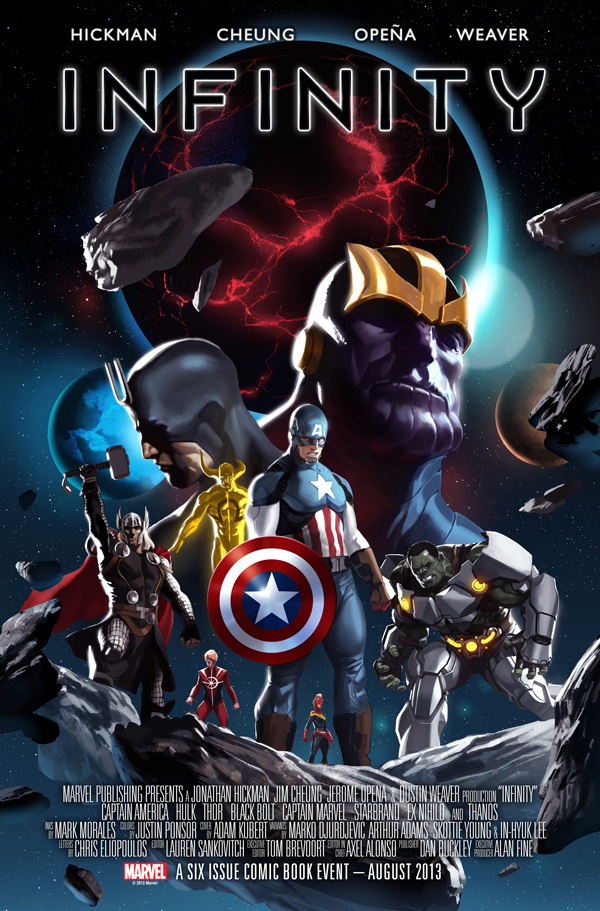 Check out the movie poster like variant cover for Infinity #1, and check out the info from Marvel below. This is Marvel’s next big event, and look who it is on the cover…the same guy from the end of the Avengers movie… (NO, not Red Hulk or Red Skull…why would they be in space???) THANOS!!!

This August, the Marvel Universe prepares for the biggest battle it’s ever faced – but first, Marvel is proud to unveil the jaw dropping variant cover to Infinity #1 by Marko Djurdjevic! Infinity, the six part blockbuster comic event of the summer, brought to you by the star studded creative team of Jonathan Hickman, Jim Cheung, Jerome Opena & Dustin Weaver, takes fans to every corner of the Marvel Universe, and beyond! Earth has been marked as an “Avengers World”, protected by Iron Man, Captain America, Thor and more from the deadliest threats facing humanity. A powerful and destructive race is on a collision course with Earth and the only thing in their path is the Avengers! But even Earth’s Mightiest Heroes realize the one hope of defeating this dire threat is to unite every great hero across the cosmos…because only with a united Avengers Universe is there any chance of survival!

With our heroes at the other end of the universe, who is left to protect Earth? Enter Thanos, the galaxy’s most ruthless threat and an unparalleled force of brutality who brings order to the chaos of life through murder. The greatest threat to the Mad Titan’s work—and perhaps the universe’s greatest hope—is something he created leaving no world safe. Earth’s last hope may lie in the hands of a man who can level cities with a single whisper – Black Bolt, king of the Inhumans. But can the fearsome leader of a race hated and feared by his world,  lead his people against Thanos? If they fall, so does the Earth—and the entire universe with it.

Readers get their first look at Marvel’s Infinity for free on Saturday, May 4th as part of Free Comic Book Day with FCBD: Infinity. In this all-new story by the blockbuster creative team of Jonathan Hickman and Jim Cheung, witness the opening shots of the war that will be heard around the galaxy. Plus, relive Thanos’ first solo story which has never been reprinted till now!

Every issue of Infinity includes a code for a free digital copy of that same comic on the Marvel Comics app for iOS and Android devices. Additionally, each issue of Infinity features special augmented reality content available exclusive through the Marvel AR app – including cover recaps, behind the scenes features and more that add value to your reading experience at no additional cost.

For more on Marvel’s Infinity, please visit www.marvel.com. Join the conversation on Twitter with hashtag #MarvelINFINITY and don’t forget to follow us at @Marvel [www.twitter.com/Marvel]!