Marvel let loose today with four MORE teasers for Marvel NOW. VERY excited for three of these, one I don’t know much of. So, let’s get on to the teasers!!!

Soldier: This is the sentinel of liberty, Captain America! This is the one I am MOST hyped for, and for good reason! Rick Remender, who I have been a fan of since his Image Comics work (Sea of Red and Strange Girl are AMAZING), has been making some of the best Marvel books around, with Venom and Uncanny X-Force to his credit. John Romita Jr.: what more can I say about the man? Romita is one of my favorite artists of all time, as I have entire runs of what this man has done. To top it off, I met both of these guys at Comic Con throughout the years, and both we awesomely nice guys! 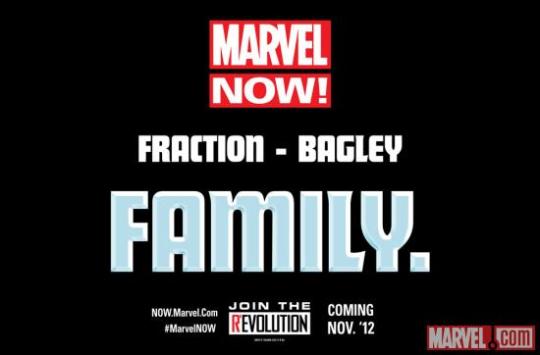 Family: This is an easy one: Marvel’s first family, the Fantastic Four. Now, this is another sure fire hit in my opinion. Fraction is one of the best modern day scribes, with his Immortal Iron Fist making a goofy character into a unstoppable weapon. Mark Bagley is my FAVORITE artists of all time: his Amazing Spider-Man is the definitive Spider-Man in my opinion, and to see him on such a huge book is great news! Remember when DC had Bagley and put him on that god awful Justice League that had more Teen Titans than leaguers? Thanks for being back with the house of ideas, Mark!

Extended: Many think this points towards the Future Foundation, or better known as FF, and I agree. With Fraction tackling the four, it makes sense to have him on the sister book as well. Allred always amazes, so this looks to be another book added to my November pull list.

Legacy: This is the one I am in the dark about. I know its probably X-Men Legacy, which has been an ongoing book, I am just not familiar with the creators. Do you know some of their past work to check out? If so, leave a comment!