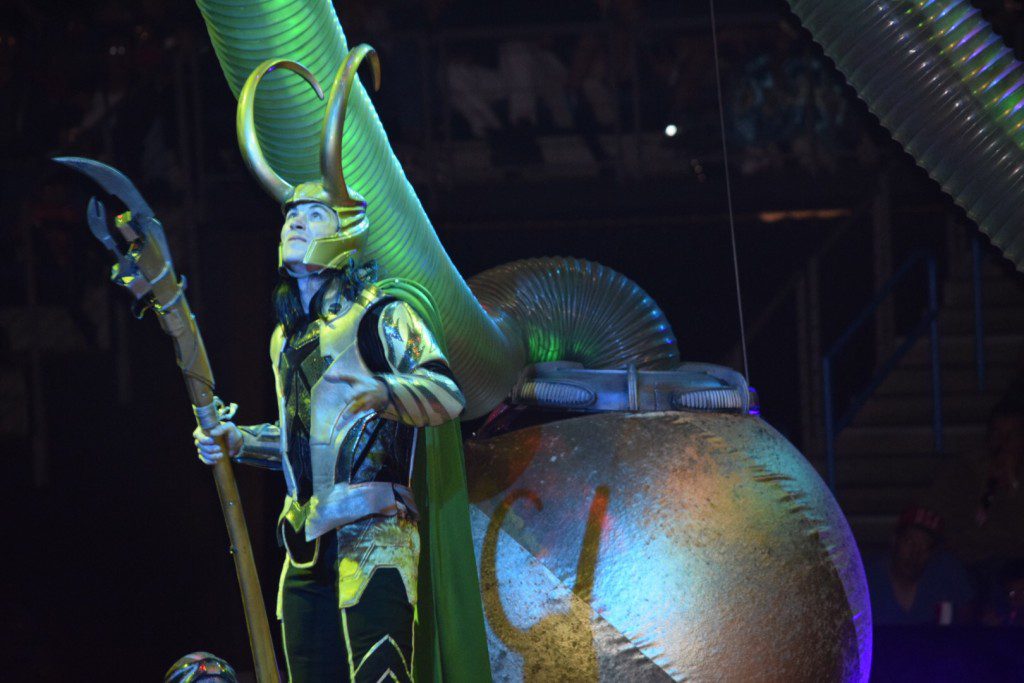 Marvel Universe Live Review: Heroes on the Stage and in Real Life

(Victor Valley)– The smell of popcorn met the troves of fans as they entered the Citizens Business Bank Arena in Ontario this past weekend for Feld Entertainment’s Marvel Universe Live. The Avengers, Spider-Man, the X-Men and more all came to life as fans witnessed a comic book springing right off of the page.

The show consisted of stunts, massive video displays, lasers, pyrotechnics, and plenty of motorbike jumps and flips. The storyline takes parts from Marvel’s cinematic universe, like The Avengers film, as well as from Marvel Comics storied history, like The Sinister Six. Told in two parts, the action packed show left fans wanting a sequel.

The show focuses on one of the most important artifacts in the Marvel Universe, the Tesseract, also know as the Cosmic Cube. When the Norse God Loki returns to Earth with plans to recreate the artifact destroyed by his brother, Thor, this brings in the heavy hitters in the Marvel Universe- Captain America, Iron Man, Spider-Man, Captain Marvel, Wolverine, the Hulk and more. Of course, every good guy needs a nemesis, and this show is chockfull of him. Assisting Loki are villainous main stays like the Red Skull, the Green Goblin, Dr. Octopus, A.I.M., Hydra and more.

Full of high quality stunts, voice acting, acrobatics, and enhanced with visual effects, this show feels like the Marvel Universe should. I was extremely satisfied by the end of the show, as was the audience as the cheers roared on.  For Moe Alafrangy, the performer who portrays the Amazing Spider-Man, the audience cheering is makes the show rewarding as it is, but it’s what he is able to do off stage that is the most fulfilling for the young martial artist. In 2010, Alafrangy was in a snowboarding accident that left him in a coma for nearly a week. His doctors told him that he wouldn’t be the same, and that he couldn’t lead the active life he loves. It was those doctors that motivated him to prove their diagnosis wrong, and he did. Now, as a part of Marvel Universe Live, Alafrangy gets to visit with children fighting their own battles, and hopefully motivate them to stay strong.

“It’s been such an inspiration to tour this county and portray this character because I am able to work with kids that have been fighting cancer, who are fighting different diseases and are struggling everyday,” said Alafrangy. “These events are set up by our manager and PR team- I’m getting a chance to go and teach them a little workshop, teach them how to roll around and share my story at the end with the kids and their parents. To see their emotions rise and to see their inspirations generating through my story to them, to me that’s been the most fulfilling part of this experience.”

The show was entertaining on all levels, and a truly unique experience for everyone, comic books fans or not. To discover more about Marvel Universe LIVE!, please visit www.marveluniverselive.com or follow us via social media on Facebook, Twitter, Instagram and YouTube. #MarvelUniverseLive @MarvelOnTour