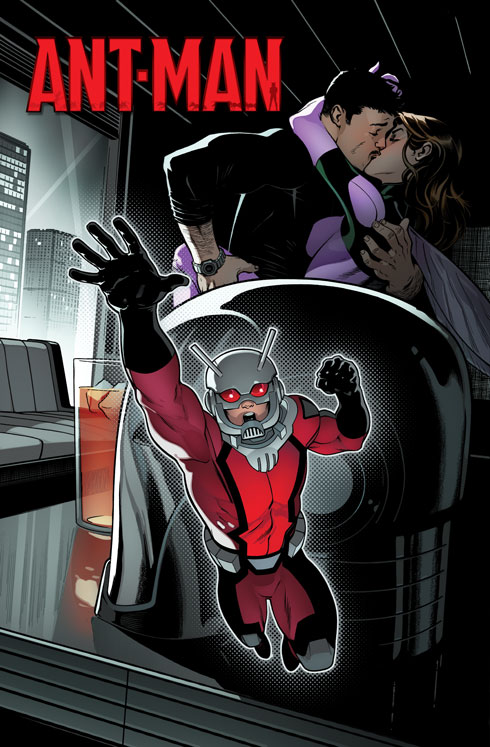 This January – the small hero with the big time heroics is ready for his shot in ANT-MAN #1, the new ongoing series from critically acclaimed creators Nick Spencer (Superior Foes of Spider-Man, Avengers World) and Ramon Rosanas (Night of the Living Deadpool). But first, Marvel is proud to present your first look at the exclusive Ant-Man #1 Shrinking Variant – available only in comic shops!

From blockbuster artist Ed McGuinness – each Ant-Man #1 Shrinking Variant is completely unique. Individually numbered, each cover features Ant-Man at a different size – small, large and everything in between. Fans lucky enough to get their hands on this highly collectable variant cover will own a unique piece of history, as no two variants are alike!

“This is completely unlike any cover we’ve ever attempted,” says Marvel SVP Sales & Marketing David Gabriel. “We’ve even had to utilize new technologies to make it happen. Each variant is completely unique. Each and every cover will feature a different sized Ant-Man. No two are identical!”

Scott Lang is ready to turn it all around in this brand new ongoing series. Sure he’s never been the world’s greatest super hero. Most people don’t even think he’s been the best Ant-Man – and the last guy created Ultron and joined the Masters of Evil, so that’s really saying something. But that’s all about to change. New city. New outlook. New Scott.

Be there for Scott Lang’s brand new day and don’t miss your chance to get your hands on this truly unique, one-of-a-kind variant before they’re gone for good! This time, nothing’s going to stop the astonishing Ant-Man! Be there when he returns to comic shops with the can’t miss ANT-MAN #1 SHRINKING VARIANT comes exclusively to comic shops this January.