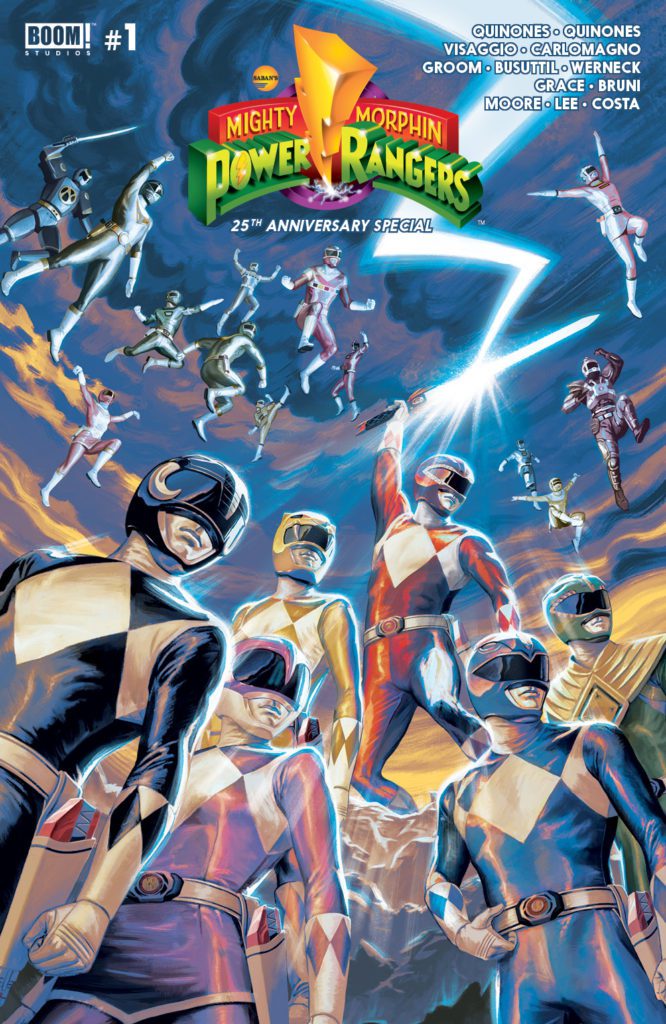 Whenever I hear/see the words “Power Rangers”, my interest is automatically piqued. I enjoy anything Power Rangers related, BOOM! Studios Mighty Morphin Power Rangers 25th Anniversary Special #1, is no exception.

This special consists of five mini-comics- Pet Project, Sealed, The Sweetest of Dreams, Golden Ideas, and The Trial of Astronema.

Pet Project, written by Jessica Quinones and illustrated by Joe Jones, consists of Scorpina and Rita coming together to try to trick Tommy by the adoption of a “dog”. They want to drain his powers and take control of him again.

In Sealed, written by May Groom/Michael Busittil and illustrated by Lucas Werneck, Lord Zedd sends Goldar to Angel Grove to try to annihilate the Power Rangers. He finds two new rangers, Aisha (the yellow ranger), and Adam (the black ranger), alone trying to finish one of Billy’s experiments in hopes to prove themselves to the other rangers. Goldar goes in for his attack, little did the new rangers know they were being watched by the other rangers while all of this went down.

The Sweetest of Dreams, which was written by Magdalene Visaggio and illustrated by French Carlomagno, is about a woman by the name of Udonna who has a dream that her husband LeanBow may still alive. With the help of the Mystic Mother, her spirit travels to Leanbow to try to reach out to him, but there is no response, all while running into a ranger who is kept unknown.

Golden Ideas, written and illustrated by Sina Grace, is probably my favorite mini in this series! Alpha 5 makes an appearance with an urgent request for the Rangers. He needs the rangers help in preventing a monster from entering the barrier into their dimension that Rita Repulsa had freed over 25 years ago. The previous Rangers weren’t able to destroy it, only push it back into through the breach.

And lastly, The Trial of Astronema, written by Trey Moore and illustrated by Dajung Lee, is about a lady named Karone or better known by her victims, Astronema. Astronema was the galaxy’s most wanted criminal and is on trial to be condemned for her actions. Her brother, Andros, ends up coming to her rescue, or so he thought…

Overall, I really enjoyed this 25th-anniversary special, it brought a little bit of past and present Power Ranger content to the table, which was fun to read!