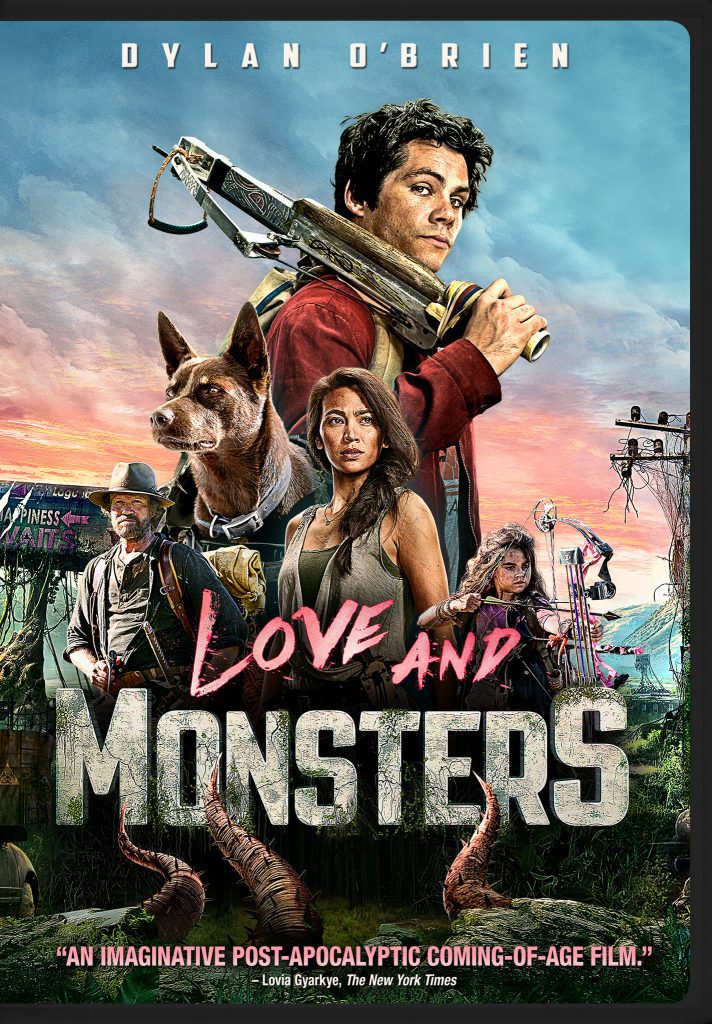 In the tradition of Them! and Eight Legged Freaks comes Love And Monsters, a post-apocalyptic story about giant monsters, survival, and of course, love.

The story is about the epic romance between Joel and Aimee. Well, it’s about the romance that would have been if a giant asteroid wasn’t flying towards the earth. It actually wasn’t the asteroid that created the problem; it was the missile we shot at it, which spread radiation, which in turn mutated bugs into giant man-eating nightmare creatures causing humanity to live in colonies underground. They called it The Monsterpocalypse.

After several years with his colony and apart from Aimee, who now lives in a coastal colony 80 miles away, Joel reconnects with her and starts to fall in love all over again. Despite having no survival skills once so ever, except for being able to make a killer minestrone, he ventures out into the wild to be with her again. He might make it, he might not, but to him, it’s worth the risk.

Love And Monsters is a rare thing these days. While there are a ton of Sci-Fi monster movies, and with the exception of Godzilla or King Kong, this is a big-budget giant monster movie made for the big screen. But it’s 2020, and we can’t have nice things, so we are forced to watch it at home on the comfort of our couch. And to be honest, it’s a perfectly enjoyable film to watch with the ones you love.

There is so much to like about this movie, with the performances being at the top of that list. Dylan O’Brien is awkwardly charming as Joel, a young man who has been through some stuff. His family is gone; he has no life skills other than cooking and being very small and able to hide. He has a deep fear of everything and freezes up at the first hint of danger, which makes him seem like an unlikely hero, but he somehow manages. Michael Rooker makes an appearance, and the movie begins to take a turn towards Zombieland territory, without completely reaching that point. Think of Joel as Tallahassee’s Columbus, and you’ll understand what his character is like.

There is a host of other actors in the film, including Jessica Henwick, Ariana Greenblatt, Rooker, and a host of others, but the real scene-stealer isn’t human at all. A dog named Hero (and his double Dodge) plays Boy, and let me tell you, he is a real treat to watch. As a former dog trainer, it often stuns me how well trained a lot of these animal actors are. Boy felt like more than just a canine sidekick; he felt like a real companion to Joel on his journey. Credit must be given to Hero, Dodge, trainer Zelie Bullen and the filmmakers for giving us such an enjoyable and emotion-filled performance from him.

Seeing as it’s a movie based in a world overrun with giant mutant bugs, It’s no surprise that yes, there are giant mutant bugs. A lot of them. And they look really cool. The special effects in this movie are impressive, and it’s also a part of what separates it from your Syfy monster movies. Although those are enjoyable in their own way, the effects often leave much to be desired (I get it, smaller TV budgets and all). Here it all looks fantastic, and they blend in perfectly with the world around them.

Directed by Michael Matthews, with a script by Brian Duffield and Matthew Robinson, this is the real deal. Having Shawn Levy (Stranger Things) as a producer, it’s not hard to imagine he helped with the John Hughes-esque romance, comedy, and heart throughout the film. It has that kind of magic flowing through its veins. Love And Monsters is a lot of fun, and it’s highly recommended for an entertaining movie night.