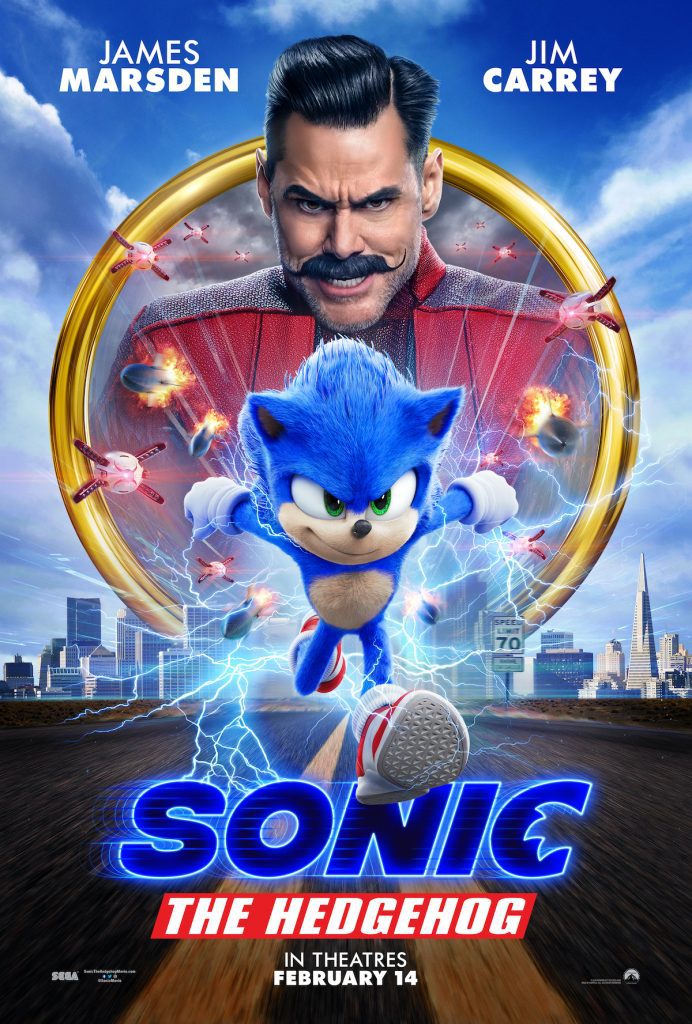 In the big-screen adaptation of the popular video game franchise “Sonic The Hedgehog,” Sonic must speed his way to San Fransisco to save himself and his best friend, Tom. Right behind them is the villainous Dr. Robotnik, who will stop at nothing to take down the speedy blue hedgehog and find out what makes him tick. What ensues is a wild, silly, action-packed, and entertaining film that everyone can enjoy.

As the film opens, we see Sonic as a child, living comfortably with his guardian, Longclaw, the Owl. One day, a brutal tribe of echidnas goes after Sonic to take his powers of supersonic speed. To protect him, Longclaw gives Sonic a bag of rings that can transport him to different worlds, using one to send him to Earth. He lands in the sleepy town of Green Hills, Montana, where he secretly lives for the next ten years. He keeps a low profile, even though he longs to make friends. One of his favorite people is the local sheriff and “donut lord” Tom Wachowski (James Marsden).

After a baseball game against himself (in one of the movies more ingenious moments), Sonic accidentally causes a power surge in the town and creates a blackout throughout the Pacific Northwest. This attracts the attention of the United States Department Of Defense, and they enlist the help of genius scientist Doctor Robotnik (Jim Carrey). While dealing with the blackout, Sheriff Tom is startled by the appearance of Sonic, and accidentally shoots him with a tranquilizer dart. But before he goes down, a ring is laid down, and his bag of magic rings is transported to San Francisco. When Doctor Robotnik finds one of Sonic’s quills during his search, he realizes that it harnesses the energy to power his tech, and he becomes obsessed with finding the creature it came from.

Now being labeled a domestic terrorist, Tom reluctantly agrees to go on an adventure with the blue hedgehog to retrieve the rings, clear his name and save his new best friend.

When the first trailer for the film dropped last year, I was among the many that were disappointed by the design of the titular hedgehog. It was understood what they were going for, a more realistic version of Sonic, but something about it felt off. In an unprecedented move from the studio, they listened to the fans and went to work on redesigning him. This caused a slight delay in the release date, but the hard work and dedication from the production team led to a character design that everyone could get behind. And it paid off for Sony, as the newer, more classic version has helped connect the audience to a character they have known and loved for almost 30 years.

On top of the design, they really captured the essence of Sonic by casting “Parks & Recreations” alum Ben Schwartz as his voice. He brings a real playfulness to the role, and keeps the fun and edgy attitude we have grown to love about the character. No stranger to working alongside CGI characters, James Marsden seems to be having a lot of fun here, delivering most of the film’s most memorable laughs. And then there is Jim Carrey. Being a teen in the ’90s, he was inescapable and quickly became one of my favorites. I absolutely loved him, and it’s so good to have him back in classic form. His performance as Robotnik is full of energy and charm, just like the good old days. It’s great to see that from him again, and I hope we see more of it in the future.

Video game movies are tough to pull off, but Sonic The Hedgehog delivers exactly what it promises; a fun family film. The story and characters aren’t very deep, but there is nothing wrong with that. Much like the games, it’s meant to be fun and entertaining. There are scenes that are pure joy and bring on a wave of nostalgia. I’m not going to give anything away, but there is a mid-credit scene that is a hint of what’s to come, and I’m here for it.

I will be the first to admit that I was doubtful going into this film. I wasn’t sure what to expect, but it turned out to be a welcome surprise. It is a lot of fun, so don’t let this movie zoom past you. Go check it out!