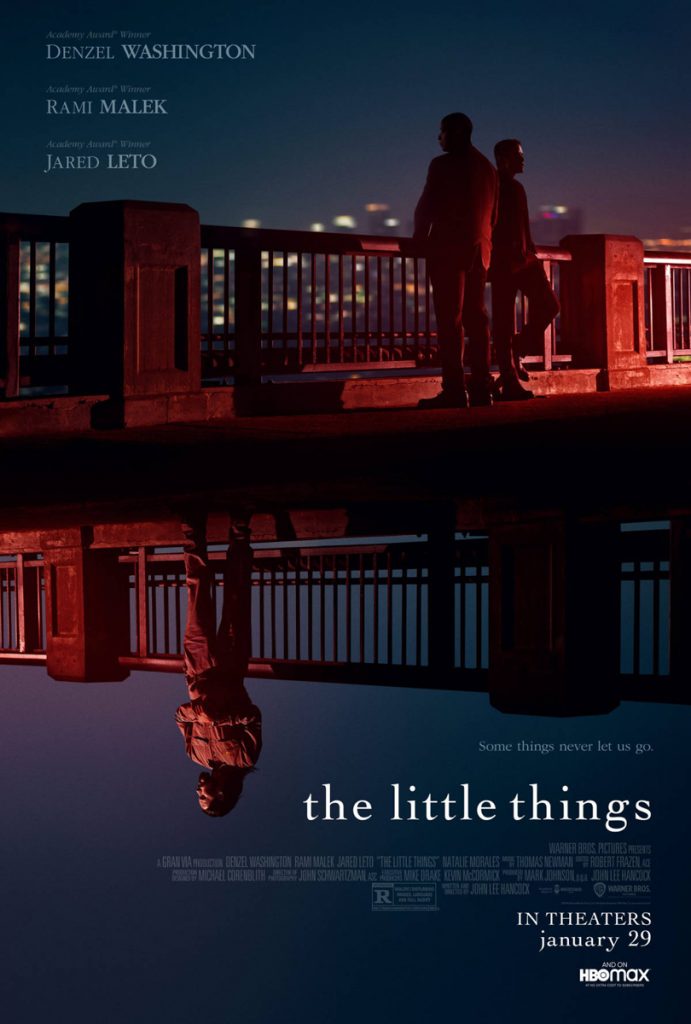 The most recent film in Warner Bros. 2021 film slate to hit theaters and HBO Max, The Little Things falls short of being memorable. It’s a perfectly fine thriller with some decent performances, but it’s not nearly as good as the films that it’s pretending to be.

In the movie Denzel Washington plays Joe “Deke” Deacon. A sheriff deputy for the Kern County Sheriff’s Department, he is being pushed into retirement by his superiors. While visiting Los Angeles to collect forensic evidence for a case, he accompanies lead detective Jimmy Baxter (Rami Malek) to the scene of a murder. Matching the M.O. of an unsolved series of murders he was working while he was a detective in Los Angeles years before, he becomes obsessed with finding the killer and putting the past behind him.

The movie has some great actors and a solid premise, but it’s the execution that is ultimately it’s downfall. You have the stereotypical new wide eyed detective who is going to solve this case. He’s cocky and thinks he knows everything. Rami Malek plays Baxter with so much smugness that it’s sickening, and we know where his arc will lead him. It will go down a path of self righteousness and that will ultimately be his downfall.

Denzel is at that point in his career where he is playing the older gentleman who people should know better than to mess with but they still do. There is a subtlety about his performance, like a time bomb waiting to go off. Much like Morgan Freeman in Seven, he needs to solve this case before he can rest easy when he retires. It’s the same old game just played by a different actor. Then there is Jared Leto who is playing a weird Jared Leto. It’s almost as if the filmmakers were saying, “hey, this guys weird! He could be the killer, don’t you think?” to the audience the whole time.

What makes or breaks a movie like this is how it grips you. It’s how it makes you feel about the case and the characters involved. This killer is the absolute worst of the worst, killing young women for the thrill of it. This movie never puts any urgency into that aspect of it though. For better or worse, it subverts some genre expectations and focuses on those solving the case as opposed to the crimes themselves. But on every other level it’s exactly what you have seen and read before, just not as good.

The Little Things is the safest kind of rated R thriller, one that appeals to as broad an audience as possible. It works on that level, as a serviceable mystery, but that’s about it. Director John Lee Hancock is known for making simple crowd pleasing movies (The Blind Side, Saving Mr. Banks), and the only thing that sets this one apart is it’s darker subject matter. If you are into that kind of thing you might find it to be just fine. Otherwise you can skip it.