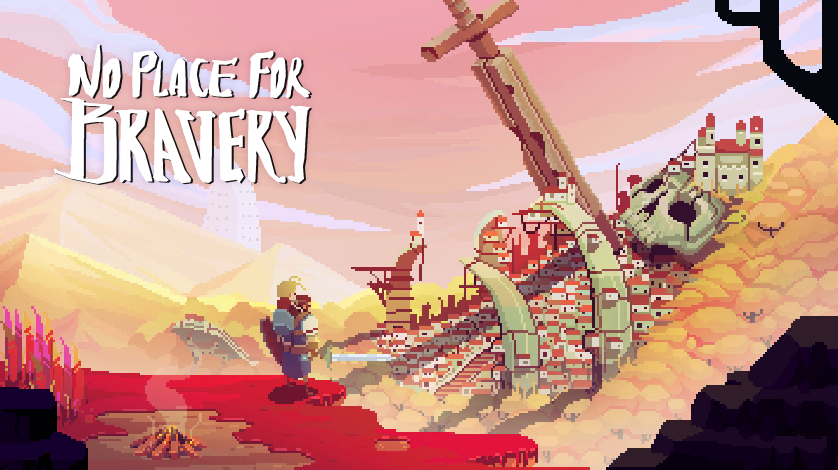 No Place For Bravery, Brutal Action-RPG with Haunting Narrative, Storms available now for Switch and PC

No Place For Bravery, the story-driven action-RPG from Glitch Factory and Ysbryd Games exploring the lengths we’d go to recapture that which we hold dear, begins a breathtaking adventure on Nintendo Switch and Steam for PC.

A calamitous battle between almighty giants and dragons devastated the world of Dewr countless generations ago, and warring factions have arisen amidst the world’s ashes. Thorn, a former soldier, spends his days contemplating the scars and corpses piled up in his past. But when word of his long-lost daughter cuts through the voices he cannot silence, Thorn sets out on a vengeful quest to find her, convinced his blade is the answer.
Embark on a mythic journey across Dewr, a blood-soaked land of roving bandits and ruinous beauty. Deadly archers, nimble warriors, and colossal bosses stand in Thorn’s away, and a single mistimed move can spell doom. Master demanding yet rewarding stamina-based combat where decisive action can overcome Thorn’s fragile humanity. Make pixel-perfect dodges, split-second parries, and targeted strikes to satisfy Thorn’s bid for redemption.

Discover new instruments of war with weapons and items scattered across Dewr’s hand-crafted, pixel-art landscape. Survive combat arenas carved into the corpses of decaying titans. Emerge from sprawling deserts to lush grasslands where reed stalks jut forth like gravestones. Feel the weight of Thorn’s dilemmas and make dialogue choices to further stoke his blade of vengeance or bring his emotional odyssey to a very different conclusion.
“Inspired by our own experiences with parents and father figures, and as parents ourselves, Thorn’s complex and thought-provoking journey examines where protection and redemption become obsession,” said Matheus Queiroz, developer at Glitch Factory. “We’re thrilled to infuse the simple-yet-deep Soulslike genre, famous for testing your mettle and reflexes, with an equally challenging narrative straight from our hearts.”
No Place For Bravery is available now on Nintendo Switch and Steam for PC for USD 19.99, with support for English, Brazilian Portuguese, French, German, Spanish, Korean, Japanese, Traditional Chinese, and Simplified Chinese text at launch.