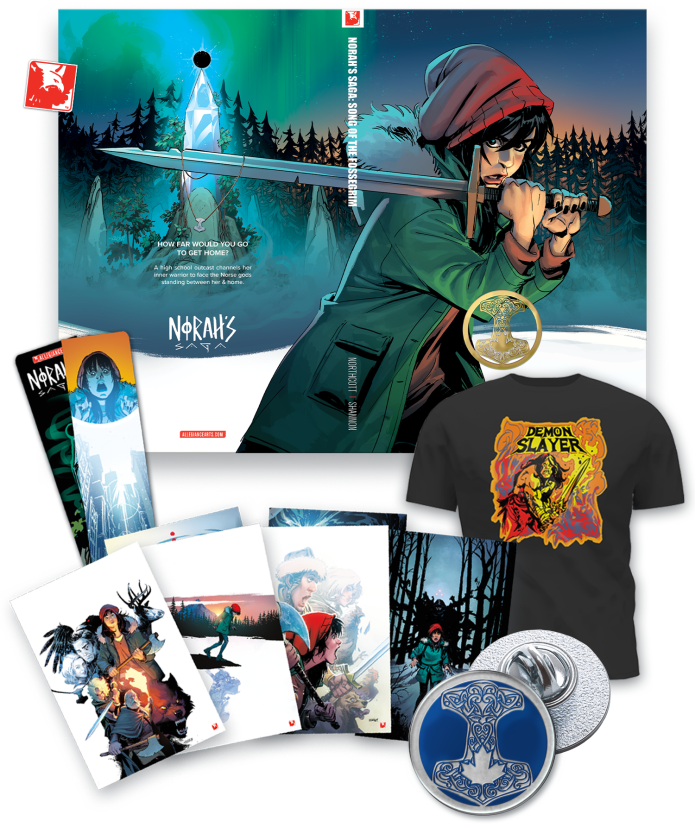 Norah’s Saga, Season One: Song of the Fossegrim IndieGoGo Campaign is Now Live-Help Complete the Journey!

Allegiance Arts has launched its IndieGoGo campaign to complete the journey of Norah’s Saga! The campaign is now live and can be backed HERE!

Allegiance Arts made a splash in their debut, from crowdfunding to being on store shelves everywhere. This campaign aims to complete the story that began with the first single issues that left fans wanting more.

Here is the info straight from IndieGoGo:

Gather your raiding party and be the first to own and read the complete first season of Norah’s Saga by Blake Northcott and Kelsey Shannon from Allegiance Arts!

Thanks to you, Norah’s Saga has sold over 30,000 episodes worldwide! The Allegiance Arts team now invites you to finish this incredible journey with us. Norah’s Saga: Song of the Fossegrim includes all six comic book episodes in one bound graphic novel.

One hundred and thirty six pages of unforgettable adventure with exciting bonus content!

From Gym Class to Warrior Class

When sassy, book-smart, high-schooler, Norah Karlsson crashes through the mists of time and into a realm of ice and Norse legend, her quest to fit in becomes an epic tale of survival where she must win over unlikely allies, defeat monstrous villains, and complete a mythic odyssey to capture the Song of the Fossegrim.

Norah’s Saga: Season One answers the question; How far would you go to get home?