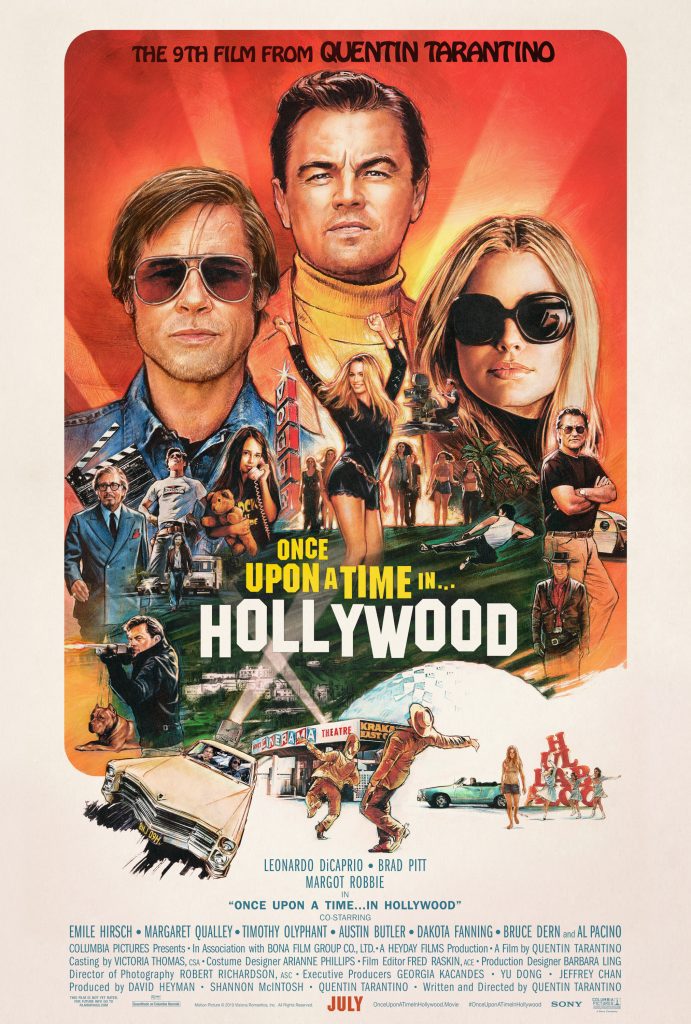 Once Upon a Time in Hollywood Review

Since the early ’90s, Tarantino has been bringing his unique brand of storytelling to audiences around the world. Love him or hate him, he does things his way, and viewers are along for the ride, which is evident from the reception and box office of his latest film, “Once Upon a Time in Hollywood.” Since it’s release, it has garnered some divisive reviews as well as some minor controversies, from its depiction of Bruce Lee to the fast and loose alteration of history. But one thing is for sure, it’s Tarantino through and through, and here are my thoughts on the film.

The movie is about aging actor Rick Dalton (Leonardo DiCaprio) and his stunt double Cliff Booth (Brad Pitt) as they traverse the changing landscape of Hollywood in 1969. Rick used to be the lead in a hit television western called “Bounty Law” but is now getting cast as the baddie and guest spots on popular tv shows. While he is trying to rejuvenate his career, his best friend Cliff is along for the ride and is trying to continue to make a living.

Rick’s new neighbors, aspiring actress Sharon Tate (Margot Robbie) and director Roman Polanski (Rafal Zawierucha), are living the high life and the Hollywood dream. Meanwhile, although they aren’t on anyone’s radar yet, the threat of Charles Manson and his cult loom over the city.

And that is the best synopsis I can give about the film. This isn’t a plot-heavy film, as much as it is a hangout movie. It’s a day in the life story, which works as an interesting behind the scenes look at Hollywood in the late ’60s, but not much else. It meanders around and doesn’t give us a cohesive story, which is a bit strange for a Tarantino film. While most of his films are considered to have hang out elements, with massive stretches of dialogue and characters just “hanging out,” they also tend to have a driving plot that takes the story from point a to point b. This film doesn’t have that through-line; it just wonders from one scene to the next.

Ok, that is not entirely true. If you know anything about the history of the Manson family and the murder of Sharon Tate, you will be filled with dread knowing what is going to happen. It’s built up throughout the film, with little glimpses of the cult wandering around Hollywood here and there, and our main characters, mainly Cliff, getting twisted in their little web. It’s a small plotline, but one that also requires a little bit of knowledge of the history to be fully effective. But it’s also one that Tarantino takes a lot of liberties with.

While the story might not be there 100%, there are a lot of things that work for the film. The cast is top-notch and are fantastic. If you are going to do a movie where you watch characters for nearly three hours, you can’t do much better than DiCaprio and Pitt. They are both believable and fit into the period. Pitt always works best for me when he’s not playing the handsome, confident, dressed down guy and playing the usual, unhinged guy next store. Much like he did as Tyler Durden in Fight Club, he steals the show and proves that he is one of the greatest actors out there, and is my favorite part about this movie. Margot Robbie is excellent with the little she got to work with as Sharon Tate and Al Pacino is a great presence as Cliff’s agent. There are some great cameos in the film as well, including Timothy Olyphant and the final screen performance of Luke Perry.

Another thing that works for this film is the beautiful set design, costumes, and the dedication to transporting us to the Hollywood of old. Everything is meticulously planned, from the old school Taco Bell logo to the cars they drive. It truly is a time capsule to another period in history, and Tarantino and the crew painstakingly recreated all of it. It looked stunning and was filmed with a lot of passion and care for the period, and the world depicted.

“Once Upon A Time In Hollywood” is a look at the glitz and glamour of Hollywood of the past. It has one foot grounded in reality, while the other is rooted in a very Tarantino like world. As mentioned before, the depiction of icon Bruce Lee has caused a slight controversy, but once you get to the end of the film and realize that it isn’t a film you are supposed to believe is real, it doesn’t matter. This version of Hollywood is a fever dream of what the filmmaker wanted it to be. Although it’s often filled with unsavory characters and violence, this version of the world is the one Tarantino wanted to live in.

Overall, the film is slow-moving and has no real plot to speak of, but it’s also filled with wonderful characters, great performances and fantastic writing. If this sounds like your type of movie, you might want to give it a look.