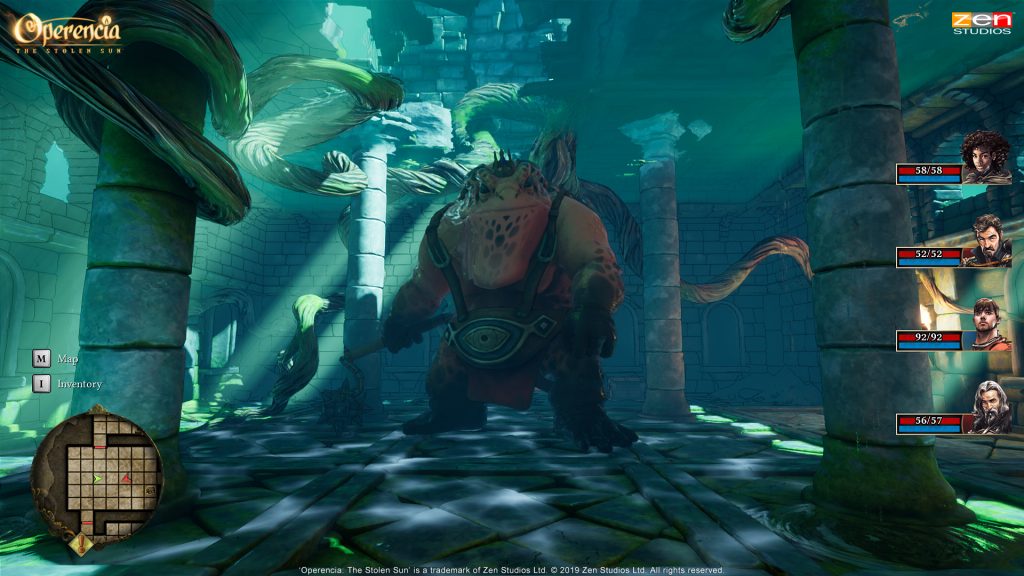 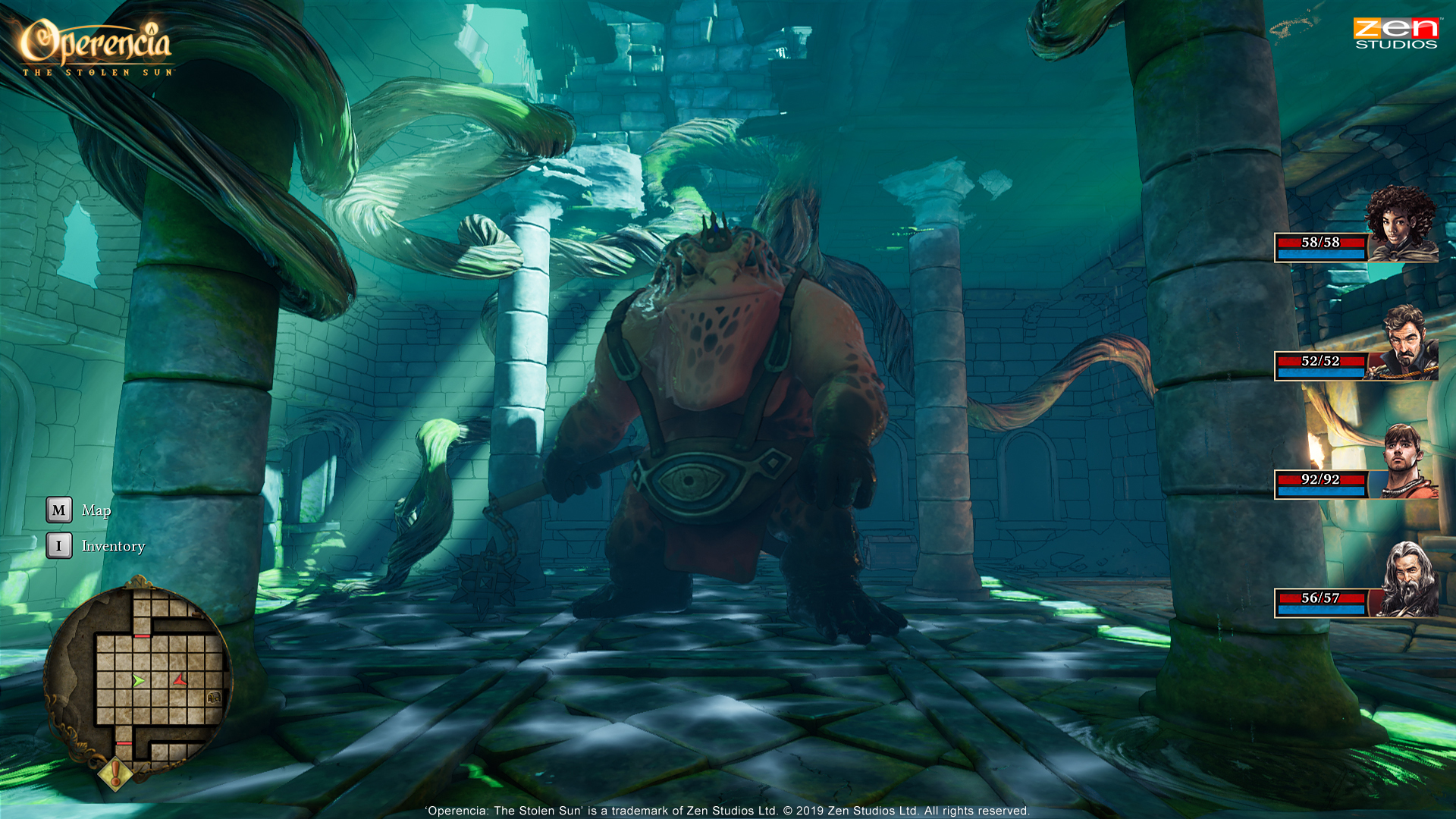 Operencia: The Stolen Sun sounds like your typical run-of-the-mill RPG. At first glance, I didn’t see anything that stood out from the rest. However, after having spent just half an hour with the game, I could tell there was something special here. You’re going to need to give it half an hour though, seriously, that intro level is terrible…

Operencia has a few difficulty settings; I usually take the mild routes as I prefer to enjoy my experience. Also, the word “permadeath” scares me to my bones. I found that the game was enjoyable while still requiring some intelligence, creating the perfect difficulty in combat as well as the puzzles, at least through the majority of the game. I’m not sure if it’s because I’m amazing at RPGs (I’m probably not), but near the end of the game I found I was blowing through battles pretty easily. The puzzles were steadily, and enjoyably difficult throughout with only a few being simplistic to the point of questioning their very existence. As far as technical difficulties or bugs, I experienced none, which in this day and age of “push games out ASAP and fix them later,” felt very refreshing.

Beautifully hand-drawn art is used for the storytelling, with a little animation sprinkled in to create visually exciting cut-scenes. Character art looks excellent, and the voice acting is top notch for some characters, abysmal for others. The visual effects from the skills or spells were a little lackluster compared to the graphics of everything else in the game. Enemy concepts are fascinating, and hold up well in the game for the most part. A few looked a little out of place like they had been pulled from a game made a decade ago. 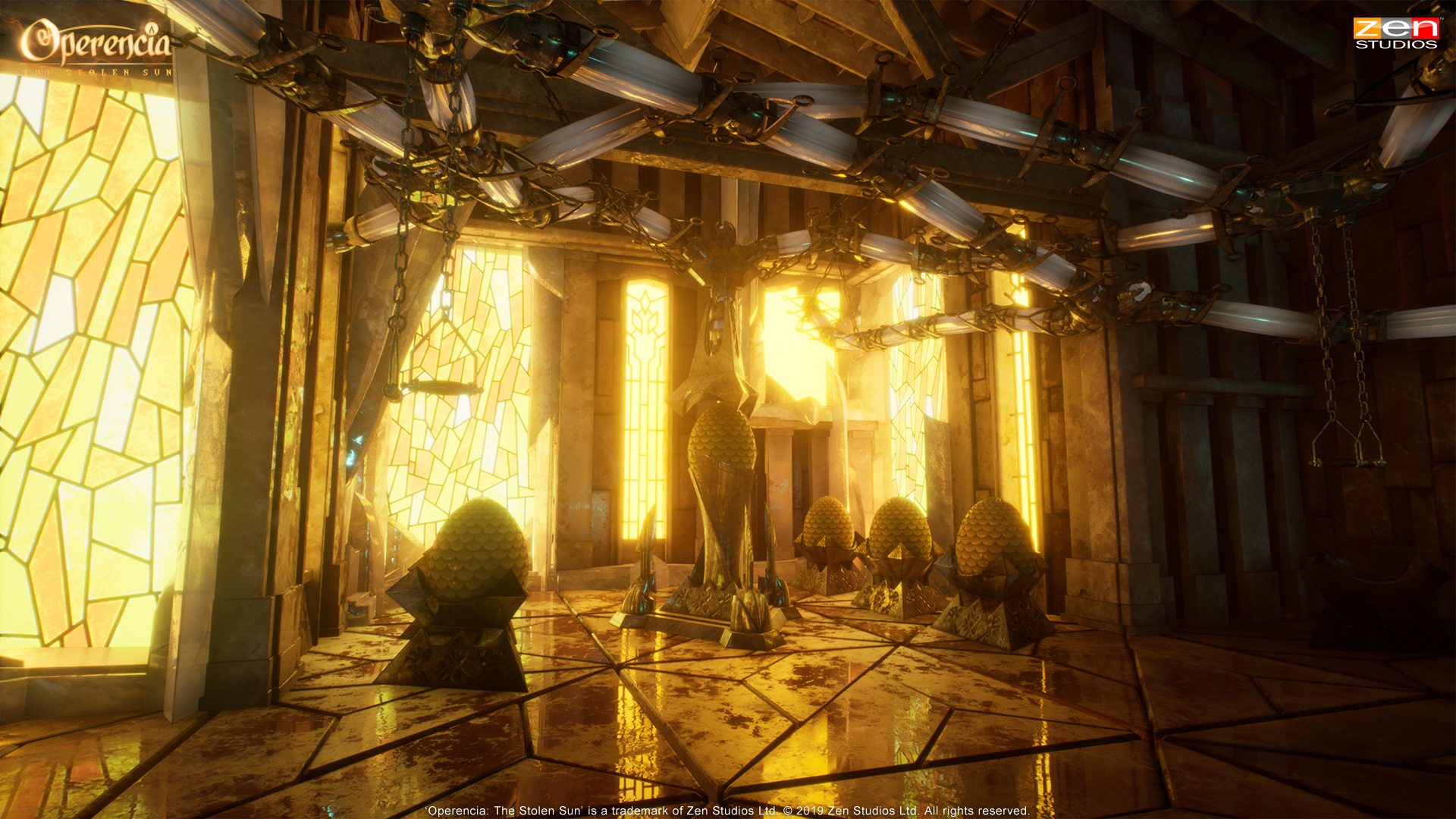 The part that blew me away the most was the design of the levels and puzzles. Right from the get-go (after the dull, terrible, no go prologue) you find yourself in an underwater castle. Magic keeps the water out, and visually it looks impressive. Water fills some of the hallways, requiring you to move quickly through them or you’ll run out of breath. If you look up, or out a window, you’ll see water suspended, and aquatic life leisurely swimming past. Puzzles start off easily enough but become real beasts themselves late in the game, requiring some real thought and work.

Music is sort of there, going unnoticed. When I remembered to listen and take notes, I realized it was good, but it feels like it’s hidden away in the background. Almost as if they were given a great score, but not really sure how to use it to its full potential. Sound effects are at times quite disturbing, in a good way, especially the screams and howls of an enemy party lurking nearby. Precisely like a monster-filled dungeon should sound. Other times it’s odd, off-putting, and sounds strangely out of place. Overall, the audio isn’t great, but not enough to give it a bad score.

The scripting can be a little cheesy, and at times its pure gold. While running around the dungeons, you will come across campfires where your party can save, rest, craft or buy items. My favorite part of finding a campsite was the short dialogue that would ensue between the characters as they rested. There were moments of genuine laughter brought on by the banter, and parts of the great lore are revealed here as well. Overall the story is exciting and engaging, and I never found myself wanting or disappointed, save for the strange prologue bit at the beginning. Have I mentioned that yet? It was terrible, could’ve been a few lines in one of these campfire stories, and it would’ve made the game a hundred times better.

I was pleasantly surprised to find that you can move the camera around in all directions as you navigate the detailed, gorgeous world. It’s not all for showing off the visuals either; there are essential items littered throughout that you can only find by taking a closer look at your surroundings. Generally in games that have you traversing over a grid map, you’re restricted to just looking in the direction you’re facing, oddly moving in 90-degree angles, and the item you need is smack dab right in the middle of your view.

I’ve always been a fan of these types of RPGs, where the step-by-step movement across the map is part of the games tactical strategy. If you sneak up behind an enemy, you can ambush them, allowing your party to go first in battle. So I was a little disappointed to find that even when the player doesn’t move, the enemies do. I understand the realism behind this but was left wondering what the point of the board-like map was. Why not just make the game free roam, like Skyrim but with turn-based battles? 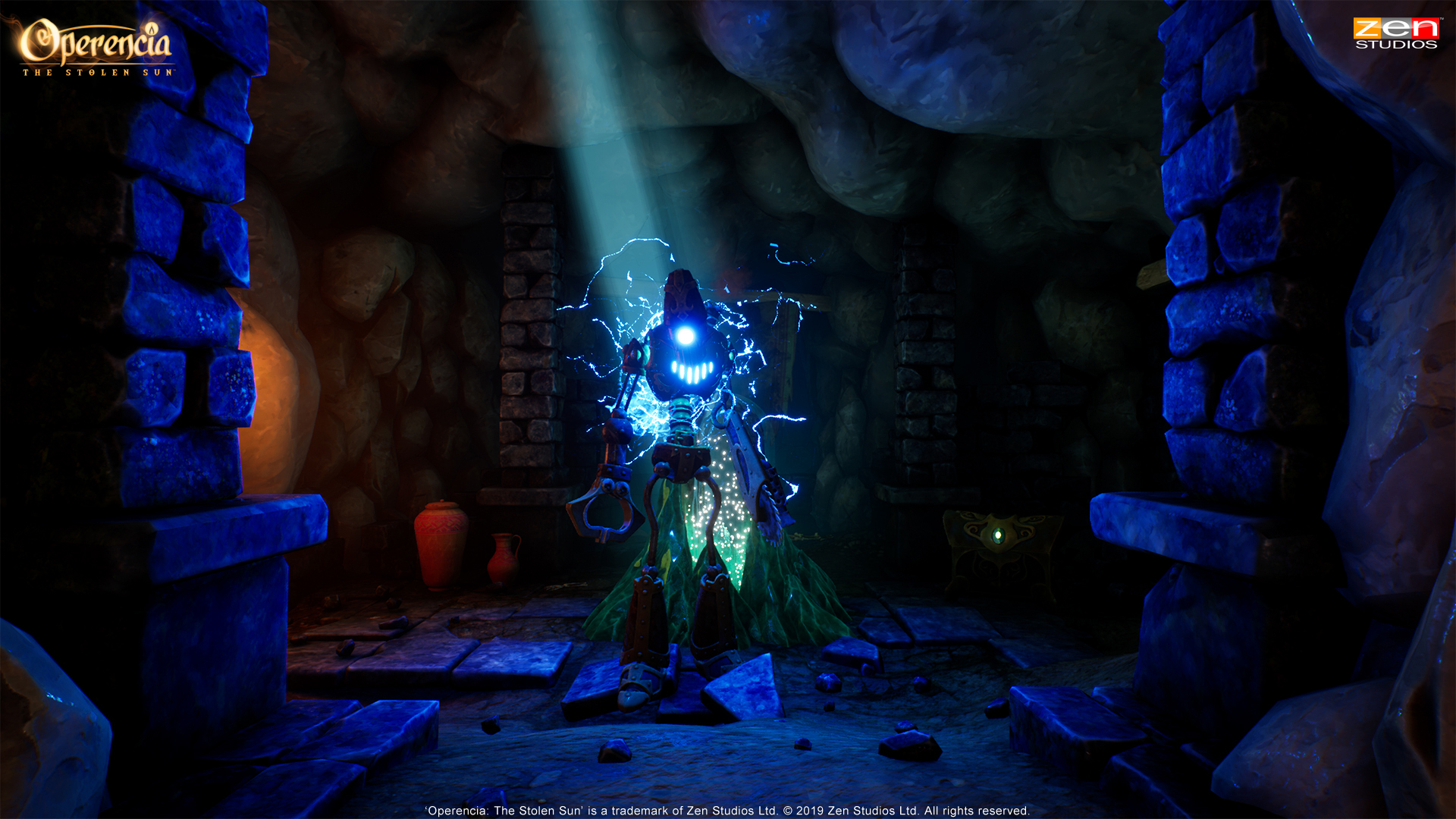 Speaking of combat, there is a bit of tactical play here at least, if not on the map. Enemies hunker down in one of three locations; front row, middle of the field, and far away, with specific abilities and weapons doing more or less damage depending on where the enemy sits. This is all fine and dandy, but then I realized my team doesn’t do this, meaning a pack of toads are more strategic than my party. Had we been given the ability to also formulate a formation, combat would’ve felt a little deeper.

Some abilities are pulled from your typical RPG; others are a bit more unique. The rogue abilities especially. You have your usual hide skill, which makes your next backstab pack an extra punch. Then you have some of which harm the player if you’re unlucky. This helps break up the monotony of your standard spellbook, but because I’m a chicken and don’t like playing the odds, usually choosing abilities with a guaranteed outcome. Some abilities have an inherent element, and if your party uses enough of that same element over and over, a devastating party skill becomes available.

Upon leveling up, you can spend points on skills and stats to beef up your character, allowing them to use new gear and abilities. There is a depth provided to the player in tailoring each character exactly as you would like them that goes beyond merely picking your class. They feel as if they have various subclasses based off of what stats you decide to focus on. Sure, you chose to be a warrior, but do you want high defense or hight attack power? These aren’t given branches, but paths you must lay out for yourself based on the attributes, items, and skills you deck them out with. By the end of the game, I had a complementary, tailor-made party that felt enjoyable to watch as they overcame groups of enemies.

My biggest issue about this game is how divided it feels with itself. Graphics are amazing; visual effects are boring. You have great music, but bad sound effects. Some characters have exceptional voice acting, while others are down-right terrible, and the same can be said for their lines. It’s almost as if there were two developers, they split all the work down the middle, each having a different idea of what they wanted the game to be, but only one of them knew what they were doing. The bulk of the game being great, but I don’t remember if I mentioned how out of place the tutorial level was. The crafting system is another oddity that just didn’t fit, other than it’s a puzzle-like guessing game. You’re given clues and must guess the right order of ingredients to use, but you never actually go out and find those ingredients. You just sort of have them already on hand. Thankfully, you only have to do this once per each new recipe found.

Operencia is only as long as you make it. Depending on the difficulty setting, how much work you put into exploring every nook and cranny to find all of the secrets, or how quickly you can overcome the games admittedly difficult puzzles. If you were to go back and replay the game, zipping through the puzzles, skipping the dialogue, you’re looking at only a handful of hours. Spend your time enjoying what the game has to offer, and you’ll get your money’s worth. Overall I enjoyed this game a lot, and if you’re playing on X-Box and have Game Pass, you already own it, so what’s to lose?

I give Operencia: The Stolen Sun 8 Murderous Fungi out of 10. For its price, it’s well worth it.