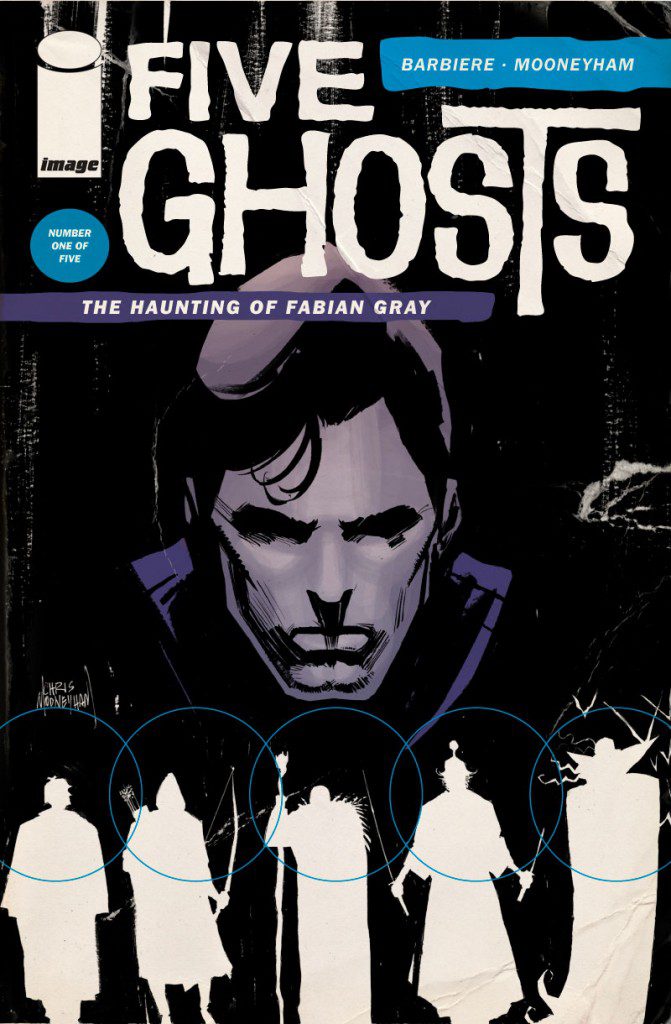 Once in a while, a comic comes out that just blows you away. It happened almost a year ago with the now classic Saga #1, it happened with The Strange Talent of Luther Strode, and now, for 2013, it has happened with Five Ghosts: The Haunting of Fabian Gray.

Written by Frank J.Barbiere (The White Suits, Divine Intervention) and with art by Chris Mooneyham, Five Ghosts is a shot of nostalgia pulp, just the way we like it. Fabian Gray is a treasure hunter, who’s character is like a mash up of Han Solo, Nathan Drake and Indiana Jones, which is a pretty awesome combination. After encountering a strange artifact, the charismatic ladies man is possessed by five literary ghosts of familiar archetypes: the Wizard, the Archer, the Detective, the Samurai, and the Vampire. Yeah, a vampire, which is an amazing visual to behold. With these ghosts possessing him, it allows Gray to utilize the skills set of each, allowing for an almost unstoppable man. But for how long can this continue on?

Barbiere has created a masterful start for the limited series, with a pace that throws us right in to the thick of things. There is no waiting until issue two to see how these haunted spirits are used by Gray, as he shows off right from the get go. Mooneyham, who is someone I haven’t heard of until this series, really sets the mood for the story, creating an exotic, adventurous visual landscape that really drives home the pulp of the book. His angular, dark style fits perfectly, and with the way the first issue ends, it looks like we will see more imaginative creatures with the coming issues.

Like I said, it is not every day a book like this comes out. However, with the string of hits Image Comics has had in the past few years, it shouldn’t be surprising. This massive first issue sets the tone for the series, as well as sets high expectations for the rest of the issues. Five Ghosts is something different, something you can’t find on the shelves right now, and that in itself is something that should be praised. It’s a clever idea that is executed with immense talent and dedication, and it shows in every single panel. Pick this book up, I can’t see how you would be disappointed in it if you love comics. Highly recommended, I give Five Ghosts-The Haunting of Fabian Gray #1 a perfect @@@@@ out of FIVE. Yes, it is THAT good.

A KING’S VENGEANCE Is A Steampunk Revenge Story

We have officially kicked off our toy drive for ou

Join us this Tuesday for our Thankful episode of t

20 Reasons Why You Should Lock Your Windows At Nig