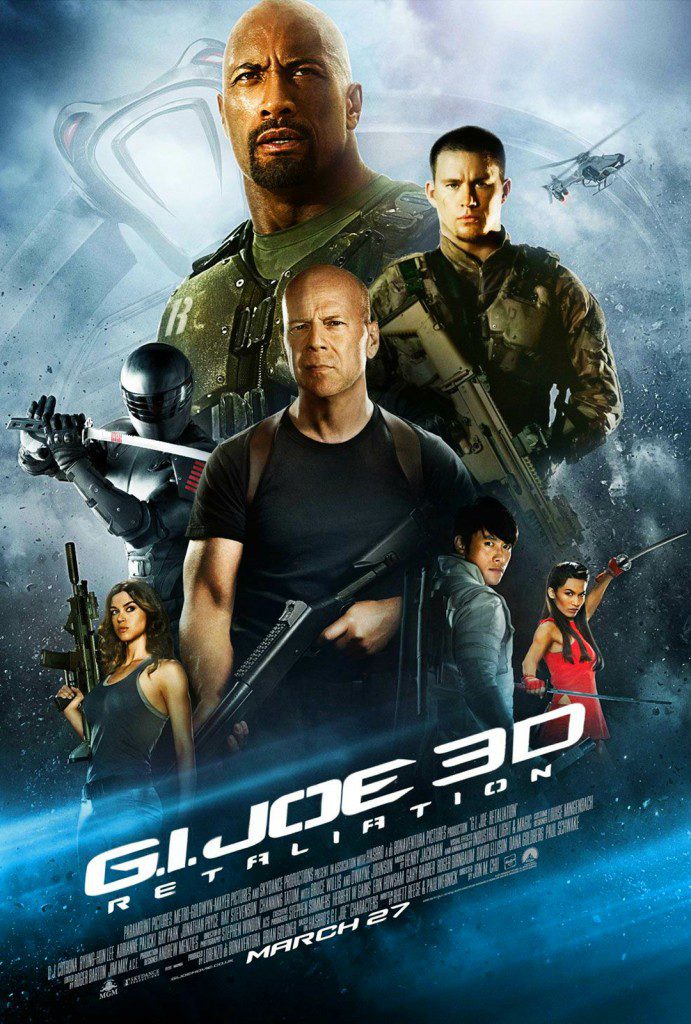 (Hesperia) In 2009, a childhood property came steamrolling onto the movie scene, and many of us had high hopes for the return of G.I. Joe. Unfortunately, the film had only a few bright spots, not enough to redeem what many saw as a train wreck. A sequel was green lit, G.I. Joe- Retaliation, at it was all set to be released in 2012. Around a month before it was scheduled to hit, the studios pushed it back a whole year in order to convert it to 3-D. It was a move that many questioned, and now we are able to see if it was worth the wait.

Directed by Jon M. Chu (Step Up 2), the film aims to revive an almost lost franchise. Only three characters returned from the original film: Duke (Channing Tatum), Storm Shadow (Byung-Hun-Lee) and Snake Eyes (Ray Park). A new cast of characters was brought on board, led by Roadblock (Dwayne Johnson) and includes the upstart Flint (D.J. Cotrona), Lady Jaye (Adrianne Palicki) and the old vet Joe (Bruce Willis). The villain from the first film is back, but it’s a totally different take on Cobra Commander (Luke Bracey), and his army includes saboteur Firefly (Ray Stevenson), and the shape shifting Zartan (Arnold Vosloo).

The film, for me anyway, did exactly what it set out to do: it saved the franchise. Dwayne Johnson, better known as The Rock, has done it again. He saved the Fast and Furious franchise, and he brought back G.I. Joe from the brink of death. He is this era’s Arnold, this era’s Stallone, and this movie shows it.  Bruce Willis as the original G.I. Joe was a very welcome addition, as the man adds a great depth to the team, being the old warhorse who has done it all. Another changed aspect of the movie is having villains that felt like an actual threat. Besides Storm Shadow from the first film, the villains didn’t seem like much of a problem. Stevenson’s Firefly is a physical threat, one that can literally go one on one with the Great One (The Rock, for non-WWE fans).

Anyone who lost faith in the franchise due to the first film should rejoice. This is the film you have been hoping for, and hopefully this film has set the bar for what’s next to come.