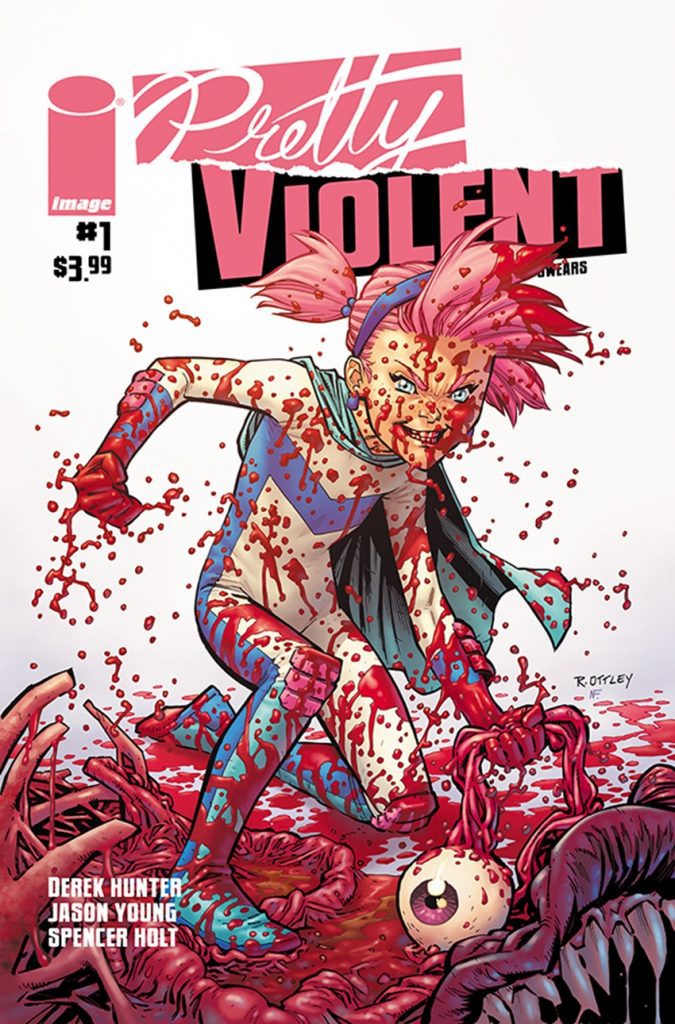 Gamma Rae desperately wants to be a superhero. She’s been super powered since birth, so why not? She was blessed with super strength, so why shouldn’t she put that to good use? Well, one reason is because she comes from a family of super villains, super violent ones at that. This is the basic premise of “Pretty Violent”, and it comes packaged with lots of swears.

The book starts with young Gamma Rae, a “superhero” who is fighting crime and is attempting to take down the bad guy. But, it isn’t the bad guy. It’s the good guy. Oopps!! This sets in motion a series of events that make it clear the world doesn’t need, or want, a hero like Gamma Rae. But she is determined to make a name for herself, even if it means taking down the city’s superheroes (on accident… mostly) in the process.

If this all sounds a bit ridiculous and crazy, it’s because it is. And it’s wonderful. This book is violent, bloody and full of bad words. It’s twisted and dark, but it’s all wrapped in a bright and colorful package.

Writer Jason Young and artist Derek Hunter have created something that is one of a kind. It’s not everyday you come across a book that harkens back to our childhoods visually, but narratively, it’s as mature as we are now. The story takes place in a candy-coated world full of beautiful visuals and cartoony characters. It’s the last place you would expect, but it works incredibly well.

Setting aside, the characters are extremely fun. Gamma Rae is a frustrated teenage girl who is trying her hardest to get out of her family’s diabolical shadow. She is trying to do something different, out of the norm, but is met with constant obstacles. But even with that, she is determined to make it work. It’s kind of a metaphor for life in that way, just keep going. We don’t get to meet much of her family here, but we do get a good glimpse at their life and how villainous they are. The superheroes in this world are  interesting too, even though we don’t get to spend much time with them (they aren’t around for very long).

This book is one of the most fun books to come out this year. It has the look of a show you would find on Cartoon Network, and it has the whimsy and humor you would also find on those shows. But, the creative team has taken that to a whole new level to create something truly unique and different. Don’t be mistaken, this book is not for kids. It’s an adult book that plays on our memories of watching Saturday morning cartoons, and that is never a bad thing. Definitely check it out.