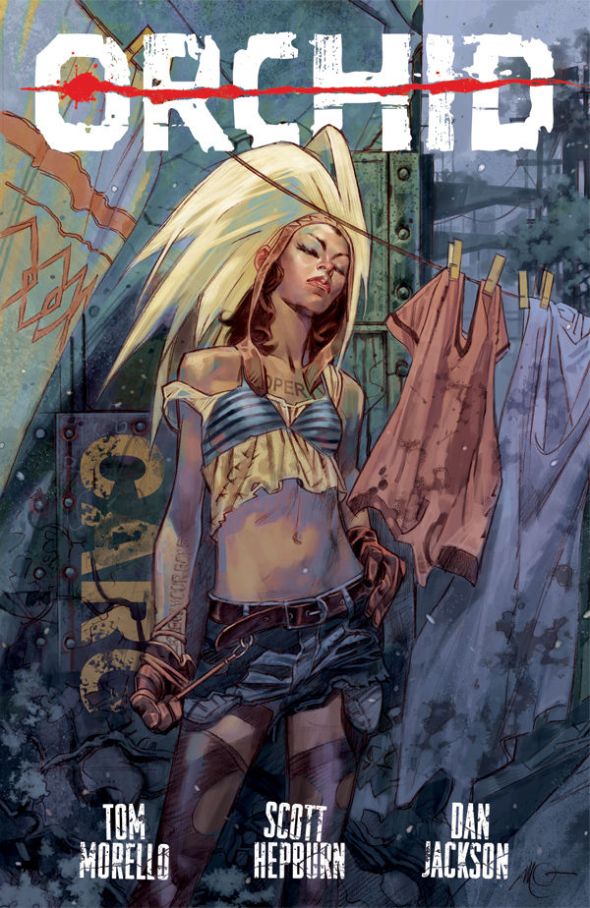 Rock stars writing comic books: it sounds like a recipe for disaster, right? I mean, what kind of story could a rock star really write? Will it be about guitars and the good life? Well, when you look at the comic books written by rockers in the recent memory, they have actually been excellent books. Pete Wentz of Fall Out Boy wrote a series for Image Comics, and it was actually a good read. My Chemical Romance lead singer Gerard Way created Umbrella Academy for Dark Horse, which is an imaginative masterpiece. So, now Rage Against the Machine’s Tom Morello is trying his hand at it with Orchid; question is, does it crash or burn?

Story: The world of Orchid is a dark, depressing, apocalyptic future, where the tides continued to rise and the world fell into chaos. Genetic codes smashed, creating new, horrifying creatures across the lands. The rich took the high ground, the technology, and left the lower class to fend for itself. Not the typical setting you would expect from a rock star, right? Well, Orchid is not your typical story.

Orchid, the namesake of the book, is a young lady who is a part of that lower class, who tries to defend her family at all cost. Orchid and her brother end up on a journey with Simon, an oddly smart man, in their quest for freedom and even possibly a rebellion. Simon possesses a mask that belongs to a freedom fighter, a mask said to grant amazing powers to the wearer, if the wearer is worthy. These elements, coupled with the amazing beasts of the land and the lush history, make for an engaging read that pulls the reader in to this mature read. That is worth repeating: this book is intended for a mature audience, as this book surely earns its Ages 14+ rating.

Art: Scott Hepburn crafts the artwork for the book, bringing to life this vividly scary world. Hepburn has worked for Dark Horse before on a few Star Wars titles, but Orchid looks to be his breakthrough book. The art is crisp and clean, the monsters are terrifying beyond most imaginations, and the characters really do take on a life of their own. Hepburn is the perfect match for this first volume, which will no doubt be the start of a modern day epic.

Overall: Morello brings the world a new take on the post apocalyptic genre, and does so masterfully. On top of that, when you purchase this collection, you have access to download four musical scores for Orchid by Morello himself. Dark Horse has another original, sure fire hit on its hands, and if you are in to a great, mature story of survival, then you owe it to yourself to read Orchid. Highly Recommended, I give Orchid Volume 1 a perfect ***** out of 5.