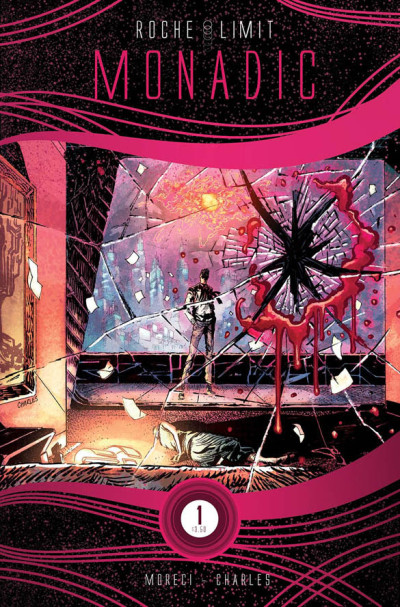 Previously in ROCHE LIMIT, the Roche Limit colony, and consequently most of Earth itself, crumbled under the onslaught of the insidious Black Sun.

Following the fan-and-critic-favorite CLANDESTINY, ROCHE LIMIT: MONADIC #1 kicks off the final chapter in the ROCHE LIMIT trilogy. Earth is in ruins after the Black Sun’s annihilation of the planet. Now, in the last remaining human city, its inhabitants fight for survival while a chosen few realize that their world may not be what it seems.

“After what’s still, to me, a surprising amount of success, the Roche Limit story is coming to an end—the end I’ve always envisioned, and I can’t wait to take readers there,” said Moreci. “This volume, Monadic, will continue to push the story deep into cerebral sci-fi and deliver the kind of suspenseful and existential story Roche Limit is known for. I can’t wait for it to start, but I’m dreading seeing it end!”

“To go from being a fan, to drawing these last two volumes, is about as weird and odd as the world of Roche Limit, itself,” said Charles. “Our creative team is sad to see the series draw to a conclusion but we’re making sure it’s going to kick butt for the fans of Roche, new and old.”