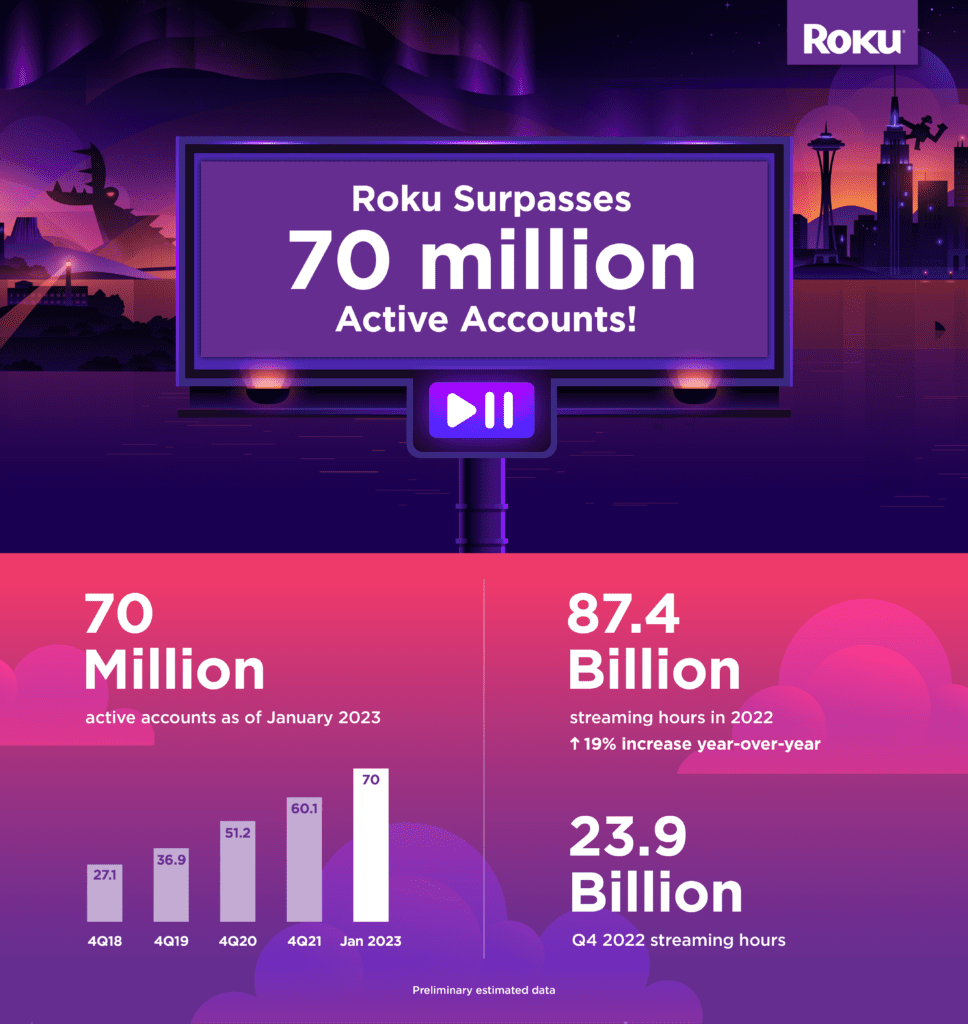 Roku, Inc. (NASDAQ: ROKU) announced that the number of global active accounts now exceeds 70 million. Active accounts as of Q4 2021 was 60.1 million. Globally, streaming hours were 23.9 billion in Q4 and 87.4 billion for full year 2022, a 19% increase year-over-year. Roku remains the #1 TV streaming platform in the U.S., Canada, and Mexico based on hours streamed (Dec 2022, Hypothesis Group).

“As consumers continue the shift to TV streaming, we’re excited that a growing number of people are taking the journey with Roku, and we’re proud to reach this meaningful milestone today,” said Roku Founder and CEO Anthony Wood. “Roku is laser-focused on delivering affordable, easy-to-use products and an operating system that makes streaming accessible to all. We look forward to continuing to bring innovative and delightful experiences to more and more viewers this year.”

In 2022, time spent streaming surpassed cable for the first time, according to Nielsen. And eMarketer predicts in 2023 less than half of U.S. households are expected to have legacy pay TV, providing an opportunity for greater streaming adoption.

Roku’s active account milestone was reached as the company announced its first-ever Roku-branded TV on Jan. 4. The launch of Roku Select and Roku Plus Series TVs are the first ever to be both designed and made by Roku, underlining the company’s commitment to delivering a best-in-class streaming experience at an accessible price. Roku Select and Plus Series TVs will be available in the U.S. in spring 2023.

Additionally, The Roku Channel — a top 5 channel by both active account reach and streaming hour engagement in the first three quarters of 2022 — expanded with many new content offerings. Over the last year, The Roku Channel premiered its first original movie, “Weird: The Al Yankovic Story,” and added Roku Originals like “The Great American Baking Show,” “Martha Gardens,” and “Emeril Cooks,” and exclusive content like “The Rich Eisen Show.” Roku also partnered with Paramount+, Lionsgate, AMC Networks, and discovery+ to bring more offerings to viewers, and will continue in 2023 with new programming, including the Miss Universe pageant, set to stream on The Roku Channel on Jan. 14.

The number of active accounts and streaming hours is based on preliminary estimated data. The company will report final operating metrics and financial results for the fourth quarter and the full year of 2022 in February.

For more information on Roku and The Roku Channel, please visit www.roku.com.