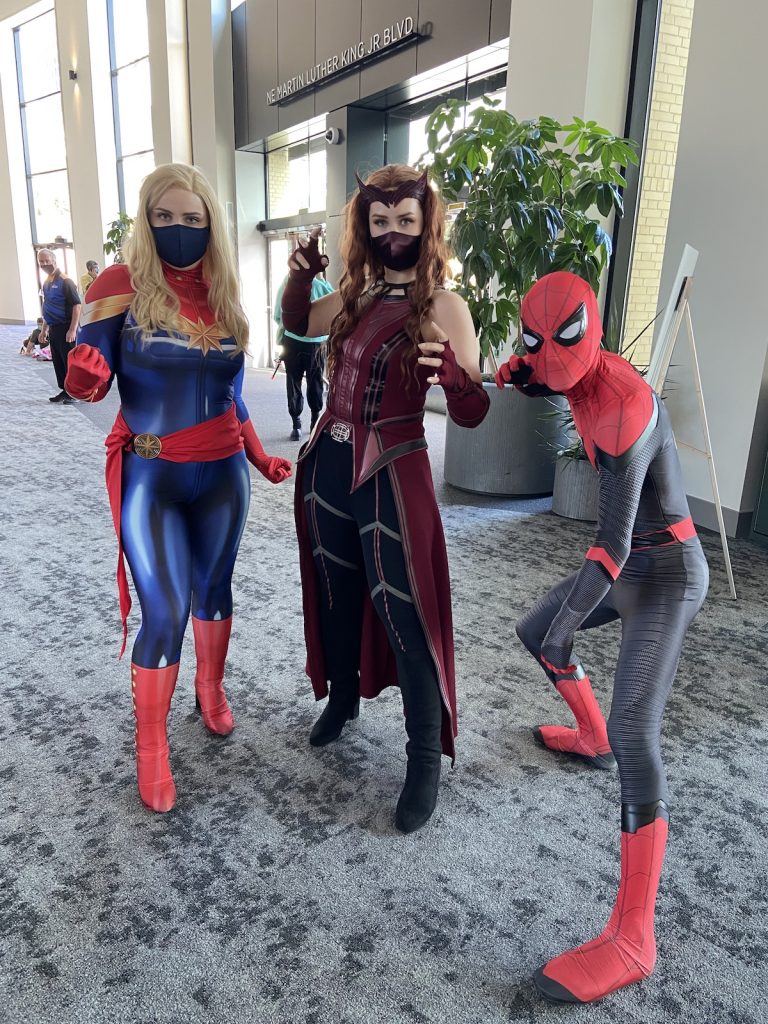 It was interesting walking through the doors of the Oregon Convention Center this year for Rose City Comic Con 2021. The last time I stepped foot into the building was earlier this year when my wife and I received our Covid vaccines, and the vibe couldn’t have been more different. As we walked through the halls to receive our shots, we were reminiscing of years past attending RCCC and how much we couldn’t wait to be back there surrounded by other like-minded people. The con was cancelled the year before due to health concerns revolving around the Coronavirus (a smart move!), and we were hoping the same thing wouldn’t happen in 2021.

As the date got closer, we were relieved to hear that the show would go on this year, focusing on keeping it as safe and healthy as possible. Proof of vaccination or negative Covid test would be required, as well as masks not being optional while in the con. As I approached the Convention Center (mask on), I was a bit iffy about how all of it would be enforced, but as soon as I walked through the doors, any hesitation I had gone out the window.

The first thing that happened was showing my proof of vaccination or negative Covid test. After they looked at my card, they placed an orange wristband on my wrist to signify that I was vaccinated. Security and everyone around me also had masks on, and upon my descent into the main floor, I noticed the sea of masks before me. As it is becoming more and more common, the ticket counter had a plexiglass barrier between you and the volunteers giving out the tickets, and it was seamless. Now, it was time for the main event.

Going into the exhibition hall was both an exhilarating and nostalgic feeling. After two years of no local cons to go to, there was an odd sense of freedom that swept over me. The anxiety that consumed me before getting there was gone, and I was finally able to let my mental guard down and be around people just like me. The odds are that these people were also struggling with the same fears put forth by the past year, but there was a sense of unity like we were all going to beat this thing together. It felt like the ultimate nerd-out moment, that moment when the heroes band together to slay the dragon while looking out for each other along the way.

Just like years past, there was no shortage of things to do and see at RCCC 2021. Although there were noticeably fewer activities to do, it still made for a fun time. The kid’s section of the con, Rose City, Jr, was missing its rock wall and character meet and greets. They made up for it by having the usual cosplay contest as well as a parade so that the kids could show off their outfits in grand style. There was also some great entertainment on that stage, consisting of a Star Wars Parody Mix put on by Torchsong Entertainment, some Mad Science, and even a Choose Your Own Adventure storytime.

There was no shortage of writers, artists, and publishers on the main floor to visit and explore their offerings. Writers such as David Pepose (Spencer & Locke, The O.Z.), Stephanie Phillips (A Man Among Ye, Rick And Morty), Frank Gogol (Dead End Kids), and many more were on hand to promote, sign and talk about their books. Fantastic artwork was on display as well from comic and non-comic artists alike. People like Aaron Lopresti (Planet Hulk, Wonder Woman) and Agnes Garbowaska (My Little Pony, DC Super Hero Girls) were at the show to meet fans and sign some incredible prints of their work.

A couple of the standout artists that weren’t associated with comic books were the Drea D Illustrations (https://www.etsy.com/shop/DreaDIllustrations) and the Matsumoto Art (https://www.matsumotoart.com) booths. Drea D is an artist based in Portland who draws strange and unusual Disney-inspired pieces that will stick with you forever. Matsumoto art is a studio based in Southern California that makes beautiful renditions of characters such as Lara Croft, Marty McFly, and Ang from Avatar The Last Airbender. Both of these places deserve your attention; make sure to check out the links.

A great mixture of big-name publishers and smaller, more indie studios set up shop this year. Portland-based Oni Press (Scott Pilgrim Vs. The World) was there, along with publishers such as Mad Cave and Birds Eye Comics. It was great looking at their offerings and discovering new titles that weren’t on my radar before.

There were also panels, photo ops, and autograph sessions with some of the most iconic celebrities around. Jack Quaid, Anthony Starr, and Karen Fukuhara did a panel in the main room to talk about The Boys. George Takai, Christina Ricci, John Heder, Adam Savage, and Carl Weathers were other stars to host panels and meet their fans. There was a panel that everyone could enjoy, and each one offered something different and incredible.

It wouldn’t be a Comic-Con without the cosplay, and there was plenty of it as far as the eye can see. Everything from My Hero Academia and Adventure Time to Resident Evil and WandaVision, there was representation for every fandom. As many of you already know, some of these outfits take months of preparation, and I’m always impressed with how perfect some of them are. This year, all of the cosplayers incorporated the mandated masks into their outfits, and they were incredibly creative.

Rose City Comic Con 2021 was a massive success. It was the grand return to the con scene for many after a crazy year and a half. I’m sure I’m not alone when I say it was a fantastic feeling being back, and I can’t wait to see what’s in store for the show next year.