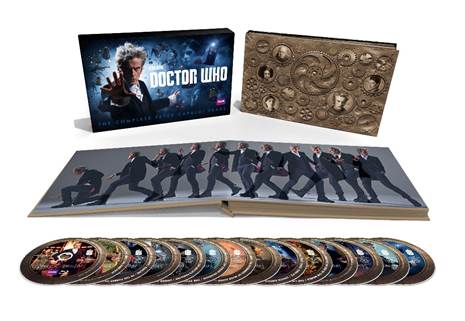 On February 13, 2018 celebrate the end of an era as BBC Home Entertainment releases Doctor Who: Twice Upon a Time, the highly anticipated 2017 Christmas special, on Blu-ray and DVD, and Doctor Who: The Complete Peter Capaldi Years on Blu-ray, featuring never-before-seen bonus content.

DOCTOR WHO: TWICE UPON A TIME

Twice Upon A Time – the final episode of Peter Capaldi’s tenure as the Time Lord, which found record-setting success with its Christmas Day airing on BBC AMERICA – sees the Doctor come face to face with…the Doctor! The epic conclusion to the Twelfth Doctor era features the return of Pearl Mackie as well as special guests Mark Gatiss (Sherlock) and David Bradley (Game of Thrones, the Harry Potter movies), and culminates in a historic regeneration that introduces the Thirteenth Doctor, played by Jodie Whittaker (Broadchurch). Newcomers have the perfect opportunity to catch the new Doctor’s adventures from the very start, while fans of the Classic series will be delighted by the return of the First Doctor (Bradley, who previously played the very first actor to take on the role of the iconic Time Lord in 2013’s An Adventure in Space and Time). Bonus content on this Blu-ray and DVD release includes Doctor Who Extra.

The Complete Peter Capaldi Years includes all three Twelfth Doctor seasons plus Peter Capaldi’s very first appearance in Doctor Who – years before he took over the iconic role – as Caecilius in the Tenth Doctor episode The Fires of Pompeii. Chock full of extras – with all of the bonus materials from seasons eight, nine, and ten, plus a new disc full of additional content, including never-before-seen deleted scenes from season eight – this Blu-ray set is a must have for any collector.

THE REAL ANIMALS OF PETER RABBIT

HEY DUGGEE: THE RESCUE BADGE AND OTHER STORIES

BBC Worldwide North America is the main commercial arm and wholly-owned subsidiary of the British Broadcasting Corporation (BBC) operating in the U.S. and Canada. The company exists to maximize the value of the BBC’s assets for the benefit of the UK license payer and invests in public service programming in return for rights. The company operates four businesses in the territory – linear and digital content sales and co-productions, consumer products, BBC.com, and two studios based in Los Angeles – BBC Worldwide Productions, responsible for the smash hit Dancing with the Stars and the limited series The Night Of; and Adjacent Productions, producers of Life Below Zero and Ladies of London, among others. The company also owns a 50.1% share in cable channel BBC AMERICA through a joint venture with AMC Networks.