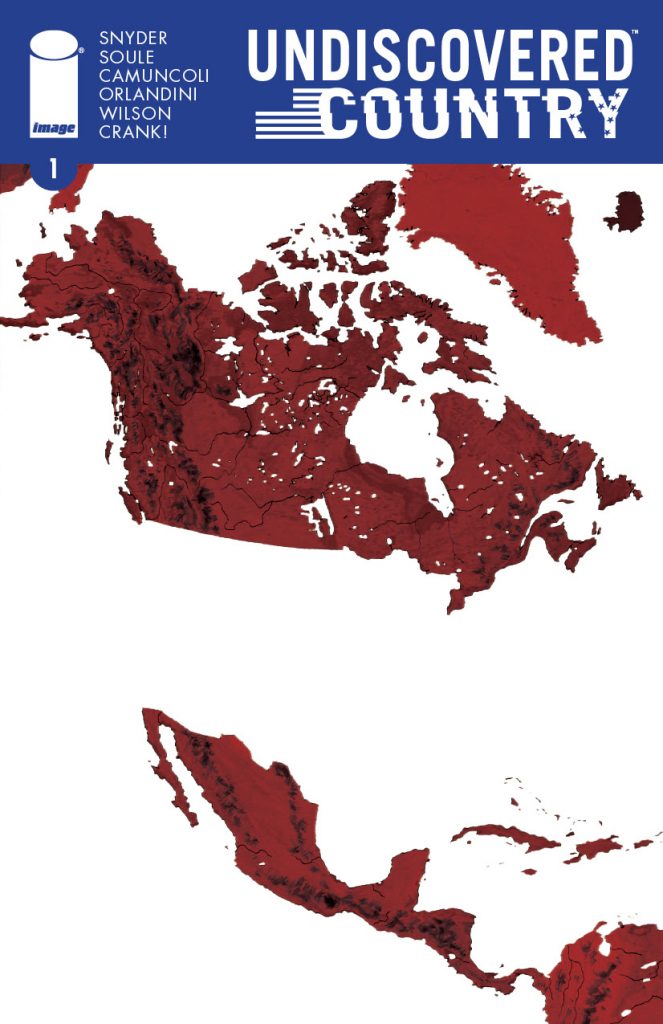 Image Comics is pleased to announce that New York Times bestselling writers Scott Snyder (Wytches, AD: After Death) and Charles Soule (Curse Words, The Oracle Year, the forthcoming novel Anyone) will team up with artist Giuseppe Camuncoli (The Amazing Spider-Man, Darth Vader, Hellblazer) for a new comic book series titled Undiscovered Country. The full color, ongoing science fiction/adventure will explore the eerie ripple effects of isolation and is set to launch from Image Comics this November 2019.

The co-writers, Snyder and Soule, took to the stage this afternoon at the Diamond Comic Distributors Retailer Luncheon to tell top tier comic shop retailers about the highly anticipated new project and shared an exclusive San Diego Comic-Con black and white ashcan edition of the Undiscovered Country #1 issue.

“As soon as Charles and I came up with this idea I knew it was special—one of those ideas that turns into big, wild, world-building story. And this series is just that: a twist-filled trek across a landscape that’s alien, mysterious, and full of adventure,” said Snyder. “It’s like Land of the Lost meets Lewis and Clark, with a team of characters we’ve already come to love as family. Speaking of teams, I’m honored and thrilled to be working with this group of creative folks. Cammo not only brings the world of Undiscovered Country to life but elevates every element—whether we’re talking the giant terrestrial fish monsters of the coast or lurking techno-zombies of the northwest… Bottom line, Undiscovered Country is a blast to work on and we’re convinced it’ll be a blast to read. Can’t wait for you guys to see it in full!”

Soule added: “I can’t believe this is my job. Working with Scott, Cammo and the rest of the team—all stars every one—is a dream on a creative level. We’ve got ourselves a hell of a high concept here, and fleshing it out together—filling our sealed-off US with beautiful, insane adventures—has been one of the great thrills of my career. It’s been wonderful to make Undiscovered Country with my friends, and I think it’ll be just as fun to read.”

In Undiscovered Country, readers will journey into an unknown region that was once the United States of America—a land that’s become shrouded in mystery and literally walled-off from the rest of the world for decades. A small expedition enters the former US in search of a cure to a humanity-ending pandemic. They travel inward and learn the secrets of what America has become; each member seeking their own form of truth in the undiscovered country.

Camuncoli said: “When two of your favorite writers, whom you’ve previously and brilliantly already worked with, ask you to team up for a new book, you get what I call a ‘no brainer’. It took me a second to say yes, I didn’t even really need to know what the story was about because I already knew it couldn’t have been less than stellar. And of course it is stellar, and then some.

“From the concept to the cast, to the world-building—everything in this book is terrific, and so is the team we have assembled to make it happen. So, enter my Darth Vader partner in crime Daniele Orlandini, the maestro of nuances Matt Wilson and the super letterer Crank! and then you end up feeling like playing in a superband, like Temple Of The Dog, or Them Crooked Vultures. These guys really make me feel like it’s easy to tell a story that is larger than life, and if it’s like that it’s also because, guiding us all from above, editor supreme Will Dennis never misses! Will hired me for my first Hellblazer story, back in 2001, and it feels fantastic to have him on my side again after all these years.

“So, long story short, we’re all giving Undiscovered Country our all, and we hope it’ll show. Please check it out and let us know how you like it, because we sure as hell do, and there’s nothing better than doing the comics that you like!”