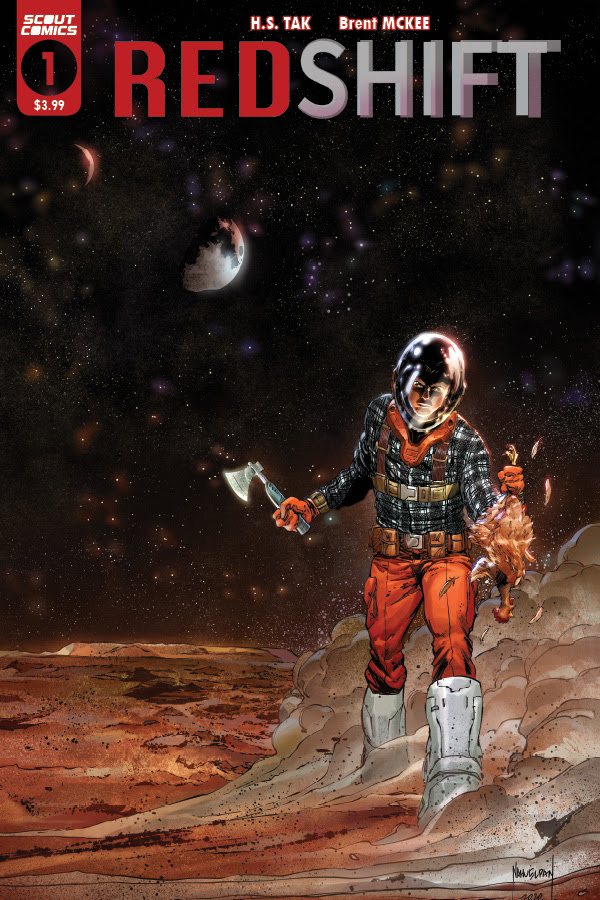 Scout Comics takes the tagline “Lost in Space” to all new levels with REDSHIFT.

In this science fiction inspired comic where the human race sits on the precipice of total extinction, our protagonist HELLENER DRAKE, is reluctantly recruited on a mission by the same organisation responsible for his own mother’s death.

Out now from award winning filmmaker HS Tak (IDW’s BOY-1) and artist Brent David McKee (Image/Dark Horse/IDW), REDSHIFT is an inspired and worthy evolution to Science Fiction epics which spend less time with Aliens and more time questioning what if the Human race faced extinction in the next 100 years? The result in this first issue is a brilliantly flawless science fiction drama where the biggest danger lies in the arrogance of man and in the cold void of space.

REDSHIFT is survivalism in space and HELLENER DRAKE will do anything he can to ensure the human race lives on. Even at the cost of his own morality.

Writer/Filmmaker HS Tak had the following to say about REDSHIFT’S upcoming release:

“I remember being out in a field in the summer and looking up at the stars. Getting hit with the wonder of what’s out there. That simple kid’s question is what launched REDSHIFT. It’s a story about explorers, pioneers, pilgrims, and colonization. What it would take to cross into a distant solar system and what you might find.”

“Getting to work on Redshift with Himkar and Sebastian has been my best experience as a professional comic book artist. Himkar is incredible to collaborate with on anything from storytelling to costume/spacecraft designs, on top of being an amazing writer. And colorist Sebastian Cheng, well, makes me look better than I am.”

McKee’s celebration of colorist Sebastian Cheng is no joke as the stunning palette of a barren landscape against the spectacle of space elevates REDSHIFT to new visual heights. Which is no surprise given Cheng’s credentials of Shang-Chi, Transformers, Call of Duty, Dungeons and Dragons, The X-Files, World of Warcraft, Star Trek, and Orphan Black, to name a few.

REDSHIFT is the type of space astronaut adventure which will challenge every fibre of your being. Both as a reader and as a soon to be converted new fan.