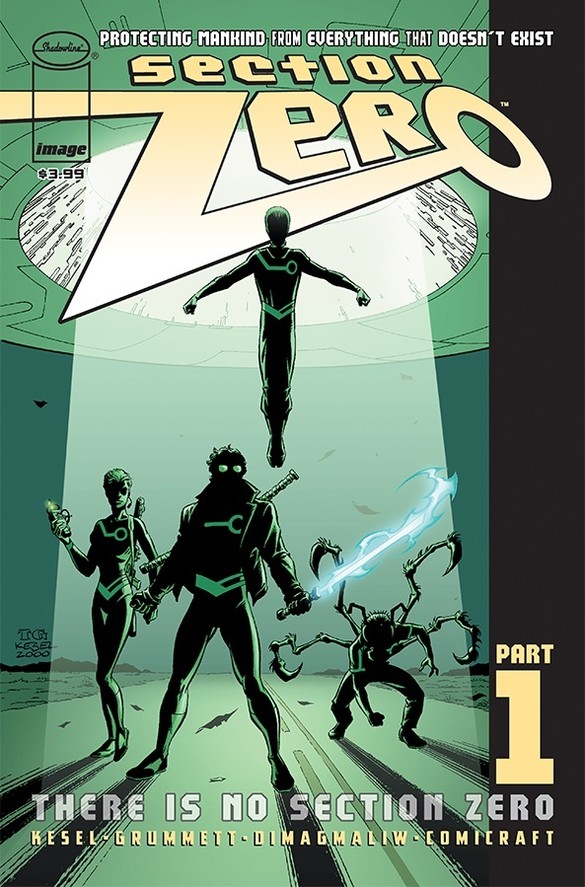 Big Foot, The Loch Ness Monster, UFO’s, whether you believe these phenomena are real or not, what if the government really was hiding the reality of their existence. Karl Kesel and Tom Grummett have created a universe where they those creatures and many more are tamed and tested by the special force team, Section Zero. This team is a charter of the United Nations, and their primary objective is to investigate appearances and disappearances of the supernatural. And most importantly they must do this in the shadows because technically there is no “Section Zero.”

We meet the task force in the middle of a war zone. Sam, a member of the task force, is looking for a bug boy that has been reported, and not only does he find him, but he’s also assaulted by the creature. Sam’s teammate Tina swoops in just before he gets his face chewed off by the beast, and they apprehend the bug boy. As they extract the target, they are caught by a military force, and the final team member named Tesla saves them by stopping the bullets from contact. As the team heads to their headquarters with the bug boy, his transformation fades, and he returns to his natural state as a boy. He then proceeds to explain how while he was living in San Francisco he got a tattoo from a random man in Chinatown. The tattoo started itching, and when he scratched, he transformed into this bug body. After the team and the boy get to the base, their commander Aj Keeler tells them to go to Australia to find a mysterious beast who has been reported to be killing livestock of local farmers. When they arrive at the location reported, they find a cave with a mysterious creature.

Ben Dimagmaliw really brought the story to life with his art, and what I appreciate most is the depth of field he created with his framing. All in all an interesting story. There wasn’t too much detail in this issue, so I’d like to see the direction they take in the next issue now that the plot has been set. As an avid fan of superhero teams, I appreciated the story, and if you are like me, I think you will too. Pick up your copy today and see what you think.