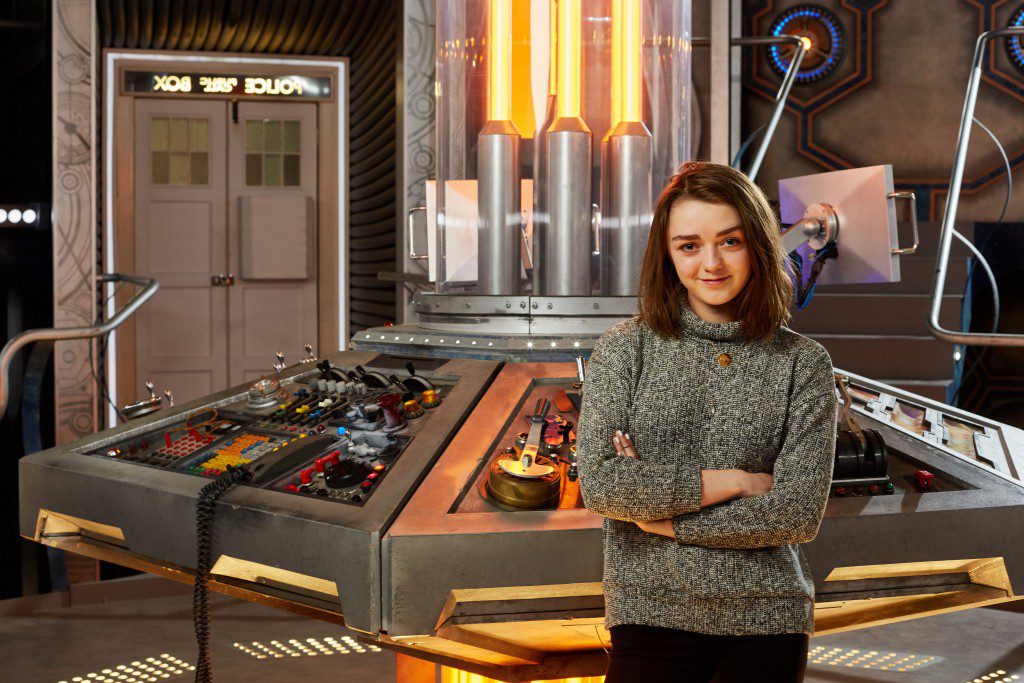 Six Possible Doctor Who Characters Maisie Williams Could Be

(Victor Valley)– The trailer for the new season of Doctor Who is here. Like all of the previous Doctor Who trailers, fans are given a glimpse of the upcoming villains and heroes without giving away any plot or spoilers. A creepy rockabilly man is shown walking down a hallway, some new metal-clad villains are seen on a grass field, and we even get a couple of glimpses of a resurrected Missy apparently in league with The Doctor and Clara.

After the show’s title card and release date are shown, we are treated to one more quick scene in which Maisie Williams (Game of Thrones) greets The Doctor as “old man” and he has a shocked/surprised look on his face.

Since this trailer dropped, fans have been wildly speculating as to who the character played by Maisie Williams is. In a recent interview, show runner Stephen Moffat has said that she is an important character, but she is not Susan Foreman (his granddaughter and first companion) or The Doctor’s daughter, who were the two front runners in most fan theories since the trailer aired.

Because Stephen Moffat has misled fans before in order to avoid spoiling important story lines, The Doctor’s daughter and granddaughter cannot be left out of the discussion. But, if she is not one of the two relatives previously mentioned, who else could she possibly be?

Rule 1, The Doctor lies. If the show is bringing back a major character, it would only be logical for the show runner to throw fans off the scent by telling them they are wrong about her true identity.

One of the major clues that point to the reappearance of the Doctor’s granddaughter, is how the character addresses the titular Time Lord. When she calls him “old man”, it could indicate that she is not only comfortable enough with him to call him that, but also that he must be much older than she is. Her reappearance would not only explain her level of comfort with him, but also the look of shock on his face when he sees her.

Rule 1, see above. It is a safe bet that just as in the case with Susan, Stephen Moffat would not spoil the surprise appearance of an important character by letting fans know who she is before the season starts. After all, he said that she is not his daughter, but did not mention Jenny by name in his statement.

Jenny is the genetic daughter of The Doctor who is created when he is forced to give a tissue sample to a progenation machine that slightly changes the DNA and creates a fully grown and educated female offspring. She is seemingly killed during the climax of the episode “The Doctor’s Daughter”, only to “revive” (similar to David Tennant’s first regeneration that healed him, but did not change his appearance), steal a space ship, and set out to explore the universe.

While her reappearance after 7 years would be a welcome sight for fans, her arrival would offer several more questions than it would answer. Can she fully regenerate? Where has she been? Why is she crossing The Doctor’s path now? That being said, it is not uncommon for Stephen Moffat to answer one question while posing 10 more. Jenny’s new look arrival would definitely fit that profile.

The revelation that the main antagonist for Peter Capaldi’s first season was a female regenerated Master (who goes by the name Missy, and is played brilliantly by Michelle Gomez) shocked and impressed fans word wide.

Like Jenny above, she is seemingly killed in the season finale “Death In Heaven” (really, how many times has The Master “died”, definitely more than Rory). Most people assumed that she was dead until it was confirmed that she would appear in the new season of the show. She is shown twice in the new trailer with The Doctor and Clara (in what appears to be a more friendly situation) before Maisie Williams makes her appearance.

Is it possible that she has regenerated again into a younger female form? Stephen Moffat did say that she would be playing an important character, and aside from the companion, who would be more important than The Master?

If The Master can overcome death time and time again, why not everyone’s favorite time-traveling archeologist?

River’s story is long and complicated, and it begins with her death. Sacrificing herself to save the people trapped in The Library, she begins a love affair with the Doctor that spreads across two incarnations and appears to end in “The Name of The Doctor”.

It is possible that the same Time Lords that granted the Doctor a new cycle or regenerations also granted River the same gift. While the Maisie version of the character does not appear to be in love with The Doctor, her reappearance as a new person (who does not care for The Doctor like Alex Kingston did), would make for an interesting and new dynamic between the two married Time Lords.

Could the Time Lords be returning one at a time? First The Master finds a way to escape the lost planet of Gallifrey, could the villainous Rani be far behind?

In the classic Who, The Rani is the Gallifreyan equivalent of a mad scientist. She uses her superior intellect and power as a Time Lord to conduct horrible experiments on entire populations of people. Having defeated her on 2 separate occasions, The Doctor would certainly be surprised to see her alive and well having escaped the Time War and the destruction/displacement of her home world.

Stephen Moffat has suggested that Gallifrey will be found in the not too distant future. If this is the case, a young and newly regenerated Rani may be the key to locating and returning the planet to its proper place in the universe.

With all of the speculation suggesting that her character is someone from The Doctor’s past, the show runners could throw the fans a complete curveball and invent a new Time Lord/Lady that has not previously been mentioned or seen (like the War Doctor).

Because the show pulled heavily from the past toward the end of Matt Smith’s run, Moffat could choose to go in a different direction and invent an unknown character (Time Lord or otherwise) that could challenge The Doctor and provide a great antagonist (or ally) for the new season.

Whether they choose to make Maisie’s character someone from the show’s past or someone who has never been seen before, it has been confirmed that she will be an important part of the storyline for the new season. Unfortunately for fans, we will only have speculation until the season premiere (“The Magician’s Apprentice”) airs on September 19.