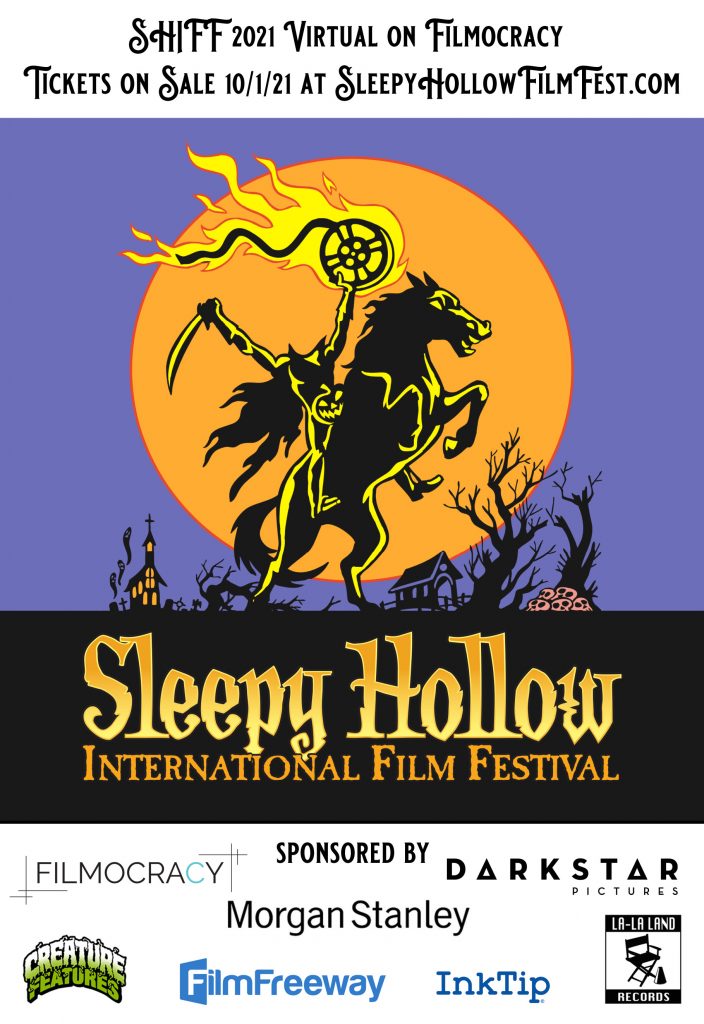 “Certain it is, the place still continues under the sway of some witching power that holds a spell over the minds of the good people, causing them to walk in continual reverie.” —WASHINGTON IRVING, “The Legend of Sleepy Hollow”

After its thrilling inaugural year in 2019, the SLEEPY HOLLOW INTERNATIONAL FILM FESTIVAL (SHIFF) returns this October 15-17, 2021, in the comfort of your very own hollow, virtually bringing you a provocative and exhilaratingly eclectic selection of noteworthy feature films and short films via Filmocracy.com !

In the creative spirit of Washington Irving’s classic tale, The Legend of Sleepy Hollow and the actual town that inspired it, Sleepy Hollow, NY, the historic cradle of the American supernatural, SHIFF endeavors to celebrate notable genre cinema that draws artistic inspiration from the past and present to usher in a new era of genre legends.

ALONE WITH YOU directed by Emily Bennett and Justin Brooks

FOR ROGER directed by Aaron Bartsuka

THE REENACTMENT directed by Andrew Ford

THEY LIVE INSIDE US directed by Michael Baliff

AXE TO THE FACE directed by Andrew Moorehead

THE GIFT directed by Jacintha Charles

THE MISADVENTURES OF ICABOD CRANE directed by Guido Jiménez-Cruz

SYNONYMOUS WITH directed by Thom Hilton

THAT HALOWEEN directed by Mike Hickey

In addition to these virtual screenings on Filmocracy, SHIFF is also hosting a HORSELESS CARRIAGE CINEMA pop-up at Kingsland Point Park in Sleepy Hollow, NY Oct 15-17, 2021. Three nights of revival big-screen, double-feature fun under the stars includes the likes of THE THING, CHOPPING MALL, ARACHNOPHOBIA and more! Tickets are available now at www.SleepyHollowFilmFest.com