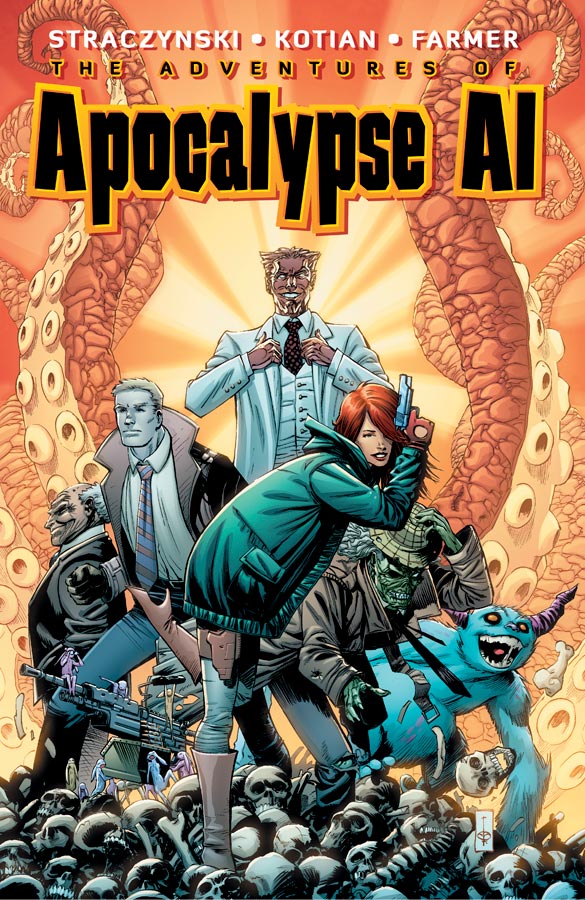 Solve the Case & Prevent the End of the World: All in a Day’s Work for Apocalypse Al

In 2013 MTV Geek announced plans to publish a new four-part miniseries entitled THE ADVENTURES OF APOCALYPSE AL, written by J. Michael Straczynski (SIDEKICK, TEN GRAND) and drawn by Sid Kotian (TWILIGHT GUARDIAN), with colors by Bill Farmer (EPOCH). The series follows the action-packed, fast-paced, surreal, and comically strange tale of Allison Carter, a private investigator whose beat is the end of the world…or more precisely, preventing same. When MTV Geek closed its doors in October, imperiling the project, Joe’s Comics and Studio JMS leapt in to reacquire the material with the assistance of MTV’s Tom Akel.

Consequently, in February 2014, THE ADVENTURES OF APOCALYPSE AL debuts from Joe’s Comics with an oversized first issue containing 30 pages of original story, unbroken by advertisements, and accompanied by an audio dramatization that has become the trademark of Joe’s Comics. All four issues—107 pages in all—are written, drawn and inked, guaranteeing that they will come out on time. In addition to the covers by Sid Kotian, covers will be provided by Francesco Francavilla and the legendary John Romita Jr. This marks the first time Romita and Straczynski have worked together since their celebrated run on The Amazing Spider-Man.

When a mysterious figure gets his hands on the Book of Keys, whose secrets can cause the destruction of the world, Allison Carter is the only one who can stop him. Her journey takes her through a world populated by zombie cops, machinegun toting imps, techno-wizards, closet trolls, demonic theme parks, other dimensions, Ultimate Darkness, and an undead ex-boyfriend.

“After doing three titles about demons, despair and death, more or less in that order, this is the first title from Joe’s Comics that’s about sheer, unadulterated fun,” said Straczynski. “It’s light-hearted and funny, its heart is in the right place, the action never stops, and it features a smart, strong hero who has a habit of saying exactly the wrong thing at exactly the right moment. If you liked Ghostbusters and Men in Black, this is the book for you.”

India-based artist Sid Kotian is a fast-rising star in the comics field, having worked on such titles as Hawken and Twilight Guardian. “His work on The Adventures of Apocalypse Al is some of his most stunning to date,” Straczynski said. “His work has a modern, fresh and fluid look, it’s just a beautiful book. We were so knocked out by his work on Al that we hired him to do the art for DREAM POLICE, a twelve-part maxiseries coming out from Joe’s Comics later in 2014.”

“Joe’s script for Apocalypse Al is a balance of noir, humor, horror and just the right amount of serious moments at the right spot,” said Kotian. “It was challenging trying to match the visuals to the soul of the story. I don’t think I’ve ever redrawn so many pages trying to do just that. I had a great time drawing it though and I’m sure the fans will love it.”

“With Apocalypse Al Joe blends a supernatural adventure story with a pulp sensibility crafted around a character who is one part Indiana Jones and one part Ellen Ripley. Allison Carter is the take charge, fast talking action heroine with a sharp tongue and nerves of steel fans have been waiting for,” said Phil Smith, Production Editor.

For information, updates and more go to www.imagecomics.com and www.studiojms.com.