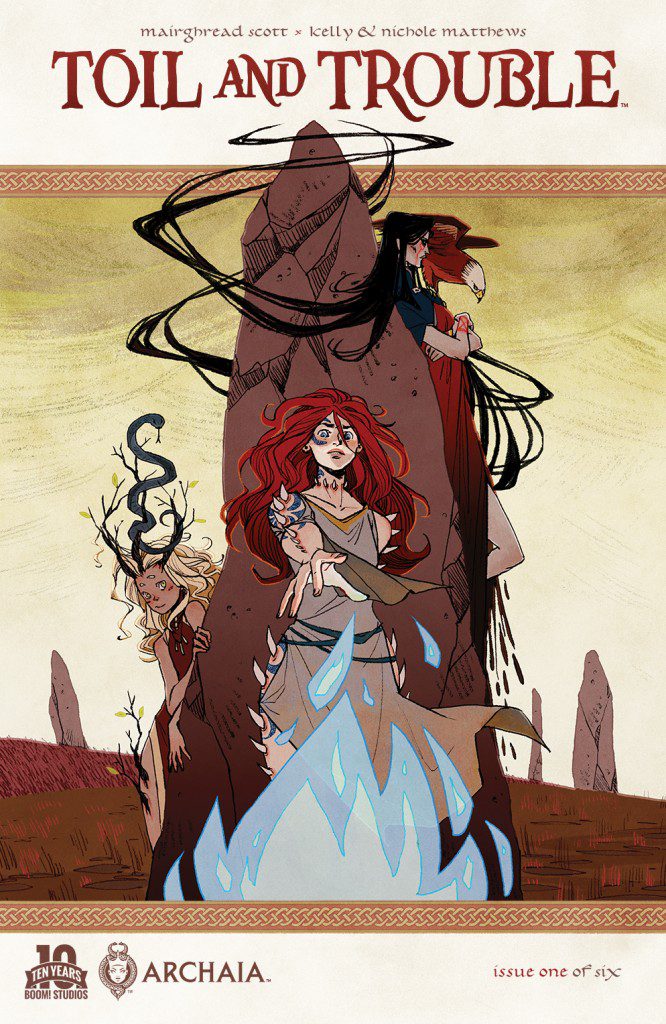 Something Wicked This Way Comes to Archaia in ‘Toil and Trouble’

Archaia, an imprint of award-winning publisher BOOM! Studios, invites readers to look behind the scenes of Shakespeare’s Macbeth to see who wields the real power in the new, original limited series Toil and Trouble. Mairghread Scott (Transformers: Windblade) and debut artists Kelly & Nichole Matthews reinvent the famous tragedy by putting the power in the hands of the three witches as they control the destiny of a king and the fate of Scotland.

“Toil and Trouble takes the coolest parts of Shakespeare’s Macbeth and flips it around to show how these three powerful witches were pulling the strings the whole time,” said BOOM! Studios Editor-in-Chief Matt Gagnon. “Mairghread has crafted a story of three incredible women whose desires will shape a country’s destiny, and Kelly and Nichole infuse that story with beautiful, lush artwork crackling with magic. I think even the Bard himself would co-sign this.”

The three Fates—Riata, Cait, and Smertae—have always been guiding and protecting Scotland unseen, indirectly controlling the line of kings according to the old religion. When there is a disagreement in the sisterhood, Riata and Smertae will use men as pawns, and Smertae will direct Macbeth to a crown he was never meant to have.

“[Toil and Trouble is] a gorgeously drawn story of a battle for ancient Scotland, that is secretly watched over by three feuding witches and their familiars,” tweeted writer Gail Simone (Red Sonja, Secret Six), who got to read an advance copy. “Absolutely one of my favorite new books. I can’t wait for the next issue, it feels like a TOP-NOTCH fantasy novel, but with adorable art.”

Toil and Trouble #1 (of 6) (formerly The Third Witch) arrives in comic shops on September 2nd with a main cover by Kyla Vanderklugt (Jim Henson’s The Storyteller: Witches) for the price of $3.99 under Diamond order code JUL151089. Also available in a limited quality is a 10 Years incentive cover by Meredith McClaren, and a retailer incentive cover by Haemi Jang (Clive Barker’s Next Testament).

The Final Order Cutoff deadline for retailers is August 10th. Not sure where to find your nearest comic retailer? Use comicshoplocator.com or findacomicshop.com to find one! Fans can print out, fill in, and bring in the order form below to their local comic shop. (Please note that most shops will require payment in advance.) It’s also available for order directly from boom-studios.com. 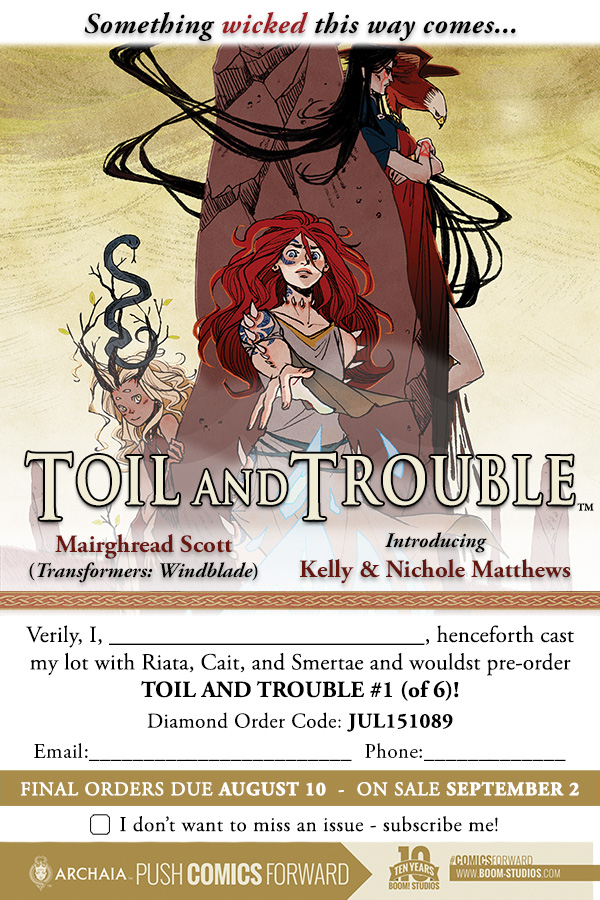