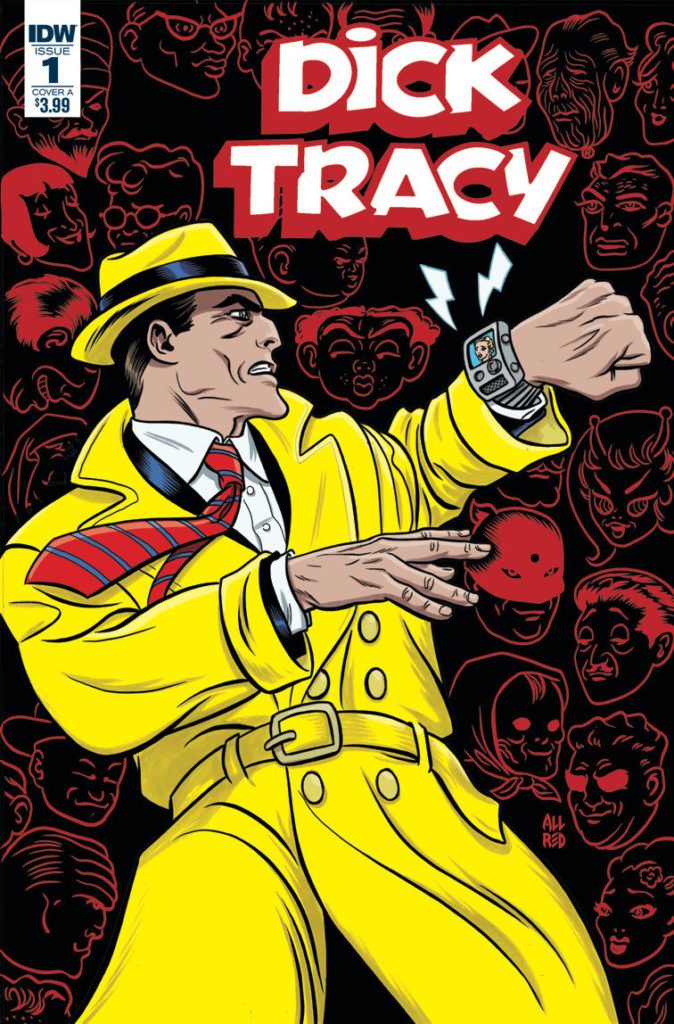 One of the most iconic comic-strip heroes of all time is back in action, courtesy of IDW Publishing’s new series, Dick Tracy: Dead or Alive! Reimagined for the 21st century through a retro lens by the superstar team of Michael Allred, Lee Allred, Rich Tommaso, and Laura Allred, the four-issue miniseries launches in September… so criminals had best beware!

In Dick Tracy: Dead or Alive, the All-American detective just made the biggest collar of his career… and it only cost him his job. Now, the honest cop has packed his bags for “the city by the lake,” and its criminal community is firmly in his sights! Featuring cover art and co-written by Eisner Award-winning superstar Michael Allred (Madman, iZombie, Silver Surfer), the new series features strange villains, crooked cops, and gunfights galore.

“Dick Tracy is an instantly recognizable old-school icon, like Mickey Mouse and Superman, but he’s been out of the spotlight awhile and due for a curtain call. We want to shake it up and show the glow in the 21st Century,” says Michael Allred. “I always get a big kick working with my first-ever collaborator and big brother, Lee Allred, as well as my favorite colorist and favorite wife, Laura. But I’m crazy excited about working with Rich Tommaso! He is one of the most innovative and thrilling cartoonists working in comics. I’m lit up with giddy shock that he’s letting me slop ink on his beautifully rendered pencils, keeping me on my toes to do the work justice on this thrilling series!”

Co-writer Lee Allred says, “Dead or Alive pits Dick Tracy, champion of Law and Order, against not only brutal crime bosses but the corrupted forces of the Law itself. Every hand, cop, and crook will be against Tracy as he battles the enemies of true justice. With Rich, Mike, and Laura as the art team, classic crime drama has never looked so good.”

“I am thrilled to try my hand at drawing this legendary, pulpy, hardboiled crime classic,” says penciller Rich Tommaso (Spy Seal, Dry County). “Along with Roy Crane, Milton Caniff, Noel Sickles, Jack Cole, and Alex Toth, Chester Gould is a cartoonist that I am perpetually inspired by when I’m working on my own crime stories. So, this is a project that I feel is well within my wheelhouse. The Dick Tracy cast of characters makes this comic so much fun to draw on a daily basis. I only hope we can all bring something great to the comic ourselves while, simultaneously keeping true to its origins. Not an easy feat to be sure, but I feel it’s damn worth a try.”

Since 1931, Chester Gould’s Dick Tracy has thrilled millions with tales of good guys versus bad guys, while showcasing the latest criminology techniques and old-fashioned values. Throughout the years, the quintessential detective had numerous partners and sent thousands of rogues either to the slammer or their graves, but there were always more bizarre, out-of-this-world villains (with funny names and hideous faces) to pursue.

For more information on purchasing copies of Dick Tracy: Dead or Alive, contact your local comic shop or visit www.comicshoplocator.com to find a store near you.