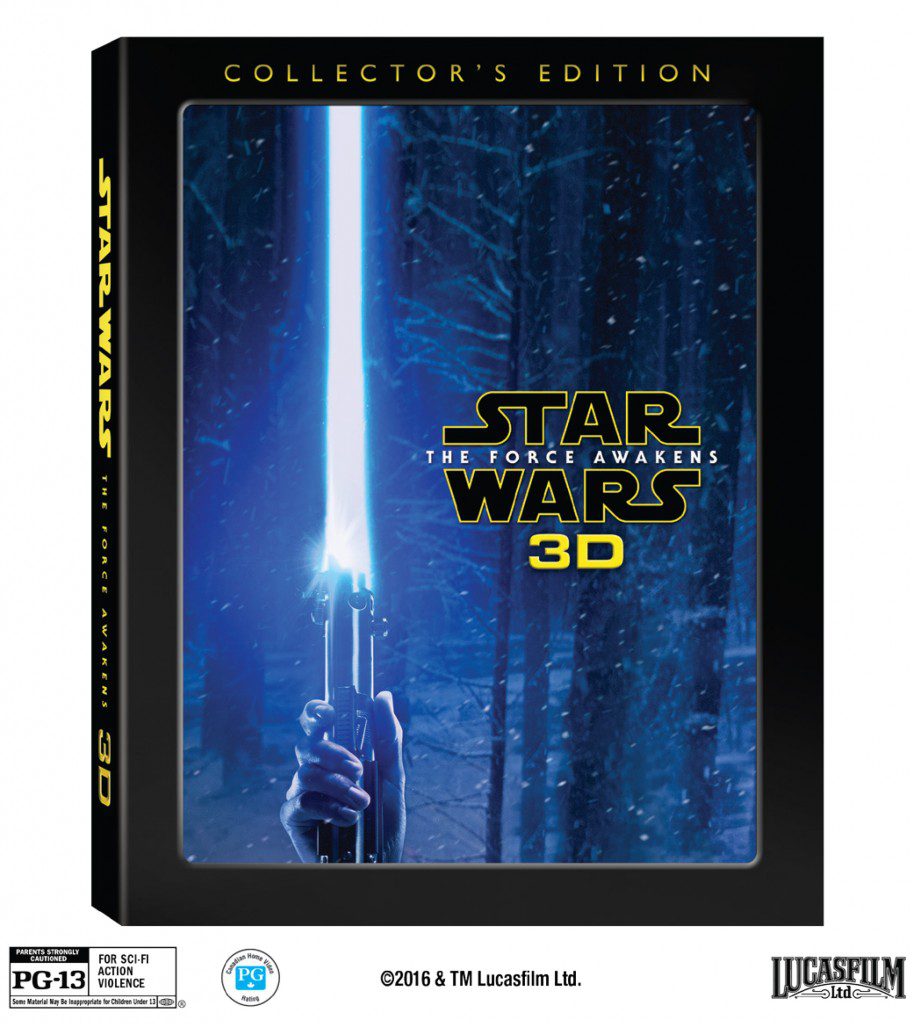 Star Wars: The Force Awakens 3D Collectors Edition – arriving in the US and Canada on Nov 15 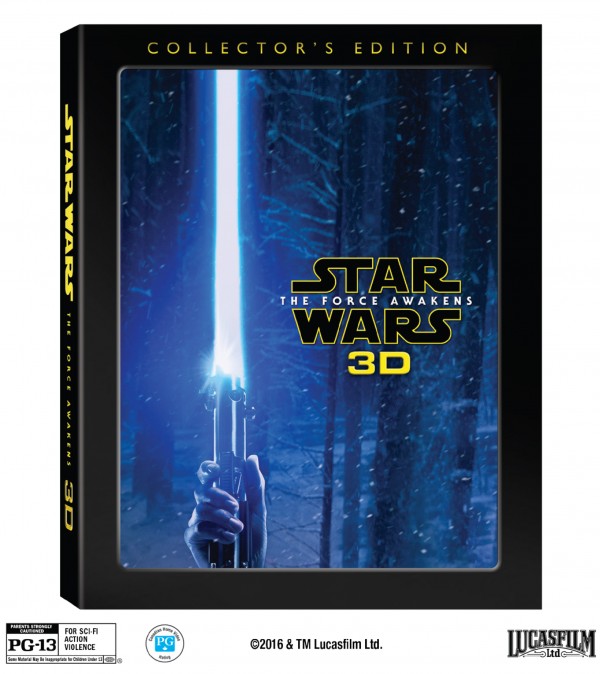 The Force is Strong with this new 3D Collectors Edition

This fall, Star Wars fans around the world, will experience a galaxy far, far away—up close and in eye-popping 3D—through the highly anticipated “Star Wars: The Force Awakens” 3D Collector’s Edition, rolling out beginning Oct. 31 and arriving in the United States and Canada on Nov 15.

Upon its debut last December, “Star Wars: The Force Awakens” received rave reviews from both critics and audiences, and shattered box office records with over $936 million domestic and $2 billion worldwide. The film has since been nominated for five Academy Awards® and took home the BAFTA Award for Special Visual Effects. “The Force Awakens” re-ignited the Star Wars franchise and fans eagerly await the next installment, arriving in theaters Dec. 2017, as well as the first in a series of standalone films, “Rogue One: A Star Wars Story,” premiering on Dec. 16, 2016.

Audio Commentary with J.J. Abrams – Enter the mind of visionary director J.J. Abrams as he reveals the creative and complex choices made while developing the first film in the new Star Wars trilogy.

Foley: A Sonic Tale – Foley artists, consisting of old pros and new talent, unite to bring the world of “Star Wars: The Force Awakens” alive through the matching of sound to action.

Sounds of the Resistance – Hear how the epic sound design of “Star Wars: The Force Awakens” moves the Star Wars legacy forward.

Dressing the Galaxy – Costume Designer Michael Kaplan reveals how the costumes of the original Star Wars movies were re-envisioned for a new generation.

The Scavenger and the Stormtrooper: A Conversation with Daisy Ridley and John Boyega – The two new stars share the thrill of working together on the adventure of a lifetime and becoming part of the Star Wars legacy.

Inside the Armory – Take a fascinating tour through the design and creation of the weaponry in “Star Wars: The Force Awakens.”

Classic Bonus Features – These offerings from the April release of “Star Wars: The Force Awakens,” include the complete story behind the making of the film, an unforgettable cast table read, insights from legendary composer John Williams and deleted scenes, as well as features that dig deeper into the creation of new characters such as BB-8, the design of the climactic lightsaber battle between Rey and Kylo Ren, the film’s remarkable digital artistry and the Star Wars: Force for Change global aid initiative.

* Digital bonus offerings may vary by retailer. New bonus content is available in the 3D Collector’s Edition package only.

Having established a musical legacy with his iconic scores for the previous six films in the Star Wars saga, acclaimed composer John Williams returned to score “Star Wars: The Force Awakens,” ultimately garnering his 50th Oscar® nomination for it.

ABOUT “STAR WARS: THE FORCE AWAKENS”:

Lucasfilm Ltd., a wholly-owned subsidiary of The Walt Disney Company, is a global leader in film, television and digital entertainment production. In addition to its motion-picture and television production, the company’s activities include visual effects and audio post-production, cutting-edge digital animation, interactive entertainment software, and the management of the global merchandising activities for its entertainment properties including the legendary STAR WARS and INDIANA JONES franchises. Lucasfilm Ltd. is headquartered in northern California.

Disney Movies Anywhere (DMA) is an engaging and family-friendly cloud-based digital movie service that makes it simple to buy your favorite Disney, Pixar, Marvel and Star Wars movies once and watch them anywhere.  With DMA you can explore Disney’s library of over 450 eligible digital movies, discover hours of new and exclusive short-form content, and watch your digital movies from the comfort of the living room or across multiple mobile devices.   You can add the free DMA app to a multitude of devices including iPhone, iPad, iPod Touch, Android mobile phones and tablets, Android TV, Amazon’s Fire tablets, Fire TV and Fire TV Stick, Roku, and Xbox 360. Then, connect your DMA account with participating providers including iTunes, Amazon Video, VUDU, Google Play, and Microsoft Movies & TV and your eligible movies will be shared across all your connected platforms.  In addition, you can redeem Digital Copy codes found in Disney, Pixar and Marvel Blu-rays and DVDs, as well as earn Disney Movie Rewards points with every digital purchase.

For over 90 years, The Walt Disney Studios has been the foundation on which The Walt Disney Company was built. Today, the Studio brings quality movies, music and stage plays to consumers throughout the world. Feature films are released under the following banners: Disney, including Walt Disney Animation Studios and Pixar Animation Studios; Disneynature; Marvel Studios; Lucasfilm; and Touchstone Pictures. The Disney Music Group encompasses the Walt Disney Records and Hollywood Records labels, as well as Disney Music Publishing. The Disney Theatrical Group produces and licenses live events, including Disney on Broadway, Disney On Ice and Disney Live!