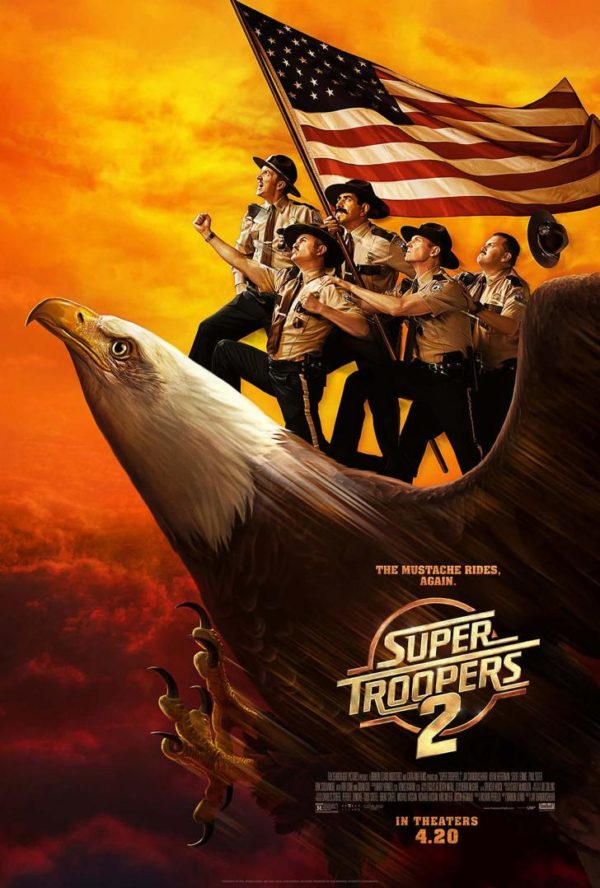 Almost 20 years ago, Super Troopers was released in theaters. The comedy, starring members of the Broken Lizard comedy team, wasn’t initially a hit, but it eventually found its audience when it was released on VHS and DVD, becoming a cult classic. The troopers finally return to theaters this year in Super Troopers 2, a crowd funded follow up to the original.

The movie picks up several years after the original ends. After a disastrous celebrity ride along, the officers have been fired from the Spurbury Police Department. Former patrol officers Thorny, Farva, Rabbit, Foster, and Mac are now living normal lives, far removed from their previous occupation. Fate intervenes though when the boys are called back into action by the governor of Vermont. They are asked to provide law enforcement for a Canadian town that is transitioning to a U.S. state after it is discovered that the land belongs to the United States. Their shenanigans are put to the test when they encounter mischievous Mounties, a drug smuggling ring, and the bitter citizens of the town.

Written by the Broken Lizard comedy troupe (Jay Chandrasekhar, Kevin Hefferman, Steve Lemme, Paul Soter, and Erik Stolhaske; they also star in it), and Directed by Jay Chandrasekhar, the film is more of the same, while not adding much to the proceedings. While the original had a certain comedic flow to it, this one felt like comedy sketches thrown together to try and make a coherent story. While a lot of it felt forced, it did have some great laughs.

The best part about the movie was the chemistry between the leads. It is a really fun cast. Broken Lizard have been doing this for a long time, and it shows every second they are on screen. The way they play off each other looks and feels flawless. The addition of Rob Lowe as a sketchy town mayor and a couple of cool cameos throughout the film was great. With that being said, I wish they had better material to work with.

Being a fan of Broken Lizard, I had my expectations set really high for this film. I should know better though. Most of the time, comedy sequels just don’t work. Much like video game movies, I’m waiting for one that breaks the mold and proves us wrong. I’m not saying that this is a bad film, it’s just not what I was hoping it would be. If you like the first film, you will no doubt have a good time watching this. If you hated it, you will probably be bored 5 minutes in. Proceed with caution.