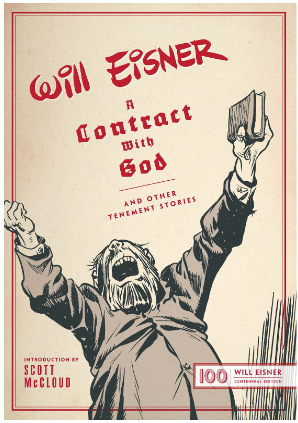 TEG+ has acquired the stage rights to Will Eisner’s cherished graphic novel A Contract With God and is adapting it into a Broadway musical with new and original songs written by a group of multi-platinum songwriters and Grammy Award winners composed of Sam Hollander (Panic! At The Disco, One Direction, Katy Perry), Lisa Loeb, Matisyahu, Ryan Miller (of Guster), and Jill Sobule. Hollander will also serve as music producer.  First published in 1978, A Contract With God is widely recognized as the very first — and also considered by many as the greatest — graphic novel in history, penned by one of the greatest cartoonists of all time.  The novel consists of four interweaving stories revolving around the lives,  struggles and dreams of infinitely relatable New Yorkers — many Jewish and many immigrants — living in a fictional tenement house.  All of the members of the songwriting team are Jewish musicians and composers wishing to honor their Jewish heritage and the Jewish legacy of this masterwork.  The team is about to enter writing and recording sessions, produced by Hollander. TEG+ is currently in the process of securing a book writer for the musical adaptation.

Says Hollander, “When Vivek sent me Will Eisner’s A Contract With God, I was instantly floored. Getting the chance to bring this seminal graphic novel to the stage in collaboration with an iconic crew of my talented Jewish pals is just the greatest thrill ever . It’s an amazing way for us all to honor our heritage while bringing this story of the 1930’s New York immigrant struggle to a new audience.”

Tiwary adds, “For me, A Contract With God was a formative ground zero for all my creative work. I never met Will Eisner, and still he is one of the great mentors of my life. Like Will, I was born in New York City, a child of immigrants who grew up surrounded by immigrant dreams, both beautiful and frustrating.  A Contract with God helped me understand both New York City and myself. I’m thrilled to now work alongside this group of top-notch inspiring Jewish musicians to bring a stage production of A Contract with God to both fans of the graphic novel and to inspire new audiences.”

A Contract With God joins the recently announced Broadway bound adaptation of beloved children’s book Harold and the Purple Crayon with original songs by the band AJR.  In addition to upcoming Broadway projects, TEG+ previously announced the acquisition of film and TV rights to adapt the story of The Lazy Susans, an unlikely rock band of suburban moms. TEG+ is in the process of securing a screenwriter and an A-list musician/composer to collaborate with the band.  TEG+ is also in development for a limited TV series The Fifth Beatle: The Brian Epstein Story. The Fifth Beatle is the only project about Brian Epstein, and the only non-documentary Beatles bio project, to have secured their music/songs. A Contract With God, Harold and the Purple Crayon, The Lazy Susans adaptation and The Fifth Beatle are part of a slate of ten new projects revolving around high profile music, the rest of which will be announced in the coming months.

This news comes on the heels of  Vivek J. Tiwary’s recent announcement of an equity investment to launch TEG+, expanding on his award-winning work at Tiwary Entertainment Group (Jagged Little Pill, American Idiot). With the recent addition of Jack Leslie, as  Co-President and Head of Film + Television and Elie Landau as Chief Operating Officer, TEG+ is primed to make an immediate impact in film and television. New company TEG+ will focus entirely on working with high profile original music, premier established music catalogs,  A-list musicians and composers — creating narrative entertainment for all forms of media and technology (stage, film, TV, NFT’s, etc.).

TEG+ can be found across all social media platforms at @TiwaryEnt