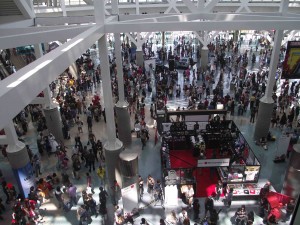 (Los Angeles, CA) – The 24th Annual Anime Expo (AX), presented by The Society for the Promotion of Japanese Animation (SPJA), will play host to over 100,000 lovers of Japanese animation and pop culture, July 2-5, 2015, at the Los Angeles Convention Center. Sneaking up in attendance right behind Comic-Con, this year’s show will mark the biggest presentation in its history, with the exhibition floor taking up nearly 350,000 square feet of space within the Convention Center’s South and West Halls. See: http://www.anime-expo.org/

AX 2015 will present over 300 exhibitors to attendees, including such entertainment industry companies as HULU, Warner Bros. Japan, Crunchyroll, Sony Music, Sanrio, Aniplex, Sentai Filmworks, FUNimation, and many others.

Adds Los Angeles Mayor Eric Garcetti, “Los Angeles is excited to welcome Anime Expo back to the L.A. Convention Center for the next five years. L.A. is the creative capital of the world and a perfect home for North America’s largest anime and manga convention.  We value our partnership with The Society for the Promotion of Japanese Animation and the Anime Expo, which generates $55 million for our local economy every year.”

Among the Highlights of this year’s AX:

** On July 2nd, legendary rock band KISS co-founders Gene Simmons and Paul Stanley will introduce to the United States the # 1 Pop Singing Group Sensation from Japan: Momoiro Clover Z (MCZ). The event will take place starting at 8PM at Microsoft (formerly Nokia) Theatre at LA Live. The event is the culmination of a highly successful collaboration between KISS and MCZ, which has resulted in a # 1 Record in Japan, an award winning music video, and a recent, unprecedented live show in Japan’s Toyko Dome by both bands. Here is SNEAK PEAK at that Performance: https://www.dropbox.com/s/qaiivapz4xe0np6/KISS%C3%97MOMOCLO%20at%20tokyo%20dome%20offline.m4v?dl=0

Tickets have JUST GONE ON SALE for this event:

** On July 3rd, Sanrio will present a special Fashion Show featuring the 40th Anniversary of the “My Melody” character from the “Hello Kitty” series.

** On July 3rd, the English dubbed version of “Sailor Moon Crystal” will make its U.S. debut. This is the first episode of the “reboot” version of this classic anime series.

** The Japanese Garden (of Van Nuys, CA) will produce and present its biggest and best AX customized Japanese garden for attendees to visit and photograph.

** The non-profit VGC (Video Game & Computer) Foundation will be presenting a truly unique exhibit comprised of One Example of Every Video Game Console Ever Sold to the Public!  Please see:  http://www.vgcx.org/ax-2015.html

Founded in 1991 at U.C. Berkeley, CA, by a group of anime aficionados, the Anime Expo is an annual celebration dedicated to bringing together members of the entertainment industry and fans of Japanese Pop Culture. The event is currently the largest anime and manga convention in North America. This year’s expo will be held July 2-5, 2015 (the show’s 24th year) at the Los Angeles Convention Center. The Society for the Promotion of Japanese Animation (SPJA), based in Santa Ana, CA, is the parent organization which funds and manages Anime Expo.

Popular Anime Expo events include: The Masquerade, Anime Music Video Contest, Concerts, and the Fashion Show. Anime Expo also offers late-night programming such as dance, video screenings, tabletop and electronic gaming, and open-mic karaoke. Many of the attendees cosplay while attending the convention. Cosplay lovers also participate in the dozens of AX events designed for fans of different anime, manga, gaming, and other media genres.

Renowned for its ability to bring famous guests to America for panels and concerts, Anime Expo has also been the site of many U.S. debuts of TV shows, movies, videogames, and bands. For more information, please see: http://www.anime-expo.org/

ABOUT SOCIETY FOR THE PROMOTIONAL OF JAPANESE ANIMATION:

The Society for the Promotion of Japanese Animation (SPJA) is a organization that works to promote Japanese Culture and the arts that are related to Japanese Animation. The SPJA has various ongoing projects that work to achieve this goal. These events are fueled by the dedication and support of a small workforce and over 1,500 impassioned volunteers.

The SPJA owns properties such as: Anime Conji – San Diego’s premier Japanese culture event, Anime Expo – the largest anime convention in North America, and Project Anime a business-to-business event dedicated to connecting – conventions, distribution companies, vendors, and each other for the purpose of “adding fuel to the fandom.”

The Society for the Promotion of Japanese Animation is a 501(c)(6) registered non-profit mutual benefit trade organization. For more info, please visit: http://www.spja.org/about-us/