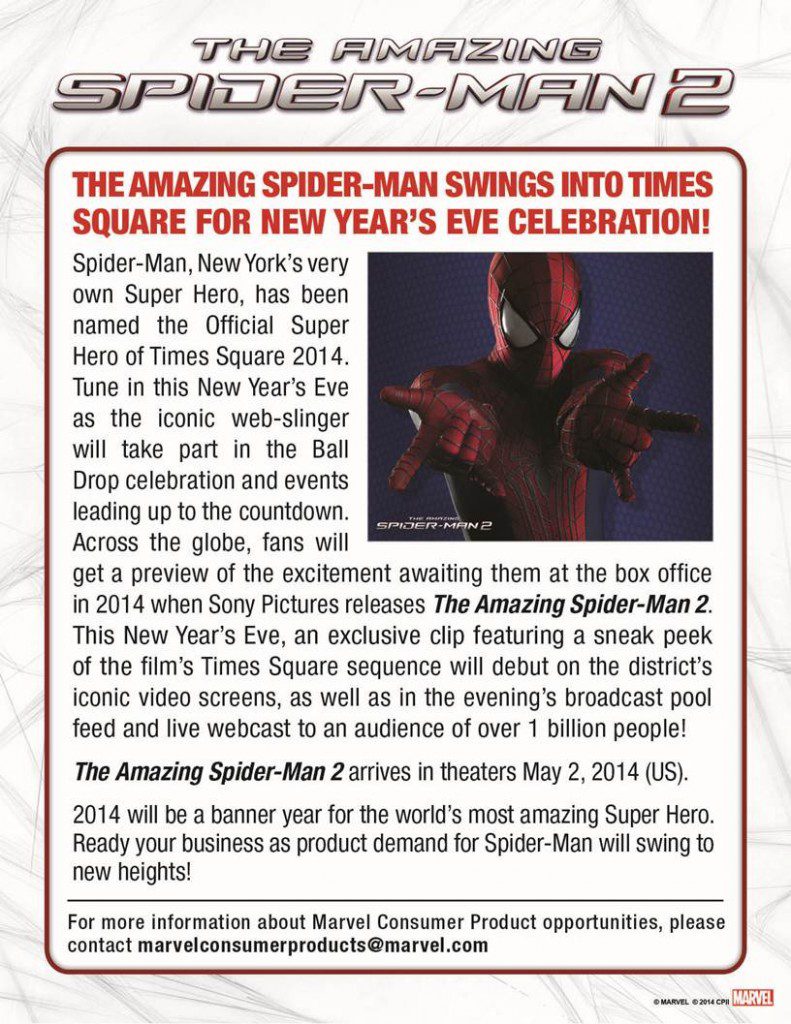 (New York)—Times Square Alliance and Countdown Entertainment, co-organizers of Times Square New Year’s Eve, announced today that Spider-Man, New York’s very own super hero, will be named the Official Super Hero of Times Square 2014. He will take part in the Ball Drop celebration, and events leading up to the big night in a partnership with the upcoming movie The Amazing Spider-Man 2™.

Across the globe, Spider-Man fans will get a preview of the excitement awaiting them at the box office in 2014. On New Year’s Eve, an exclusive clip featuring a sneak peek of the film’s Times Square sequence will debut on the district’s iconic video screens, as well as in the evening’s broadcast pool feed and live webcast.

“We welcome Spider-Man, an international icon who has always embodied the spirit of New York, to Times Square this New Year’s Eve,” said Tim Tompkins, President of the Times Square Alliance. “He will be an amazing addition to the program.”

“We’re thrilled that Spider-Man will be joining the Times Square New Year’s Eve Celebration,” added Jeff Straus, President of Countdown Entertainment. “We’re looking forward to everything being Amazing in 2014.”

“There’s no celebration like New Year’s Eve in Times Square,” said Marc Webb, Director of The Amazing Spider-Man 2. “There’s the sense of energy and excitement that you can only get in New York and we certainly felt that energy and excitement as we shot the entire film here. The people of New York City truly embraced our production, and it’s a wonderful feeling to be returning to Times Square to ring in the New Year.”

Fans wishing to meet Spider-Man on New Year’s Eve this year may have a chance. Qualifying entrants living in New York City, NY or one of the following surrounding New York Counties (Nassau, Westchester, Suffolk, Rockland), Connecticut Counties (Fairfield and Litchfield), and New Jersey Counties (Bergen and Hudson) can enter the #BEAMAZING Tweetstakes by following @SpiderManMovie and tweeting #BeAmazingNYE daily from December 6th through December 16th to enter.

To access footage of Spider-Man on the Times Square Ball go to epk.tv and click on The Amazing Spider-Man 2™ folder.

About The Amazing Spider-Man 2™

We’ve always known that Spider-Man’s most important battle has been within himself: the struggle between the ordinary obligations of Peter Parker and the extraordinary responsibilities of Spider-Man. But in The Amazing Spider-Man 2™, Peter Parker finds that a greater conflict lies ahead.

It’s great to be Spider-Man (Andrew Garfield). For Peter Parker, there’s no feeling quite like swinging between skyscrapers, embracing being the hero, and spending time with Gwen (Emma Stone). But being Spider-Man comes at a price: only Spider-Man can protect his fellow New Yorkers from the formidable villains that threaten the city. With the emergence of Electro (Jamie Foxx), Peter must confront a foe far more powerful than he. And as his old friend, Harry Osborn (Dane DeHaan), returns, Peter comes to realize that all of his enemies have one thing in common: OsCorp. Directed by Marc Webb. Produced by Avi Arad and Matt Tolmach. Screen Story and Screenplay by Alex Kurtzman & Roberto Orci & Jeff Pinkner. Based on the Marvel Comic Book by Stan Lee and Steve Ditko. The film will be released will be released in theaters internationally beginning April 16, 2014, and domestically on May 2, 2014.