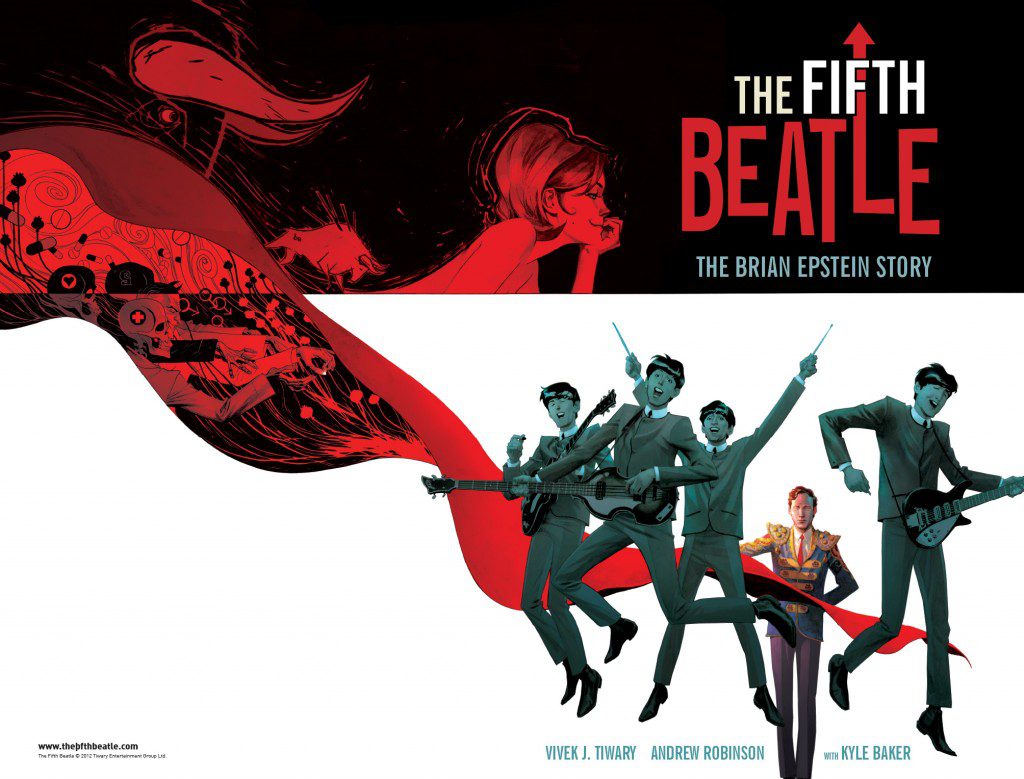 The Fifth Beatle To Be Published In Three Editions

By Staff Reports
(Milwaukie)—Ever since its announcement last fall, there has been buzz about THE FIFTH BEATLE. Written by multiple Tony Award–winning producer Vivek J. Tiwary (Green Day’s American Idiot, The Addams Family, Mel Brooks’s The Producers), The Fifth Beatle, chronicling the life of the Beatles’ manager, Brian Epstein, will officially be released on November 19.

The Fifth Beatle, from M Press Books, a division of Dark Horse Comics, recounts the untold true story of Brian Epstein, the visionary manager who discovered and guided the Beatles to unprecedented international stardom—yet died painfully lonely at the young age of thirty-two. More than merely the story of “The Man Who Made the Beatles,” The Fifth Beatle is an uplifting, tragic, and ultimately inspirational human story about the desire to leave behind a legacy, amidst the struggle to overcome crushing personal obstacles and insurmountable odds.

“Telling the Brian Epstein story is a true labor of love. The Fifth Beatle really is my life’s work—as I’ve been researching Brian’s life for more than half my own,” says Tiwary. “So it’s with great excitement and anticipation that I can finally share this little-known story about one of the great architects of modern pop culture with the rest of the world.”

Vivek J. Tiwary is also set to write and produce a feature-film adaptation of his graphic novel. Tiwary has signed a deal with Sony/ATV (who control the Lennon/McCartney music catalog) which gives him unprecedented access to Beatles songs for the film.

The standard hardcover edition will be available for $19.99 in an oversized library format. A collector’s-edition hardcover of this groundbreaking graphic novel will also be available, featuring a wraparound, textured cover and a section of bonus materials including Beatles and Brian Epstein memorabilia, artist sketches, and alternate covers, for $49.99.

The limited edition (1,500 copies) features a tip-in sheet signed by creators Vivek J. Tiwary, Andrew C. Robinson, and Kyle Baker, along with a twenty-four-page bonus section including rare Beatles and Brian Epstein memorabilia and behind-the-scenes sketches, a unique, textured cover, and a special slipcase, for $99.99.

Tiwary will be signing limited prints of The Fifth Beatle at BookExpo America in New York City this Saturday, June 8th at the Dark Horse booth #1003 at 11 a.m.

Additionally both Tiwary and artist Andrew Robinson will be delivering a panel presentation at HeroesCon in Charlotte, NC on June 9th titled: Comics of the Fab Four: The Fifth Beatle and Beyond. The panel begins promptly at 11:30 a.m.

“The Beatles will be bigger than Elvis!”—Brian Epstein, 1961

Tiwary is represented by David Alpert and Lawrence Mattis at Circle of Confusion.