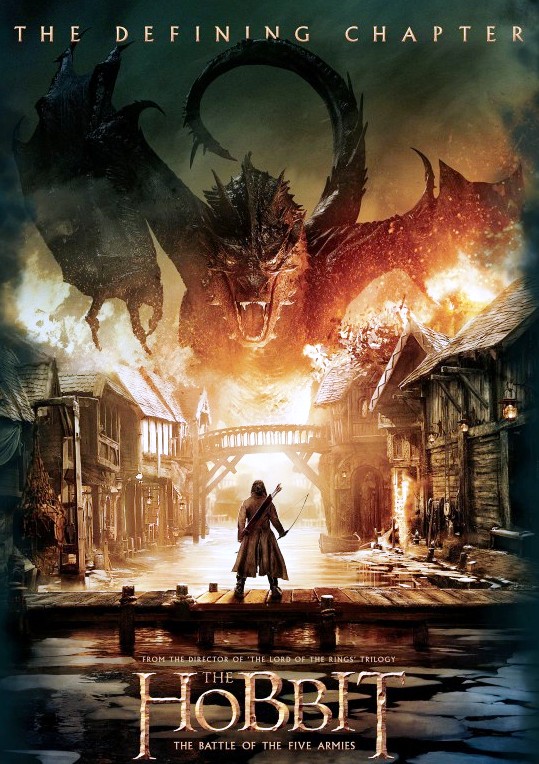 (Apple Valley)—The Hobbit, the prequel story to J.R.R. Tolkien’s Lord of the Rings, was expanded from 2 to 3 films, with the last film in the trilogy being The Battle of the Five Armies. Many were perplexed by the decision to make a third movie- why was a whole movie needed to finish telling the story of The Hobbit? After watching this film, nobody will be upset that this film exists: it’s the perfect finale to the lands of Middle Earth and easily the best film in The Hobbit trilogy.

This installment continues directly after the previous film, The Desolation of Smaug, as we see the evil dragon Smaug (Benedict Cumberbatch), destroying anything in his path. Humanity’s hope of these films, Bard the Bowman (Luke Evans), goes toe to toe with the monstrous Smaug, and this is all just the beginning of the film. The bulk of this movie focuses on, of course, the dwarves, led by their leader Thorin (Richard Armitage), holding down their kingdom, and more importantly, the riches inside, as armies from all around come to try to overthrow them.

The hobbit Bilbo (Martin Freeman), the wizard Gandalf (Ian McKellan), and the elves all try to reason with Thorin as greed clouts the new leader’s judgment. It’s a parallel of today’s society, as we see how greed corrupts, and how hard it is to overcome it. It can change a caring person into a self-obsessed monster. It’s a great meaning to address, especially during the holiday season.

Of course, as the title infers, we get a massive battle of various armies, all trying to gain control of the dwarf stronghold. The action is almost non-stop, from beginning credits to the end. If you want to see a huge, well-executed mythical battle, then you will not be disappointed. All the plots started with the first Hobbit film come to a close here, and masterfully. We see why the little hobbit Bilbo was far more of a hero than Lord of the Ring’s Frodo, and how the human characters have constantly been the heroes of the story.

I saw the film in 3D, and it was a very different experience. It felt like a stage show at times, like I was looking at a stage rather than a massive screen. This was a bit unsettling at first, but with scenes like the Smaug fight and the fight with the orc army, the 3D really made these intense scenes pop. The film blew me away, as it is in my top 5 films of 2014. For being a long film, it went by so fast, and I wish there was more to look forward to. I give The Hobbit- The Battle of the Five Armies a perfect 10 out of 10. This is the best film out of The Hobbit and Lord of the Rings trilogies, make sure to catch it in theaters, you won’t be disappointed.