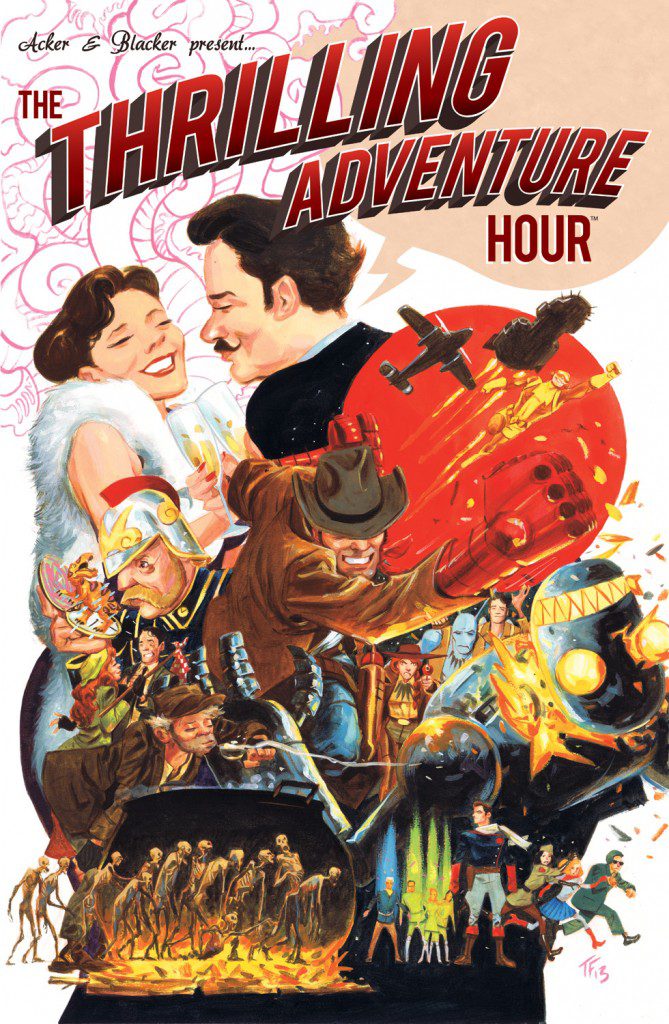 The Thrilling Adventure Hour (TAH) is a live stage show in the style of old-time radio performed monthly at the Largo of the Coronet Theatre in Los Angeles, California since 2005. Each episode of the show features original stories written by Ben Acker & Ben Blacker. These stories are  performed by the WorkJuice Players, a supremely talented and quite friendly troupe of comedians and actors from stage and screen. This cast plays characters from an ever-evolving array of recurring worlds and genres including BUT NOT LIMITED TO space westerns, hobo fairy tales, and screwball romantic ghost stories. In 2011, TAH started podcasting recordings of their performances under Chris Hardwick’s Nerdist Industries umbrella to both success and acclaim.  In 2012, TAH and Quixotic Transmedia ran a record-breaking Kickstarter campaign that enabled TAH to expand into other media, including a TAH graphic novel that will be released nationwide in late August 2013.

The Thrilling Adventure Hour Reception will be held at the Cartoon Art Museum in August, 2013. Coincidence?

About Archaia Entertainment, LLC
Archaia (archaia.com) is a multi-award-winning graphic novel publisher with more than 75 renowned publishing brands, including such domestic and international hits as Mouse Guard, Rust, Cow Boy, Cursed Pirate Girl, Gunnerkrigg Court, and Artesia. Archaia has also published an entire line of graphic novels in partnership with The Jim Henson Company, including the multiple award-winning Jim Henson’s Tale of Sand and such beloved tales as The Dark Crystal, The Storyteller, and Fraggle Rock. Alongside these celebrated titles, Archaia has released English translations of numerous renowned foreign titles to much fanfare, including The Killer, Sergio Toppi’s Sharaz-De, and The Secret History.

In addition to its partnership with The Jim Henson Company, Archaia has forged creative partnerships with storytellers in all facets of the entertainment industry, resulting in print and digital expansions of such noted properties as Bleedout and HAWKEN (video games), Immortals and Planet of the Apes (film), and Space: 1999 (television).

Archaia has built an unparalleled reputation within the creator community for producing meaningful, transformative content, building one of the industry’s most visually stunning and eclectic slates of graphic novels.

About The Cartoon Art Museum
Founded in 1984, the Cartoon Art Museum is the only museum in the western United States dedicated to the collection, preservation, study, and exhibition of original cartoon art in all forms to benefit historians, cartoonists, journalists, artists, collectors, and the general public. Please visit www.cartoonart.org for more information.