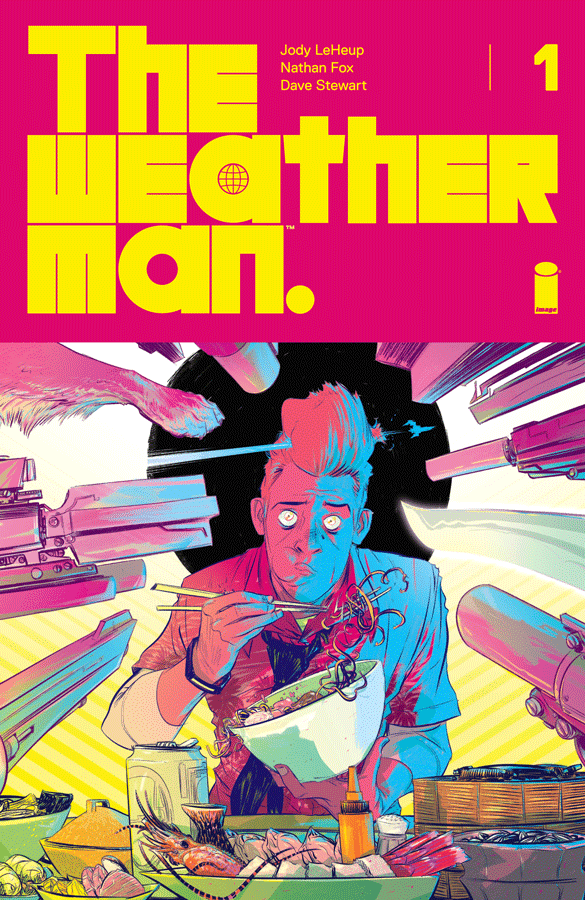 The Weatherman Takes Industry by Storm

Image Comics is pleased to announce that, in order to keep up with overwhelming customer demand, THE WEATHERMAN #1 by Jody LeHeup (SHIRTLESS BEAR-FIGHTER!) and Nathan Fox (DMZ, HAUNT, Dark Reign: Zodiac) is being fast-tracked for a second printing.

“I know Nathan and I speak for the whole team when we say that we’re thrilled by the tremendous response we’ve received for THE WEATHERMAN #1, and we can’t wait to share more of our story,” said LeHeup. “It’s going to be a hell of a ride.”

THE WEATHERMAN #1 introduces Nathan Bright—a man who had it all: an awesome girlfriend, a kickass dog, and a job as the number one weatherman on terraformed Mars. But when he’s accused of carrying out the worst terrorist attack in human history—an event that wiped out nearly the entire population of Earth—Nathan becomes the most wanted man alive and a target of a manhunt that spans the galaxy. But is Nathan truly responsible for such a horrific crime? And why can’t he remember?

THE WEATHERMAN #1, 2nd printing (Diamond Code MAY188562) will be available on Wednesday, July 11th. The final order cutoff deadline for retailers is Monday, June 18th.

Select praise for THE WEATHERMAN:

“A highly intriguing concept, with real breathing characters, and great velocity, expertly executed by a team of A level talents all dumping their entire asses in. Sure, there are many comic books to choose from, but don’t pass on The Weatherman.” —Rick Remender

“Great writing and artwork add up to a story I want to keep reading.” —Garth Ennis, THE PRO, Preacher, Punisher MAX

“Weatherman #1 is a series you can’t miss. Filled with an intriguing and bonkers premise mixed with stunning visuals that are out of this world. It’s purely creative, unique and one of a kind.” —Geek.com

“Really entertaining and a comic I really want to see where it all goes. This was one that sucked me in quickly and by the end I had a smile at the energy about it all. A solid debut that’s a definite buy.” —Graphic Policy

“A madcap, unpredictable adventure that looks like a million bucks.” —Doom Rocket

“Defying genre conventions and story expectations all at once is a rare feat, and rarer when it’s done with elegance and wit. The Weatherman doesn’t just flip the table on your expectations—it lays you out and then sets fire to the restaurant as it leaves. Buckle up, folks: this book is going to take you for a ride.” —Greg Rucka, LAZARUS, Queen & Country