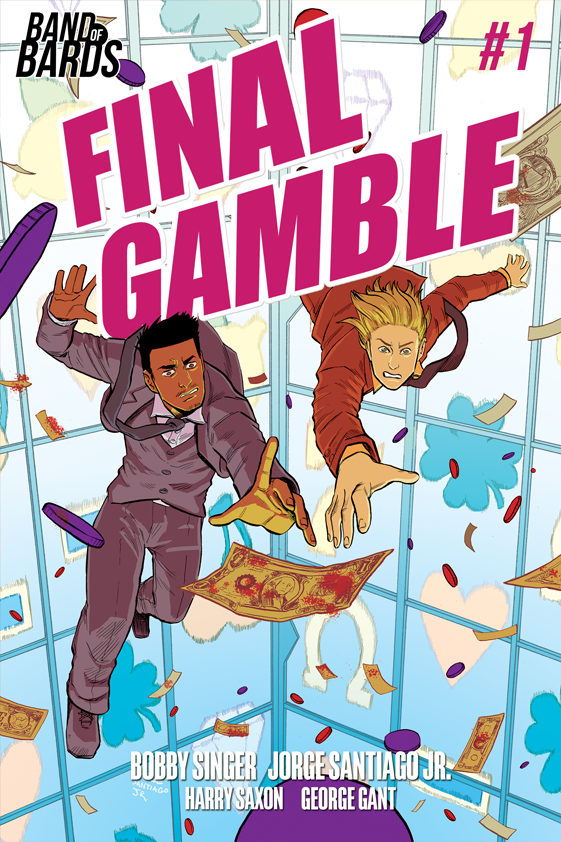 Throw your hand and Kickstart…Final Gamble!

Band of Bards is proud to announce its debut release, Final Gamble, a dark social commentary about the grip of predatory society, created and written by Bobby Singer (Flame Angel, Paul) with art by Jorge Santiago Jr. (Spencer and Locke), colors by Harry Saxon (The Miracles, Vagrant Queen), and letters by George Gant (Beware of Toddler). Just think, if you play your cards right, you might get to walk away free.

Gambling addict Danny Lin, and disgraced MMA fighter Jasmeet Khanna have both fallen on hard times. Owing an enormous amount of money to a loan shark named Mandy, they are offered the chance to save themselves by winning the money they need—in a game of poker against her. Unable to work together, the two men are easily defeated. As a result of their defeat, the two become prisoners of The Mercury Society, a group composed of the richest and most powerful people in the world. In this unforgiving Hell, people are forced to fight to the death in an elite gamble for their souls.

“When I was writing Final Gamble, I had Jorge’s art specifically in mind, and actually getting him to draw the book was a dream come true,” said Bobby Singer. “Working with him has been both an honor and a pleasure. Band of Bards believed in me and my story when other publishers wouldn’t and for that, I’ll always be grateful. Tim Stolinski and Chris Benamati are great guys to work with, and I’m so glad they’re taking a chance on me and my funky gambling comic!”

“This was a really fun and interesting project to take on,” said Jorge Santiago Jr. “It’s been a great challenge to convey stress and tension in these situations where the doom is far more terrifying than the current moment. As a fan of gambling stories, I think this will be a great story for people who enjoy watching characters walk the tightrope of success and failure!”

As a new publisher, Band of Bards is taking the step to ensure creators come first by adding front end compensation into their Kickstarter campaigns. The goal is to create a balance of power which all comics creators deserve, and it is only the beginning of how they intend to change the landscape of the industry.