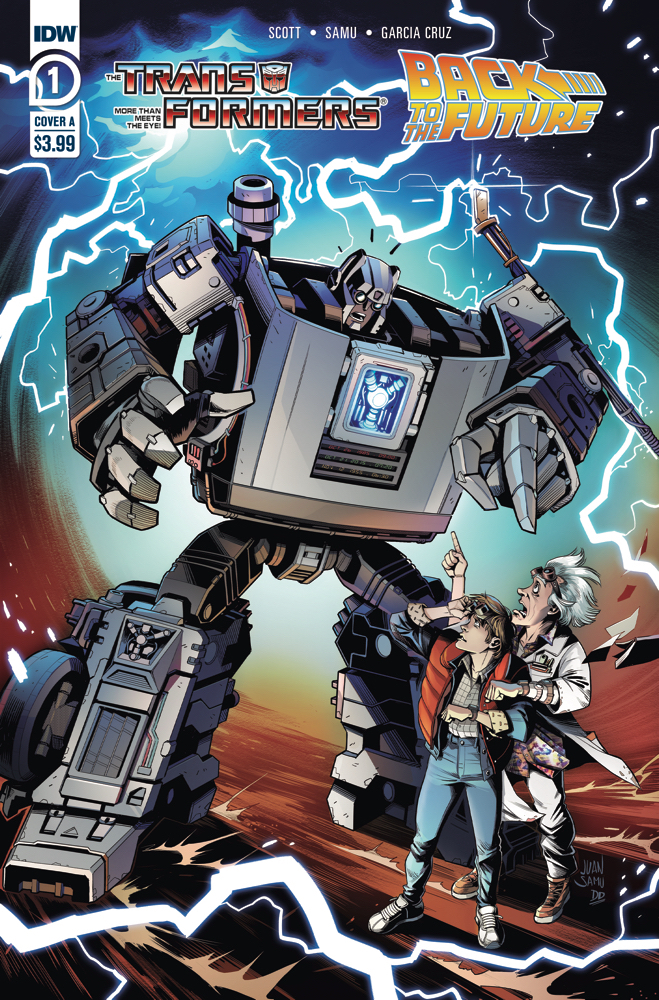 Transformers Back to the Future #1 Review: This is Heavy…Metal

Peanut Butter and Jelly. Macaroni and Cheese. Pineapples and Pizza (yes, I said it). Some things are just meant to be together. So, imagine my excitement when I heard that IDW was putting my two favorite 80’s properties together! I had to read it, and it did not disappoint.

My favorite Back to the Future movie is Part 2. So, I was really excited to see that the comic starts at the beginning of Part 2. Doc has just dropped Marty off at home following the events of the first movie. Little does he know that he is being watched by the evil Decepticons who want to get their hands on his time machine. When Marty wakes up the next day, he is expected that he will find the new future he created after visiting 1955. Wrong!

The new 1985 is a dystopian wasteland even worse than Biff’s 1985 alternate reality. The Decepticons have enslaved humanity, and Biff is a sympathizer with the evil robots. With Doc nowhere in sight, how will Marty survive long enough to undo this terrible new timeline? To Be Continued…

I have to admit that I am a little biased about this comic because of my love for the two franchises. That said, this is a great comic! It is fun, funny, and funky!

Writer Cavan Scott tells a fast-paced and intriguing story that throws readers into the events of Back to the Future while also including the action and adventure expected of a Transformers story. It is an excellent blending of 2 beloved properties.

Artist Juan Samu faced a daunting task. He had to take two franchises that people love and put them both together in his style and make them look cool. He knocked it out of the park. Between the BTF characters and the Rock-em Sock-em robot action, he tells a great visual story that matches the action-packed story.

Daniel Schwartz has been a Pastrami Nation contributor for over four years. He is a father of 4 and husband of 1. He is a massive fan of all things Sci-fi and fantasy, including Game of Thrones, Star Trek, and the Arrowverse. You can follow him on Instagram at two sites, @tvnerddude, and @arrowverseweekly.

Daniel Schwartz
0
Tags :
Transformers Back to the Future #1 Review: This is Heavy...Metal