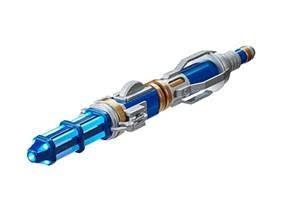 This new toy version is a faithful recreation of the current Doctor’s (Peter Capaldi) Sonic Screwdriver, which made its debut in the season nine episode, “Hell Bent.” This is the first Sonic Screwdriver toy to have four light modes and four sound effects.

For a limited time only, exclusively on BBC Shop and BBC Doctor Who Shop, fans will receive a gift with the purchase of the new Sonic Screwdriver – an exclusive pack of trading cards from the Twelfth Doctor’s limited edition – while supplies last.

The Doctor has carried many Sonic Screwdrivers of various designs throughout his lifetimes, using the numerous settings on the multipurpose tool to open most locks, detect all manner of deadly rays, read bio-signs, and generate sonic waves of great power. This second Sonic Screwdriver for the Twelfth Doctor was “gifted” to him by the TARDIS after his previous version was lost.

About BBC Worldwide North America
BBC Worldwide North America is the main commercial arm and wholly-owned subsidiary of the British Broadcasting Corporation (BBC) operating in the U.S. and Canada. The company exists to maximize the value of the BBC’s assets for the benefit of the UK license payer and invests in public service programing in return for rights. The company operates four businesses in the territory – linear and digital content sales and co-productions, consumer products, BBC.com, and two production divisions – BBC Worldwide Productions, responsible for the smash hit Dancing with the Stars and the U.S. version of Top Gear; and Adjacent Productions, producers of Da Vinci’s Demons, Life Below Zero, and Ladies of London, among others. The company also owns a 50.1% share in cable channel BBC AMERICA through a joint venture with AMC Networks.