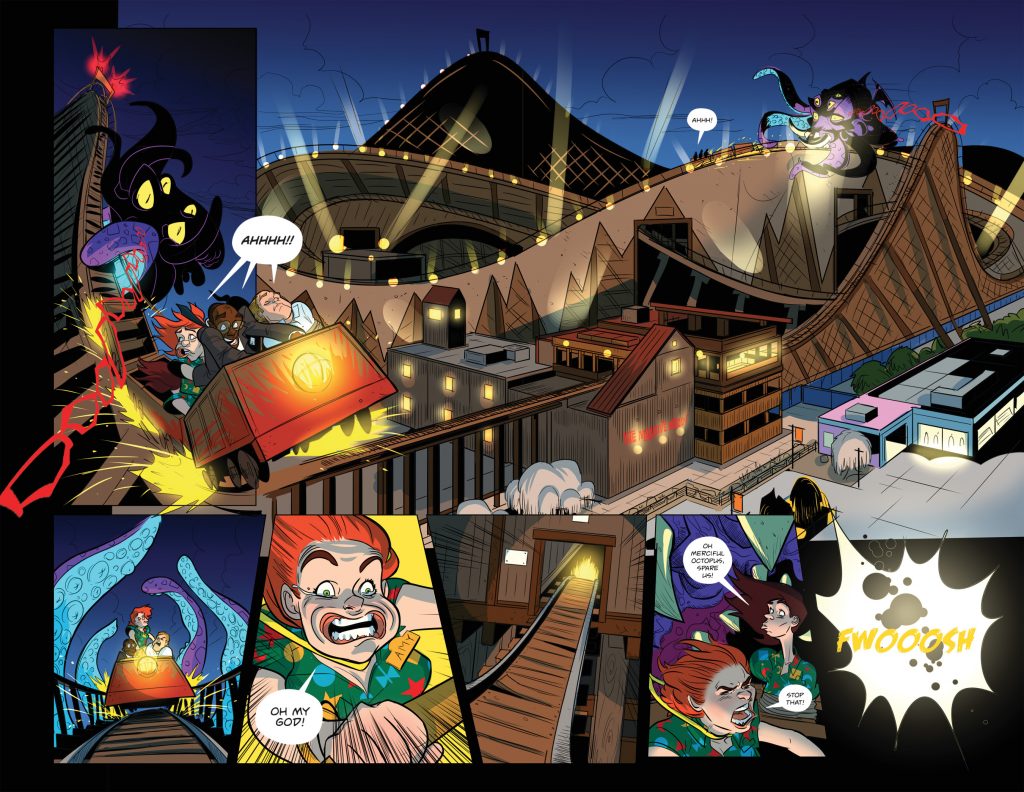 Amy is too clever, too creative… and far too comfortable with her job at the local amusement park, but that’s about to change.

This summer, from Action Lab Studios, brothers and co-writers John Matsuya and Ben Matsuya (Jupiter Jet) take thrill-riders on the twist and turns of their all-new hilarious theme park horror OGN, Midnight Massacre! Grab on and hold tight as this passion project of eight years sets readers roaring and reeling at every roundabout.

When the corporate executives of a theme park conjure real monsters for their Halloween “Midnight Massacre” spectacular, all hell breaks loose – literally. It’s up to Amy, a jaded games employee, to buck up and team up with friends to send the hellspawn back from where they came.

Action-packed and full of sardonic (or in this case, satanic) wit, Midnight Massacre is one indie comic to give Scott Pilgrim Vs. The World and Shaun of the Dead a run for their money.

“If you’ve ever worked a job you hated, adore Halloween, or love haunted mazes and roller coaster rides, we wrote Midnight Massacre just for you,” said John Matsuya. “Our independent graphic novel is an action-comedy for people who know that sometimes there are things scarier than marauding zombies – like feeling stuck in a daily grind with the dumbest boss alive, wasting away your time on a starvation wage, questioning all of your decisions as you traverse forward towards an uncertain future. If that hits a little too close to home, I hope you’ll read our original comic book for a roller coaster of a romp that will make you laugh, make you scared, and inspire to you shake things up a little.”

“This story is very personal to my brother and I,” said Ben Matsuya. “We wrote it while my brother was working a dead end corporate job: I was reflecting on a summer working a menial, seasonal theme park gig, and our father was being laid off from his job, of over 30 years. But it’s a funny story, I swear. In an effort to channel our rage and discontent into something productive, we started writing. The moment it clicked for us was when we saw the absurd parallels between corporate America and a Halloween theme park horror show. Sprinkle in a healthy dose of punk rock and horror movies satire and 8 years later you’ve got Midnight Massacre!”

Nolan Smith
0
Tags :
Two Brothers Team Up to Create a Tale That’s One Humorous HELL of a Thrill