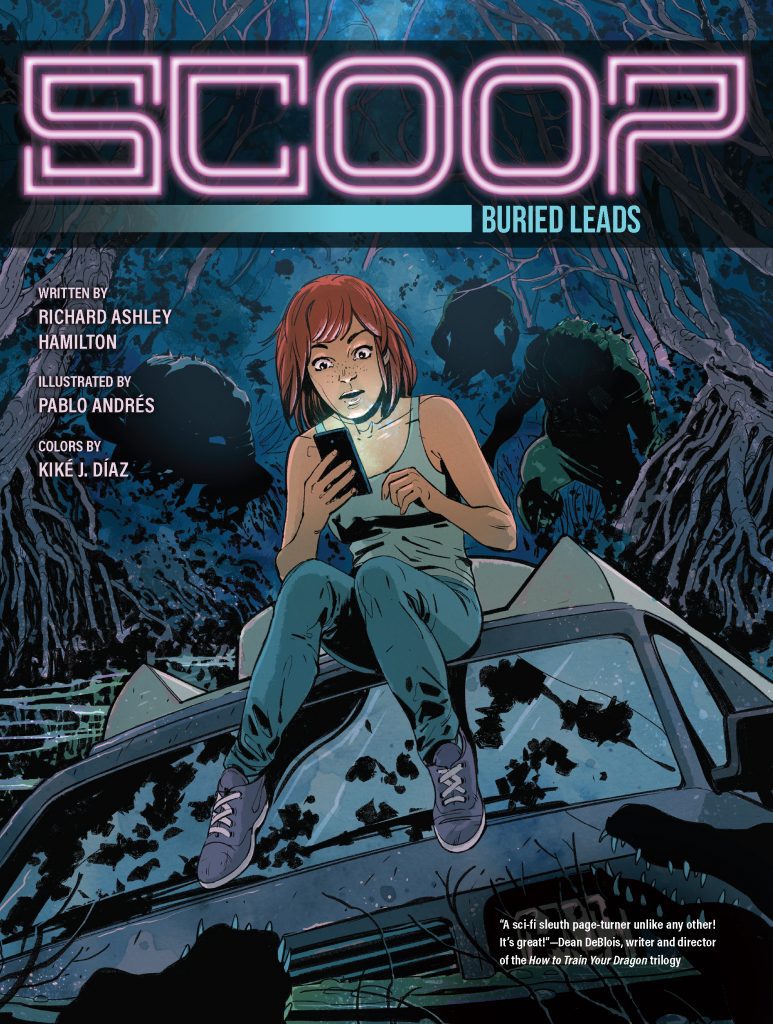 Veronica Mars Has Nothing on Sophie Cooper

Richard Ashley Hamilton (How To Train Your Dragon, Trollhunters) has penned a comic for the times; a culturally authentic love letter to his hometown of Miami, sparked by personal experiences and run-ins with 90s newsworthy headliners and legends. Insight Editions are proud to announce Scoop: Buried Leads, written by Hamilton, with art by Pablo Andrés and colors by Kike Diaz (Over the Garden Wall: Hollow Town)!

Sophie Cooper’s newfound fame as a teen TV news intern/paranormal whistleblower leads to her next case, when a famous local chef in Miami is charged with the murder of his ex-wife. Despite overwhelming evidence, the hometown hero maintains his innocence and wants Sophie’s help in finding the “real killer.” At the same time, a new extraterrestrial presence in Florida’s Everglades reveals startling ties to Sophie’s past. Can she solve this crime and learn the truth behind the UFOs, considering Sophie also has to deal with her hectic internship at WMIA 7, upcoming Quinceñera, and the overwhelming drama of high school?

“This is the mystery I’ve been plotting since high school, which was inspired by O.J. Simpson moving to my Miami neighborhood after his acquittal—and believe me, the controversy, headlines, and general weirdness of his presence affected everyone,” said writer Richard Ashley Hamilton. “This rings just as true today in our culture that’s grown increasingly polarized about facts and the news. The same goes for Sophie, a truth-obsessed teen, who is trying to clear her family’s name in the middle of a massive sci-fi conspiracy. I am blown away by how uncannily timely this whodunit has become. But most of all, I’m proud of how Pablo and Kike did our story justice by rendering Sophie, her diverse circle of friends, and my hometown in such an authentic and beautiful way.”

Scoop: Buried Leads is available from Insight Editions on Feburary 23, 2021.

Nolan Smith
0
Tags :
Veronica Mars Has Nothing on Sophie Cooper