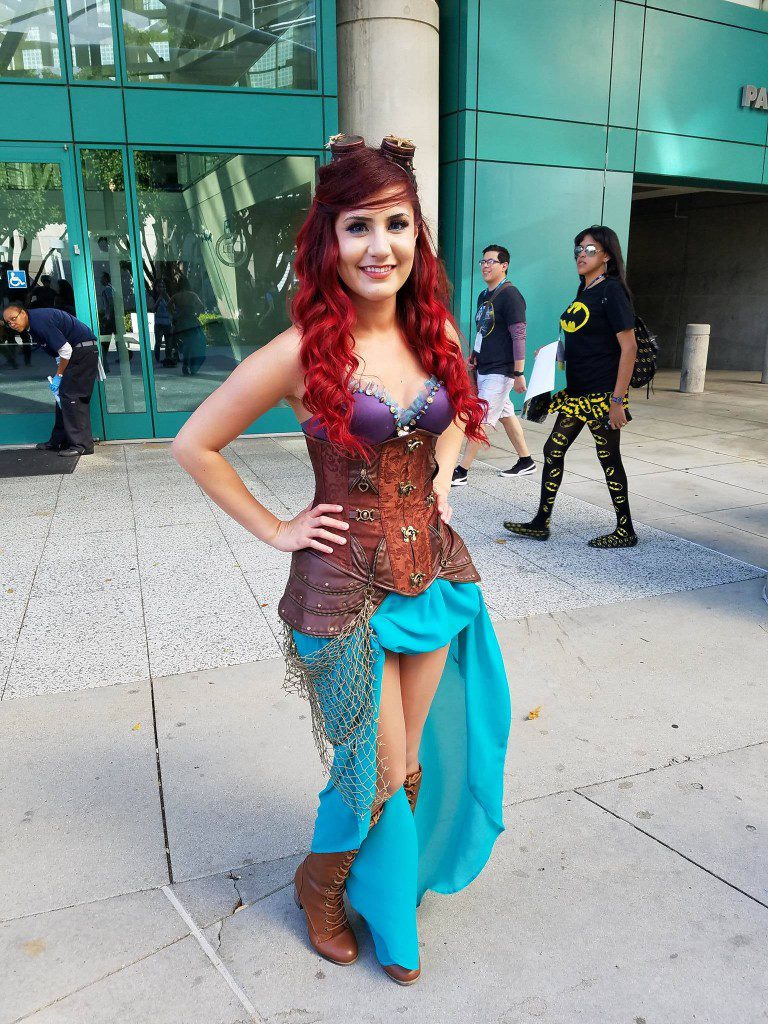 (Victorville) WonderCon, the massive comic book and pop culture convention, was a hit this past weekend, with costumes, or cosplay, around every turn. For Victorville resident Rebecca Rubio, she dove ‘Under the Sea’ and brought to life a cosplay inspired by Ariel from Disney’s The Little Mermaid, but with a twist.

Rubio, a huge fan girl when it comes to DC Comics, made the decision to give cosplay a try at one of the largest conventions in Southern California. A fan of not only DC Comics, Rubio loves television shows and movies like CW’s The Flash and the just released feature film, Batman V. Superman: Dawn of Justice. So why the decision to pick a Steampunk version of The Little Mermaid for her first foray into cosplay?

“I really like the Steampunk style and The Little Mermaid is one of my favorite Disney characters,” said Rubio. “I also wanted to cosplay a character that had red hair because that’s my favorite hair color and I knew there would be a good chance I would dye my hair red. I like to get in character as much as possible.”

The Steampunk genre is a sub genre of science fiction, focusing primarily on the Victorian Era, and with an emphasis on if the power of steam had been pushed more to the forefront of everything. The Steampunk genre is known for the use of goggles, gears, and to incorporate them into something you might see back in Victorian London. “I had to do a lot of research,” said Rubio. “I knew what I wanted but the problem was I had a lot of ideas and I didn’t know how to go about incorporating and executing them. The challenge for me was to condense the ideas to have a simple but strong cosplay that wasn’t over the top but still legit.”

Creating the cosplay was one thing, but to wear it out to not only just a public gathering, but to one of the major conventions to hit California, had to be nerve racking. So how was the experience for Rubio’s Little Mermaid? “It was great! I got “caught” literally before I even checked in for my badge. My first ask for a picture was a little girl. The best part is just seeing what everyone comes up with. It’s pretty cool when people dress us and you appreciate the hard work they put in their costumes.”

After a successful outing, Rubio is already brainstorming on what she will don at next year’s WonderCon. WonderCon 2017 will be held March 31–April 2 at the Anaheim Convention Center in Anaheim, CA. For more information on WonderCon, visit www.comic-con.org/wca.