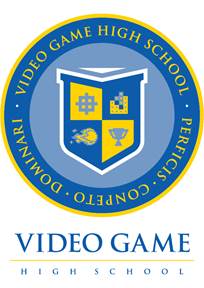 By Staff Reports
(Los Angeles, CA)—Rocket Jump Studios in collaboration with Collective Digital Studio announced today that the highly-anticipated second season of the breakout online action-comedy scripted series Video Game High School will premiere on RocketJump.com and YouTube in mid-July timed to San Diego Comic Con.   The new season, from Freddie Wong, co-creator of the YouTube phenomenon that is FreddieW, and Matt Arnold, VGHS co-creator and co-founder of RocketJump.com, follows the blockbuster first season – which garnered more than 55 million views across its nine episodes and behind-the-scenes content to rank among the most watched original scripted digital short-form series of all-time. Set in an alternate reality where professional video gaming becomes the biggest spectator sport in the world, Video Game High School 2 will once again take viewers to the campus of the elite competitive gaming academy for a fun-filled thrill ride that mixes drama and comedy with tense action that plays out in the heightened world of video games — from high-octane racing to explosive first-person shooters.

From the creative minds of Wong – whose YouTube channel FreddieW has become one of the platform’s biggest hits with more than 5.5 million subscribers and over 800 million views of its programming – and Arnold, Video Game High School 2 will amp up the action, excitement and special effects infused by a record-breaking Kickstarter campaign, which topped $800,000, ranking among the most funded film/video projects to date.  Additionally, the new season will feature the Dodge brand as its presenting sponsor with a tricked out Dodge Dart showcased in the series’ drift racing sequences.

And if that wasn’t compelling enough, Video Game High School 2 breaks new ground by being the first show ever shot in mixed-frame rate: a revolutionary blend of cutting edge and classic cinematic technologies.  The videogame sequences in the new season are brought to vivid life in 48fps (a format recently pioneered by Peter Jackson in The Hobbit), while the other parts of each episode are presented at a traditional 24 frames per second — preserving the cinematic look Video Game High School is known for. This unique viewing experience will be presented on RocketJump.com.

Blending Harry Potter Hogwarts action with comedy reminiscent of John Hughes’ classic young adult films, Video Game High School was hailed by Wired Magazine for “…undeniably setting the bar for online production design.” The series centers around Brian D, an aspiring pro gamer who in the first season landed an invitation to Video Game High School, the most prestigious gaming academy in the world.  Season two will take place over six TV-length episodes, for a total of more than 120 minutes of action-packed goodness.  After a shocking scandal puts first-person shooter (FPS) star The Law in handcuffs and VGHS’s reputation on the line, it’s up to Brian D and his girlfriend Jenny Matrix to take the embattled FPS team to victory and redemption.  Turbo-charged battles will unfold, comedy will ensue and hearts will break as Brian, Jenny and the rest of the VGHS squad take on the toughest gamer schools in the world for ultimate supremacy. The first episode is expected to debut in mid-July at RocketJump.com

“Fan support for VGHS was greater than anything we could have ever imagined and we feel privileged to have been able to film a second season,” said Wong.  “The new episodes take the story to a whole new level and we’re sure that our viewers will be excited to see what happens to the whole crew.”

While VGHS Season 2 is their latest and most ambitious project, Wong and Arnold have already established themselves as pioneers in online video and filmmaking.  Their web site RocketJump.com features awe inspiring, professionally produced, mind–bending videos from a variety of the biggest YouTube Channels.  Additionally, the success of FreddieW, from Wong and his partner Brandon Laatsch, has become one of the biggest You Tube success stories with more than 5.5 million subscribers and over 800 million views of programming – causing Business Insider to hail the FreddieW team as “The world’s most powerful YouTube stars.”