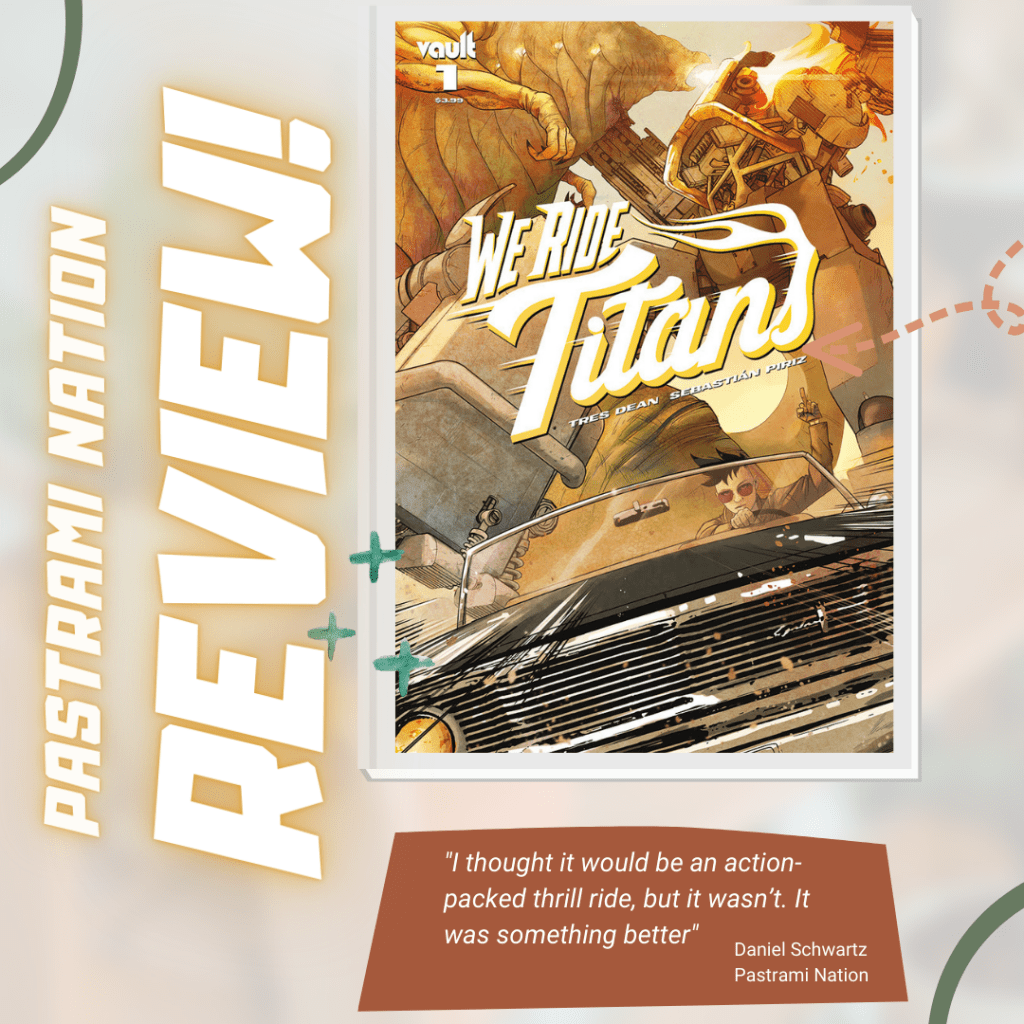 I have always been a big fan of the movie “Pacific Rim” (the first one, not the second). Giant monsters from another dimension fighting giant robots for the sake of humanity is a really great concept and provides a lot of action and adventure. That is why I wanted to pick up the first issue of “We Ride Titans.” I thought it would be an action-packed thrill ride, but it wasn’t. It was something better.

The story begins with an action sequence where a Kaiju is attacking a city, and a giant mech is fighting to defend it. The mech is piloted by Dej, who appears to be drunk while he is fighting. While finding a way to win, Dej causes far more destruction than he would have sober. He is immediately grounded. That is where Kit comes in.

It turns out Kit is Dej’s sister. Their family has been operating the mechs (Titans) for generations defending their city. Kit has left the family business and seems to have found happiness with a new life and her wife, Jen. That is until her mother (with whom she seems to be estranged) convinces her to drive the Titan until her alcoholic brother can recover and get treatment. Once she returns to her parent’s place, she has a tense argument with them and makes it clear that she wants to get to business with as little interaction with them as possible.

That is a lot to unpack for one issue. On the surface, this appears to be an action series. I am sure there will be plenty of action, given the premise, but this story is about family. There are a lot of mysteries that need to be explored in future issues. What drove Kit away from the family? Why is Dej an alcoholic? Was the father injured in a previous fight (he is wheelchair-bound)?

Writer Tres Dean creates characters and family drama that keep your interest. I want to know the answers to the questions above, and that is a great indication that the writing was excellent. Artist Sebastian Piriz also shines. The Kaiju and the Titan visuals make you feel like you are in the middle of the fight.

Rating: 4.5 Pastrami Nations out of 5 This is a great beginning to what looks to be an incredible action/drama series.